You are here: Home / Yoga Articles / Deepening • The Yoga of Life / Yoga & Body Image / The Real Stories Behind The Top 4 Yoga Myths 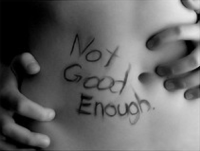 Yoga Myth #1: Your body is not enough

The internet is full to bursting with articles debunking the ‘Top Yoga Myths’.

They tell us that contrary to poplar belief, Yoga is not a religion, that it’s not just for skinny, rich, flexible young women, and that it really is good exercise, as well as a holistic spiritual experience.

Opinion is divided in these articles as to whether yoga really does or doesn’t give you great abs and fantastic orgasms. But, in general all these articles paint the same picture.

Don’t be afraid, they say. Don’t be discouraged. Yoga is for everyone. It will make you feel good.

But is that really true?

Because sometimes it sure as hell doesn’t feel like it.

And even though these mainstream websites, with thousands of readers are promoting an inclusive and open approach to the practice of Yoga, these so called ‘Yoga Myths’ are incredibly powerful, and can’t easily be dispelled in a five hundred word word article. Or with a plethora of said articles.

Part of the problem is this: these article don’t actually debunk the real Yoga Myths. They just tap at the surface.

I’m curious. What’s really behind the Top Yoga Myths? Why are the myths so strong?

What is it that really makes us feel that we are not ‘enough’ to practice yoga, or that infuses our yoga practice with fear and self-loathing? Maybe they contain an element of truth.

What I see in these Yoga Myths is how yoga acts as a mirror to our societal beliefs and tendencies. We’re not seeing yoga as IT is but as WE are.

The things we believe hold us back from fully inhabiting our bodies and our Yoga practice are not only common to Yoga. They are reflections of who we are and how we act as a society.

In particular, because we tend to understand modern day Yoga as primarily a bodily practice, our body and appearance obsessed culture is particularly aggressive in how it markets and promotes Yoga to us.

Yoga studios, teachers and businesses end up using images that reinforce the myths of the perfect body, the dominance of young, skinny, white women in the yoga world and a sense of exclusivity.

These are the stories we unwittingly tell ourselves as a society through the images we use. (Or that are told to us, by advertisers and marketers).

There’s something very deep and resonant about all of these myths that particularly affects us at human beings. They hit us right in the gut, and they have the power to make us feel very small, or very incapable, or very alone.

Which is why I’ve also tried to debunk each myth and provide a touch of hopeful reality alongside the stale and hurtful old stories.

1. Myth: Your body is not good enough

This is the category includes the classic ‘I’m not flexible enough to do yoga’ but also ‘I’m not skinny, beautiful, young, sexy, or fashionable enough’ to do yoga. It’s a classic advertising technique that stokes insecurity and activates the urge to improve our bodies with various purchases, exercise plans, or surgical options – or, yoga classes.

It also really hurts to be told that the body that we live with day in, day out, the body that carries all the stories of our self and life, is not valuable or beautiful enough.

Reality: You are always enough

You might find it hard to believe, but you and your body are always enough. Always. They just are. There’s no real reason why anybody else should be able to convince you otherwise. And, as you consistently show up to the mat and practice yoga, you begin to learn from the inside out, that you are enough. That you don’t need fixing.

You learn that Yoga is suitable for every body, be they injured, strong, inflexible, young, curvy, weak, old…. Yoga is a place to embrace the vulnerability of your body, as well as revel in it’s strength and beauty. (Which has nothing to do with how much you are like a size zero supermodel.)

This is the myth that stops men doing yoga, as well as anyone that doesn’t fit the skinny, young white women yoga image. Older people, less able bodied people, and people of different cultures are powerfully affected by this one.

It tells us that we don’t belong here, we’re an outsider, we’re not good enough, this isn’t for us…

I imagine it’s an old, old myth. The pain of being cut off or being an outsider shows up in ancient literature and art (The Ugly Duckling anyone?), as well as being a strong myth in modern day life.

Reality: There’s always a place for you in Yoga

In her analysis of The Ugly Duckling, psychoanalyst Clarissa Pinkola Estes asks:

Her perspective promises that although we do not fit in in some places we will always eventually find our tribe of swans (or cats, or hens) where we will be at home. We are in no way inferior for not being successful Ashtanga or Bikram or Iyengar or Whatever yogis.

There are enough styles of yoga and yoga communities out there for us all to find our Yoga tribe. And if not we’ll create new ones together. One of the fun things about modern yoga is how fast it is evolving and expanding.

However, one does have to note that in the Yoga world and in society at large the barriers that make Yoga exclusive to certain groups are often socio-economic.

The socio-economic barrier to people’s participation in yoga is one that we yogis have a responsibility to do something about. We need to reach out and welcome in those who are excluded because of class, finances or circumstances.

The Yoga Lunchbox readers are already taking yoga out of middle class yoga studios and are teaching yoga in prisons, starting up therapeutic and trauma informed yoga classes for maginalized communties, and helping refugee and asylum-seeking women find strength through yoga.

3. Myth: You don’t have enough time

This the the myth of the 21st century, where stress and business are an accepted, expected, and even rewarded part of modern day life.

Taking the time to sit quietly on a yoga mat can seem like a nonsensical thing to do in a world so packed with things to do and buy and watch. There are just so many other things that you could/should/want to be doing.

Reality: You make time for the things that are important to you

It’s simple. Making time to do the things that nourish you, whatever they are, is vital to your survival and ability to function and thrive.

If Yoga is important to you then you can find time for it. It also helps if you believe you deserve it – that Yoga is not a luxury but a necessity of life.

It most definitely doesn’t have to be a lot of time. A seven minute or eleven minute practice every day can be deeply nourishing. Maybe a few minutes lying in a restorative yoga posture. The less time you think you have for spending a couple of minutes meditating, or doing yoga, or even just sitting down with a cup of tea every day, the more you need to do it.

Buying new things is the way to happiness. Want to be a yogi? You’ve got to have the right gear. Try starting with a couple of Lululemon outfits – pants, shorts, crop tops, singlets, a Manduka mat, an exotic yoga retreat in a third world country, a juicer, and a truck load of books, DVDs and CDs. Not to mention your high priced yoga classes at various exclusive studios.

If you don’t have the right stuff you’re not a real yogi. And then you feel like you won’t fit in, which takes us back to Myth #2.

Reality: It’s not about the stuff

Studies have shown, again and again, that beyond a certain point (enough to provide for the necessities of food, shelter, education etc.) happiness levels don’t increase with rising incomes.

Equally I would argue that the depth and enjoyment of one’s yoga practice doesn’t increase with every new yoga related purchase. Beyond the basics (a yoga mat, comfortable clothes and some floor space) there isn’t much that we absolutely have to have in order to be real yogis.

The stuff, if anything, can be a distraction to the real focus of our practice. So forget the sparkly Lululemon hot pants and get on your mat anyway.

From the outside looking in, those people who don’t yet practice Yoga often share these common beliefs.

They’re afraid they’re not not enough, that they won’t fit in, that they don’t have enough time or the right stuff to practice yoga. Those of us within the Yoga world need to remember this and be mindful of these myths as we promote our yoga offerings.