You are here: Home / Yoga Articles / Deepening • The Yoga of Life / Yoga & Body Image / All the Curvy Ladies do Practice Yoga

When I first started practicing yoga, I never, ever, ever saw another bigger-bodied person like me.

Most days, I thought I was the only one. But I secretly dreamed of finding others — people who also longed for a yoga practice where no one said

Lay your belly on your thighs

Because, hello, if I move a centimeter, I’m already there.

Wave your hands in the air

Now, I know I’m mixing song references here, but I hope you’ll forgive me. Because the truth is that I did kind of want a roll call. Feeling less alone has an amazing way of improving how you feel about something, especially when that something is yoga — and particularly your own body.

Here’s the thing: yoga class wasn’t the only place I didn’t see size diversity. I also very rarely saw any diversity in media representations of yoga either (because I don’t count a size 6 as plus-sized), even ones that were supposedly more “yogic.”

Yes, there might be a token size 10 on a rare occasion, but that was it. Us curvy ladies were being represented as an anomaly, not a norm, and based on how you always hear that women in the US are a size 14 on average, I knew something had to give.

So it was with that in mind that I set out to create what I’d always wanted to find: a place to talk about and share strategies for yoga for curvy bodies.

And when I did, here’s what I found: the representation issue?

It was even bigger than I’d realized (pun totally intended).

When I looked for yoga images to accompany my blog posts, there weren’t any that didn’t feature teeny tiny folks in spandex short-shorts. I couldn’t even find one of, say, just hands folded in Namaste where the arms weren’t bone thin.

With nothing else to draw on, I started having my hubby take some photos of me doing poses to accompany the blog posts. And wow — the reaction was amazing!

It turned out that curvy folks wanted to see yoga on curvy bodies. This is not only practical (how do you actually move your belly there?) but also political (hell yeah, we do yoga!).

This conversation grew into a solidarity action a few years ago when I invited curvy yogis to share their images in a gallery called Curvy Yogis, Represent. The idea is that if we’re not represented elsewhere, we’ll represent ourselves.

Visibility is important. Without it, there’s an erasure of identity and experience — as though the people who aren’t represented don’t exist or don’t matter.

But the good news is that, particularly with the connection available online today, we don’t have to wait for someone else to share our story and image. We can do it ourselves.

And that’s what many amazing students and teachers are doing today, and it’s what I’m so proud to be part of.

While I sometimes hear from people who think that projects like Curvy Yogis, Represent “promote” bad health, research shows us that the opposite is true.

Researchers like Dr. Linda Bacon of the Health at Every Size movement show us that the only things that benefit health are those that we engage in from a place of compassion. Adherence to external rules (like diets) will only “work” when they’re not in contrast to what our intuition and body are asking for.

Fortunately for us, yoga is an amazing, concrete tool for listening to our bodies and approaching our health from a sane, sustainable perspective.

The vast majority of people who connect with Curvy Yoga, though, say that they feel the same thing I wanted to all those years ago: less alone.

And the less alone we are, the more hell we can raise and change we can create.

Here’s to continuing to come together and create the world we want to live in! 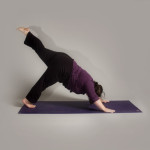 Anna Guest-Jelley is the founder of Curvy Yoga – a training and inspiration portal for full-figured yogis and their whole-hearted teachers.

As a writer, teacher and lifelong champion of women’s empowerment and body acceptance, Anna encourages women of every size, age and ability to grab life by the curves. And never let go.

Grab Anna’s free Quick Start Guide to get your yoga on today! And sign-up for her newsletter to keep up to date with all things curvy and yoga. Check out Curvy Yoga for details.