You are here: Home / Yoga Articles / Teaching • The Business of Yoga / Teacher Interviews / Mark Whitwell, promising us love, sex and intimacy in 7 minutes a day 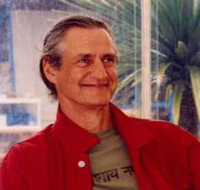 Editor’s Note: Since this article was published, several accounts of sexual harassment and assault have been made public by Mark Whitwell’s female students. We do not in any way condone Mark’s behaviour. You can read more about the accounts here.

He’s arguably New Zealand’s most famous born and bred yoga teacher, yet he doesn’t have the profile down under that you might expect.

That could be set to change with the release of his second book, The Promise of Love, Sex and Intimacy.

Endorsed by heavy-hitters like Deepak Chopra, and Ram Dass, The Promise also comes with a phone app, designed to help people do their daily seven minute practice. Mark maintains that seven minutes practice is enough to make lasting change in a person’s life, and it becomes so pleasurable that there is a natural extension of the practice into 10, 15, 20, 40 minutes or more.

Published by the same powerhouse folk who brought you The Secret, The Promise is Mark Whitwell’s attempt to woo the mainstream masses with a digestible daily sadhana he hopes will change the world.

It’s a bold claim, and exactly the kind of thing we here at Yoga Lunchbox love, so we tracked down Mark and persuaded him to talk to us.

Our conversation covers everything from studying with Krishnamacharya, the teacher of teachers, how the word ‘yoga’ has become meaningless, and when real yoga teaching actually starts. He talks about the lack of real education in 1970s New Zealand, and how that, plus music like The Beatles, sent him to India.

Mark Whitwell, yoga teacher and author of Yoga of Heart, and The Promise.

Other topics of conversation include:

– Is yoga a commercial activity?
– Why yoga is not “an irksome spiritual duty,” that you have to get done
– How just seven minutes of yoga a day can change your life
– The breath
– Why intimacy has been taken away from us by religious idealism
– Religion, yoga, and sex
– Mark’s latest book, and his hopes for it’s impact
– The concept of non-duality
– The best sentence in the book
– Obsession
– When Mark will next be in New Zealand