Anna Guest–Jelley, founder of Curvy Yoga and the co-editor of Yoga and Body Image: 25 Personal Stories About Beauty, Bravery + Loving Your Body, and I both struggled with a distorted body image, our perception of ourselves, from early childhood on.

In the process, we tried countless diets and experimented with a variety of fitness trends – all of which left us feeling shame, guilt and punishment for the bodies we lived in.

Our attempt to emulate the beauty myth was ultimately a pursuit of cultural recognition and a sense of worth. Sadly, our preoccupation with making our bodies conform and submit to our desires is not unusual.

According to the National Eating Disorders Association, negative body image and rates of eating disorders are rapidly increasing among girls and women across race.

But this is not just limited by gender. Body image concerns, eating disorders and rates of muscle dysmorphia are impacting more boys and men. The emotional, psychological and physical fall-out of body dissatisfaction is severe (and potentially deadly).

Not only did Anna and I share similarities in our relationships with our bodies, we shared a similar tale of transformation or radical shift in our body image.

While the circumstances that led us to our first yoga class varied, we both found a consistent yoga practice to be a vital tool in re-establishing a relationship to our bodies.

Yoga practice proved to be the first experience in movement that felt pleasurable, nourishing and that facilitated awareness through meditation – both seated and in motion.

Through our practice we were able to re-connect and relate to our bodies in new ways – punctuated with gentleness, humility, forgiveness and love.

While yoga alone didn’t provide an overnight remedy by any means, a consistent yoga practice did indeed help facilitate a radical paradigm shift that allowed us to cultivate self-love and gratitude. Trust me, this was nothing short of a liberating experience for us.

We begin to publicly share these stories in 2010 with posts such as Feminism, Body Image and Yoga and Welcoming the Curvy Yogini. As we began to write about our yoga and body image experiences, we met more and more people with similar stories – inspiring tales of radical transformation that included the development of acceptance, compassion and positive body image.

While the details were unique, the through-line was the same – yoga practice had the ability to cut through body disassociation, low self-esteem, depression and dangerous physical practices in the pursuit of social acceptance to reveal the heart of the matter – our authentic nature and the source of true beauty.

This became the catalyst for Anna Guest – Jelley and I to curate and co-edit the anthology, Yoga and Body Image: 25 Personal Stories About Beauty, Bravery + Loving Your Body (Llewellyn, 2014).

We found it necessary to simultaneously critically examine that lack of diversity and the role of corporate media in shaping perceptions of what a “yogi” looks like.

It was in the spirit of pushing back against these “yoga body” stereotypes that the Yoga and Body Image Coalition was born as the action arm of the themes presented in the anthology.

My coalition co-founder, Brigitte Kouba (a.k.a Gigi Yogini) and I created the alliance to unite individual efforts in promoting inclusivity, active transformation, and physical, spiritual, and mental empowerment in the yoga community.

Because Gigi, Anna and I know from experience the healing potential of a yoga practice and we want to provide accessibility as well as welcoming spaces that are safe and inclusive physically and virtually to yogis (and potential yogis) of every size, age, sexual orientation, gender identity, socioeconomic status, race and ethnicity as well as ability.

Both the contributors to the anthology and the members of the coalition are yoga teachers, practitioners, experts, educators, activist, writers, businesses, artists, non-profit organizations, and advocates committed to sharing yoga in all it’s forms by developing, promoting, and supporting yoga that is accessible, body positive, and reflects the full range of human diversity.

Because yoga is not just a fitness trend and every body is a yoga body. 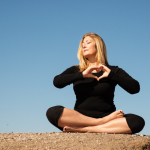 M.A., is a writer, speaker and Professor of Sociology and Women’s Studies. She is a contributing author in 21st Century Yoga: Culture, Politics and Practice and is featured in Conversations with Modern Yogis.