You are here: Home / Yoga Articles / Deepening • The Yoga of Life / Yoga & Body Image / Where Are All the Fat Chicks in Yoga Media? 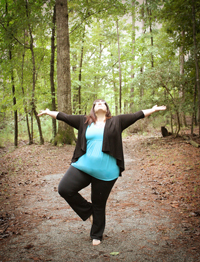 Am I allowed to use the word fat?

How about the word chick?

Or would you prefer I lead with something along the lines of:

Why are most yoga images of young, slender white women?

Also appropriate. But I like the first headline. I like the way it sounds and the way I say it. How you read it and what judgement you place on it is up to you. I pass no judgement on fat. Or on chicks.

This is a valid query – as one of my readers pointed out this week when I sent out The Monthly Digest asking my subscribers:

Who are you and what do you want?

Cheryl came right back at me:

Where are the rest of the women who need yoga or something to get a positive acceptance of ourselves when, we don’t see it on any yoga magazine cover or article?  Everyone else that is doing yoga already has a body similar to yours.  Do you think those of us who have breasts can dance around and enjoy going to the beach when we can’t even find a two piece bathing suit to fit us?  I’m not fat either. Only 170 pounds, but in bathing suit wear and in yoga body pictures – I’m fat.

How are we suppose to have a positive self image when you don’t see women, with larger normal breasts doing … yoga?

First up – most of the photos on this website come from a couple of yoga photo shoots I did a few years back with my friends. The photos reflect them – and me – as I am.

However, I would love to get more variety of yoga shapes and sizes and sexes and colours on this website.

All that stops me is resources.

Wait – I have resources! I have you – the audience. So if you send me your high quality yoga photos, I’ll tag & credit them with your name and website and add them to The Yoga Lunchbox’s stock photo library. I can’t guarantee they’ll get used – but, if they’re suitable for an up-coming article, that library is my go-to-place for images.

Second – I’m going to find yoga teachers who aren’t a standard size 10 (that’s how we size it in New Zealand – I think it’s about a 4 in the USA) to write guest articles. Not necessarily about body image and yoga, but just to show more variety. If that’s you – pitch me an article. I want to hear.

Third – I will bring more awareness to this issue. Body image is a huge thing for 90% of women and the most popular articles on The Yoga Lunchbox have to do with body image. It’s not that people want to be stick thin, it’s that they want to feel GOOD in their body, as it is. Two different things. Often they’re linked together. We think we have to be stick thin TO feel good in our body. It ain’t necessarily true.

So how do we cultivate that ‘feeling good on the inside’ sense of being?

Practicing yoga helps, immensely. So, strangely enough, does growing older. Even though we may not have as great a body as we did when we were younger, some of the pressure drops away and we feel much better in that body.

But there’s more to it than that, and I’ll be on the look out for people that want to write about this topic and I’ll be writing about it too.

Fourth, I’ll point you in the direction of more resources that show all kinds of people doing yoga, or address the specific issues that can come up when you practice yoga if you’re larger, or have larger breasts. Even postures like low lunge can be tricky for someone with boobs and a belly – where do those things go in the pose?

As yoga teachers, the onus is on us to at least have a rudimentary understanding of the challenges of practicing in a larger body so we can at least make our bigger students feel comfortable in class.

Fifthly, here’s my take on why yoga images are so homogenous.

It’s a combination of factors, which all work together to create what we see right now. In summary:

Most of these factors inhibiting the use of a diversity of yoga images come down to unconscious beliefs and ideas that dominate the media landscape.

It takes some conscious questioning and inquiry to first identify the beliefs leading to photo choice. Second, if it’s determined that a wider diversity of images would be appropriate, then it takes more effort and maybe more money to source those images. Finally, there’s the fear that people won’t like it.

I’m going to leave you with a short video from Anna Guest-Jelley of Curvy Yoga.