You are here: Home / Yoga Articles / Teaching • The Business of Yoga / Teaching Insights / The Ethics of Teaching Newly Learned Material in Your Yoga Class 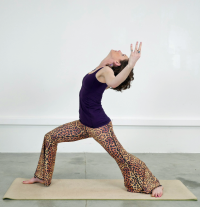 Where did that variation come from & how long have you been practicing it for?

Once, I taught a weekend workshop to an eager group of students, including the studio owner and some teachers from the studio.

My style of yoga and teaching was fairly different to the usual style on offer at this particular studio. My offering was lapped up and everyone enjoyed the workshop, excited to have a new way to approach yoga.

So far so good right? This is exactly the kind of response one wants from teaching a workshop.

A day or two after the weekend, one of the students casually remarked to me:

“Your sequences have already made it into our classes.”

I paused. Already? But the teacher using those sequences would have had no time at all to experiment and play with them in their own practice. They wouldn’t have had time integrate the sequences into their body, or truly learn them from the inside out.

Pondering this, I wondered if I needed to issue guidelines when I taught a workshop requesting that teachers who wanted to teach the material I was offering committed to experimenting and playing with it in their own practice for at least a month before teaching it.

And then I remembered.

I had recently done a workshop with Tara Judelle who had a somewhat similar style to me, but taught in a totally different way. I’d been so excited and enamoured of her method that the very next week I had eagerly used her methodology in class with my students – before I’d properly integrated and worked with her method in my home yoga practice.

I was guilty of the very same thing I was concerned about experiencing.

Now there’s two points that are raised in this, but I am only going to consider the first point in this article.

1. What are the ethics of teaching new material to students?

2. Anytime we notice somebody acting in a way we think is ‘wrong’, or out of integrity, it’s wise to automatically self-reflect on when we might have done the same thing.

So the ethics of teaching newly learned material in your yoga class.

True yoga teaching only ever arises out of direct experience – that is, out of one’s own regular, committed home yoga practice.

A teacher does their own practice, notices, learns and becomes aware of certain things, and then shares those noticing, learnings and awareness with their students.

However, in our modern yoga world many yoga teachers don’t operate like this at all. Many yoga teachers don’t have a consistent, committed home yoga practice. They teach based on what they’ve intellectually learned from others, or based on what they’re picking up in class. If we were to equate this with selling a piece of art work, it’s the difference between being a gallery owner and being an artist.

From this paradigm, it’s logical to attend a workshop or seminar, pick up a few new tricks and then teach them to your students on Monday. You’re passing on intellectual knowledge, or a print you’ve just bought.

However, a true yoga teacher operates from the level of being, where the teaching of the postures is a tool and not the actual teaching.

It’s like an artist learning a technique from another artist. You practice and use and play with that technique until it becomes yours and then you create a new piece of art with it. If you were to learn the technique and immediately whip up a painting using it, it would likely be a poor facsimile of the original artist.

Why does this matter?

I didn’t continue to practice that teacher’s methodology in my home practice and reverted to doing my practice in my own style. Within a few weeks I’d forgotten about and dropped all references to her methodology in my classes too. That tool had just been a blip for my students, something I’d irreverently thrown out – here, try this! – and then forgotten all about.

Plus, when you don’t integrate a new method into your own practice and body, you don’t learn it from the inside out. You only know it from the outside in – and that means it’s the only way you can teach it. This does your yoga students a disservice because you’re stumbling and fumbling about. You don’t know the method inside out, you don’t understand all the nuances, you haven’t figured out what the pitfalls of the method are – so how can you communicate them to students?

Now, I see that after doing that workshop, it would have been wise for me to take the methodology and commit to doing a Forty Day practice with it.

That way, I would have integrated it into my body and practice, I would have learned it from the inside out, and then it would’ve organically become part of the way I teach – or not. Because I might have decided after those forty days that it didn’t work with my teaching methodology. Or it would have become another tool I could use.

This is honouring the yoga and the practice – it’s taking seriously what we’re doing as yoga teachers – and yoga students.

Adopting this way of working reveals how committed we are to what we do,and how much we care about the quality of our teaching.

But the results are so much deeper and stronger and more real.

And isn’t that what we’re looking for as students and as teachers?