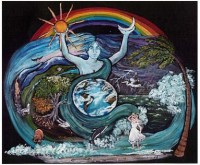 All cultures of the ancient world worshipped the principles of the Mother, Shakti or Devi.

Although it may have been called by different names, the concept of a force which bestows life, nourishes, loves, comforts, supports and transforms has always been present.

In Christianity, we know her as Mother Mary.

In Japan, she was Amaterasu, the sun-goddess; in Greece, she is Demeter, the corn-goddess, Aphrodite, the goddess of passion and Gaia, the Earth Mother.

Buddhists call her Tara and the Chinese call her Quan-Yin, both representing compassion, love and self-truth.

In Egypt she is Isis, the river-goddess. She shows acceptance and patience yet strength. She spins the web of life and kneads the earth with life-giving sap. She also brings death and the chance for rebirth.

The Goddess in all her aspects is called the Universal Mother. It is the life energy that sustains the whole universe that creates matter and has created us.

If we are without Shakti, or the energy force, the body cannot move and the mind does not operate. She is our breath of life.

However, in our recent past, this feminine form and the associated spiritual powers have been repressed and we have lost touch with our own breath. Witches were burned at the stake; women prevented from taking sannyas or following spiritual ideals, pagan earth rituals outlawed and a materialist and patriarchal society that leaves little time to explore and know the subtle aspects of ourselves.

The once powerful traditions that honored the sacred feminine, the life force itself and the Mother Earth have been overpowered by a male dominated worldview.

This denial of our essential nature and that which is inherent in all of creation, has led to the current imbalance that is being felt on the earth we inhabit and it increases the sense of separation we feel from nature and our own selves.

In the last fifty years, the tides have again begun to change and women have been reemerging and reclaiming their spiritual inheritance.

In India, great yogis like Ramakrishna Paramahamsa worshipped his wife Sarada Devi as a form of the Cosmic Mother, and Swami Sivananda began to initiate women into Sannyas.

Swami Satyananda, carried this further, placing women in all the important roles of his mission, initiating hundreds of women into Sannyas despite societal resistance and uplifting the downtrodden girls of remote Indian villages with education and Shakti workship.

Buddhist nuns have gradually been rising in prominence and other traditions as well have joined this new renaissance supporting women to rise up and again lead a spiritual revolution of honouring the life force as expressed in different forms of Shakti. This is necessary for the emergence of a new society, which is more balanced and includes the best of both men and women.

There are many tools in yoga and tantra that help one to rediscover the sacred within; qualities that already exist in each and every woman and man.

The depictions of different Goddesses represent parts of our internal nature. The more we know ourselves through self reflection, yoga, meditation and ritual; the more aspects such as abundance, strength and wisdom will shine in our lives.

Some tools to connect with these subtle aspects are the mantras and images of particular forms. Sound vibration has an effect on the physical and mental body, allowing for blocks to release and prana to flow.

Ritual such as fire ceremony give an opportunity to connect with the elements which are symbolized by the offering of incense (Air), water (water), grain (Earth), candles (Fire) etc. and concentration on the different Goddess representations allow for an inwards discovery of how those qualities that are represented are unfolding or blocked within our own life. For example:

The Goddess images and the associated mantras can be used as inspiration to overcome difficulties that arise in the path and to inspire learning and wisdom.

The aim of ritual is to allow access to certain states of consciousness. Ritual activity helps one to maintain conscious awareness of the laws of nature and find one’s place in the cosmic scheme. It expands and intensifies participation in the activities of the universe and provides a way in which we bypass the analytical mind and connect directly with consciousness via the heart.

Some people confuse this with a religious practice and think that the purpose is to pray to a higher power. If that suits a person’s nature, then by all means do, however, for many it is easier to relate to the rituals as a way to focus the mind and draw up to the surface qualities represented by different expressions of the Goddess.

The mind is vast. It is described like a huge ocean and to see the other shore is impossible. In order to cross the ocean, a person needs navigational equipment, a boat and a guide. Utilising a form to focus the mind is like the boat that helps one to cross this vast ocean.

GAIA (Mother of all)

Gaia from Greek mythology was considered the great mother of all. For me the teaching is to extend my sense of Mother beyond just my own daughter and begin to include equally, those that live in the retreat centre, my friends’ children, anyone in need and gradually feel the sense of care, love and nourishment I would give to my daughter for all who I come in contact with even for strangers.

GAYATRI (Mother of the Vedas)

Gayatri is the female counterpart of the sun and the mantra for prana. The literal meaning of Gayatri is “that which frees the senses.” She is considered the Mother of the Vedas, which expound ancient wisdom.

“Gayatri mantra is like the rising sun on the horizon of the human consciousness, illuminating not only the external world, but also the inner world. Our inner world has many beautiful things, but we do not know them, we cannot see them….Gayatri mantra flashes light on the different realms of our consciousness.”

Gayatri reminds me to take care of my vital energy and to use the light to gradually increase clarity, intuitive knowledge and wisdom.

The energy of Durga relates to removing difficulties from the path. She is depicted holding different weapons, which are symbolic of cutting away the challenges. She represents the latent and usually unconscious power in all of us. If we can invoke this power, then we can align with our own higher being. This is the big, strong, luminous part of us, which is the antidote to our self-created darkness. The energy of Durga inspires me to develop inner strength and the ability to face whatever situation arises.

Lakshmi is the energy of prosperity, auspiciousness and wealth at all levels; mental, physical, emotional and material. She represents the beautiful and bountiful aspect of our nature and inspires the energy of fortune, power, pleasure and prosperity. In order to continue to experience this abundance, one should share their wealth. The more we give whether knowledge, care, physical support, food or money, the more enriched we become. Swami Sivananda’s teaching of “serve, love, give” is the teaching of Lakshmi.

Saraswati is the goddess of wisdom, learning and speech. She is the symbol of intuitive intellect, which is born of the cosmic intellect. Saraswati brings art, music, dance, literature and culture into our lives. The vehicle of Saraswati is the swan because the swan has the discernment, which gives one the ability to establish what is right from wrong. Saraswati teaches us to connect to our innate wisdom and creativity and to develop viveka or discrimination.

Tara is often called the “mother of liberation” or the “Goddess of Compassion”.

She is depicted in Buddhism as well as Hinduism and also can be traced to the Druids, ancient Finnish and South American legends. In Buddhism there are 21 forms of Tara, which can be understood as different qualities such as enlightened activity, compassion, wealth, prosperity and power.

A Buddhist monk who gave me a Thanka painting of a Green Tara when I was trekking through the Himalayas 20 years ago was the first to expose me to her. At the time, he told me she was the Goddess of compassion.

I received my name Karuna also meaning compassion, shortly afterwards in yoga initiation, which has become my life path. Therefore, for me Tara represents that aspect of caring for others, stepping into the shoes of another, feeling where they are at and acting from their point of view so that I can be of the greatest service.

Swami Karma Karuna has received yoga training in Nepal, India and Australia. She spends 3 months each year living and teaching in India at the home and sadhana place of Swami Satyananda.For more information on these guided yoga retreats to India and the World Yoga Convention in Bihar click here.