You are here: Home / Yoga Articles / Awakening • Creating a More Beautiful World / The Process of Waking Up / Jason Corliss: Love Fully, Live the Moment, Believe in the Magic 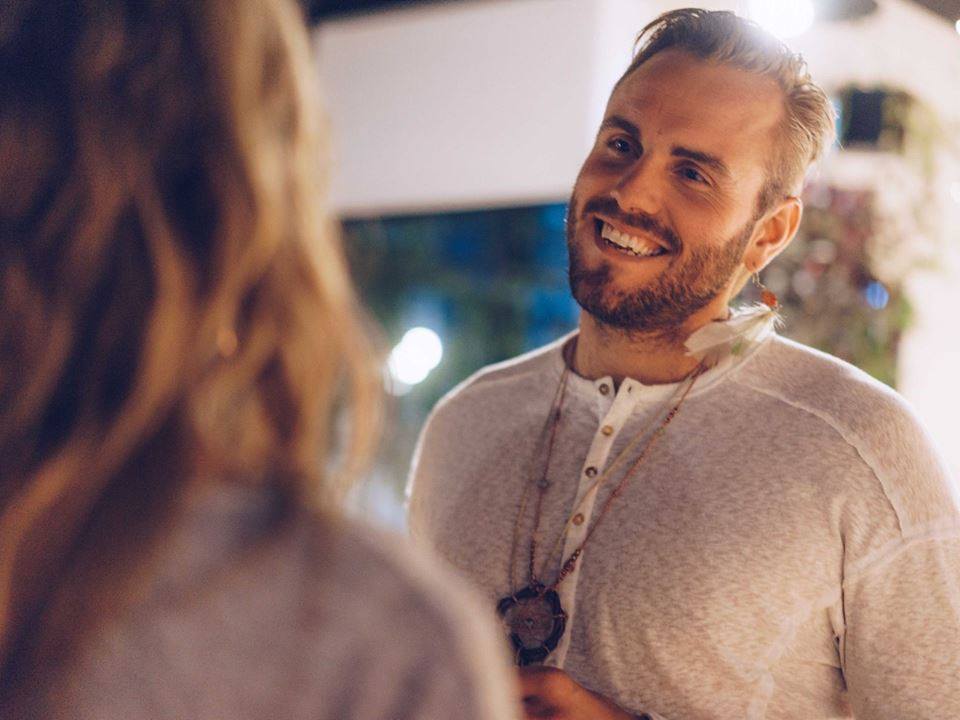 Jase, shining love into the world.

He was outside, dancing, in the rain.

This weekend – the weekend of his funeral, was the International Yoga Festival at Kawai Purapura, and I was presenting. Grace meant I was scheduled only for Friday and Sunday, so I was able to go and sit with Jase at the funeral home on Saturday morning before heading to the chapel for his memorial service.

And after, back at KP, I sat on the rocks not ten metres from that space where I last saw Jase, and I sobbed, again.

They’d been there, at the funeral, crammed into the chapel, lining the walls, and sitting cross-legged in the aisles. Together, led by Franko Heke and Nick Corliss, we’d opened the service the way our Tribe likes to open and close most everything – with OMs that threatened to lift the roof off. The sound rippled out and upward into the walls and beyond and I felt the power of all that Jase brought, and all that he stood for, and all that he had left behind – his legacy.

Later, after Nick had shared the story of raising the roof in the True North Cafe at Wanderlust Great Lake Taupo in 2017 with Spirit Bird, we raised the roof again. As the music played, the Tribe stood and wrapped themselves around Jase’s coffin, singing and dancing and crying and hugging the words of Xavier Rudd’s epic song. 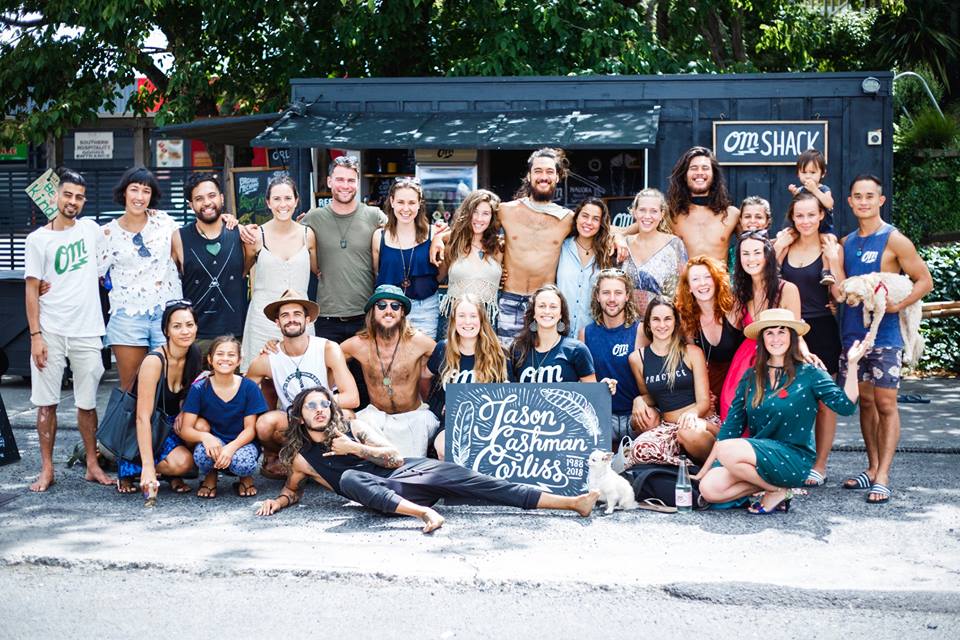 The Tribe, gathered outside the OM Shack at the Parnell Markets, the day after Jase’s memorial service. Photo: Tamara Josephine

Jase’s message was simple – love fully, live the moment, and believe in the magic.

That night, sitting on the rocks, I was living the moment, and the moment for me was loss and grief and disconnection. I craved my Tribe – the people who I don’t have to use words to communicate with. Those who knew Jase, and know this path.

Later, the tears slowed, and I stood at the back of the main stage, watching the people dance to disco-style Kirtan. I stood in stillness, feeling my feet on Papatūānuku, and breathing in the night air of Ranginui. I stood where I’d stood with Jason two weeks ago. I stood, and I felt, and I watched.

Emma Skellern, a Tribe member, walked out of the crowd and asked;

Tears streamed down my face again. She stepped in and held me and I cried into her shoulder.

And I did. As we all did that weekend – those of us presenting and attending the Festival, whilst mourning Jase and attending his funeral.

Emma stepped back, and gazed into my eyes. Stillness, reflected back at me, holding me in the space, with no thought, no expectation, no ideas. Just beingness.

This is what Jase did for me too – he held me, unconditionally, in love. He did that for all of us – loving us, as we were, and reflecting that love back to us. 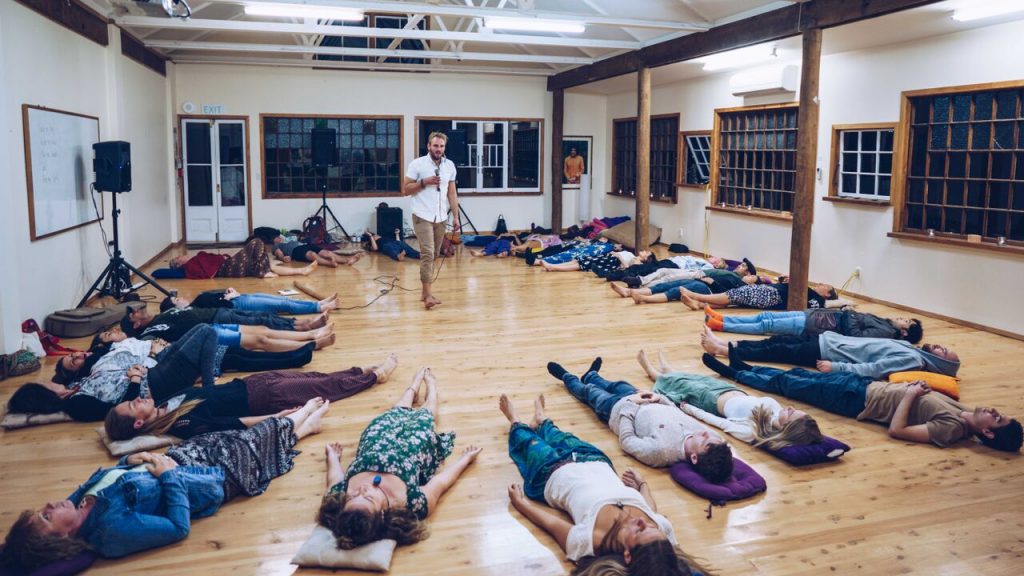 Jason Carliss, may his legacy live on.

Later, Nik Robson arrived, and we went and sat on the rocks together for a moment to say a prayer for Jase and set an intention before going back into Main Stage for Franko’s Kirtan – a tribute for Jase.

Nik and I stood, and he hugged me.

“You know I’ll always be there for you.”

Nik and I strode toward the stage, slid down the side and paused to find the spot where we needed to be. This was the moment, and we were called.

And as we sat, the rest of the Tribe began to filter in and the room began to fill with those who knew Jase and were touched by Jase. With every Tribe member that arrived, I felt more connected, more safe, more seen, and more known.

Meanwhile, Franko – despite his exhaustion and his tired voice – was deep in the flow of one of the most inspiring Kirtan’s I’ve seen him lead.

Nik and I sat cross-legged and dropped in, deep. I could feel Nik’s presence anchoring me – his strong Shiva energy providing a radiant pole of light from earth to sky. He’s been doing some serious practice in the last few years and it shows.

The chant began to take me, and whilst I was grounded through my legs, sitting in half-lotus, my arms and torso began to move. Kundalini. She wanted to come through me. And I dared to allow her, even though I was in public, even though everyone else was sitting still, even though she can move me in some pretty freaky ways.

I dared to allow her because I knew what Jase would do. When spirit moved him, he moved with Spirit. There was never any doubt, never any holding back, never any second-guessing. That was Jase, living each moment to the fullest, living Spirit to the fullest.

The music cranked up. Nik spied a drum on the side of the stage, and sidled over to grab it for Aimee. She grinned, threw a leg over the drum, pulled herself up strong and tall, and began to beat it out. Franko caught the drum and his chant intensified. Aimee picked up the beat. On and on it went and I couldn’t sit anymore. The dancer in me needed to move. Kundalini needed to move.

But what will people think? Nobody else is dancing! People will think I’m crazy.

I had no choice – I couldn’t let fear dictate my actions. That would dishonour Jase, and all he stood for.

So I stood up, moved to the side of the tent, and slid my water bottle and phone under a chair. And then I began to dance it out, letting the chant and the drum and the music and Kundalini take me. Waves of ecstasy rolled up my body as my legs and hips and torso and arms were taken by the energy.

The chant ended, and I dropped to one knee to steady myself and ground while drinking some water. And then I moved back to my position to sit and chant again.

This time, eyes closed, feeling the music, still moving… everything dissolved into energy. My perception had expanded out so far that all matter was left behind and only energy remained. This was it. Direct realisation of something I’d only ever intuitively known as truth before. Something Jase and I both knew, and I knew he’d experienced.

More gratitude, for the man and all he bought. For him inspiring me in that moment to live fully and let spirit move me. Jase had brought me to this moment, of dissolving completely into energy. And then it hit me too…

That Sunday of the Cacao Ceremony, Jase had been dancing at the back of the tent. Well, not really dancing, but standing, swaying, in trance, his eyes rolling back slightly as the energy moved through him. I’d watched him for awhile – concerned, because I wasn’t sure how grounded he was at that time.

I’d moved to stand behind him, and began to work energetically with him, connecting as deep as I could to the earth so I could help to anchor him.

I’d thought that I was helped him, caring for him. But during Franko’s kirtan, when I allowed Kundalini to take me further than I’ve ever gone before in public, all the way into the pure energy realms… I realised that really, Jase had been helping me. Grounding Jase in that same spot less than two weeks ago had also deeply grounded me. And that grounding was what had allowed me to soar so high and so far.

Jase soared like that – high and far and wide. He was a being of light – as we all are – and he travelled further than many of us dare.

And that’s why he ended up going all the way to psychosis a couple of times. He could travel, but he didn’t always know how to ground and contain that energy states that he reached, nor how to create context for some of his experiences.

But that’s also why he was able to bring back so much love and so much wisdom for us all. It’s why he was able to found the movement that Organic Mechanic has become, and be a founding member of the Tribe that has grown up around OM.

We all recognised it in Jase – his purity, and his passion, and his love and his wisdom. But he was only ever reflecting back to us that which we also hold. We too are that pure, and that passionate and that loving and wise.

I felt Jase’s essence inside me at the Kirtan when I was dancing. I felt him become me and me become him. I knew he was there, with us all, calling us forth, calling us up.

JC, you were the One, as we all are the ONE.

Rest in ecstasy brother, and watch… watch… as we make magic in your name.

“The centre, where my two worlds meet.
The spirit and the soul infinite in peace.

I am an eagle, I am a hawk, I am the ancient trees.
In a dance with creation, the drum beats in my chest.

We are one.
One people, one tribe, nature.

Nature being Nature.
So be as you are, love all that you are.

You have come to dance, to sing, to celebrate all of creation.
Be at one with yourself, return to the centre.

The dance of our ancestors,
The light now handed to you.”