You are here: Home / Yoga Articles / Teaching • The Business of Yoga / Teaching Insights / Can Yoga Teacher Scandals and Transgressions be an Opportunity for Growth? 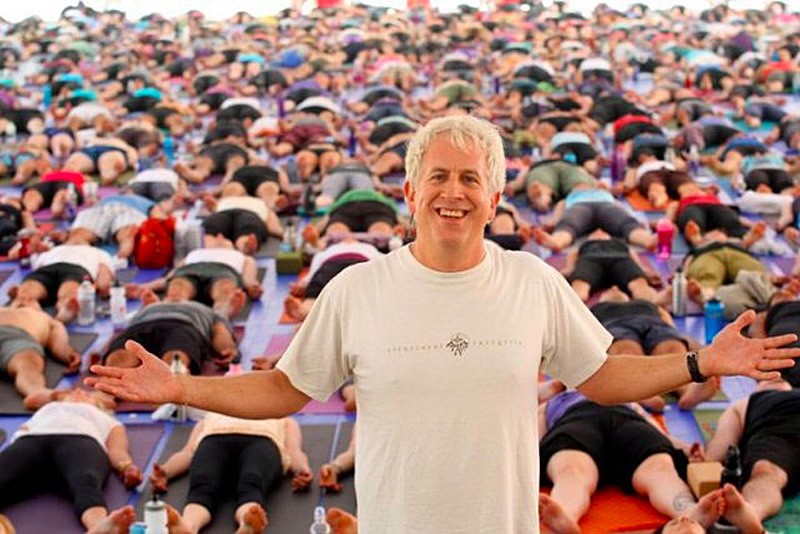 John Friend is just one example of a yoga teacher who has fallen from grace – what can we learn from his story, and the many others like it?

The guru model is dead in modern Western Yoga. And the list of scandals involving gurus, or teachers, or swamis just seems to be growing longer.

Where the hell are all the enlightened and perfect teachers?

They don’t exist. Our teachers – known and unknown, big and small, experienced and fresh, revered and loved, skilled and talented, wise and powerful – they are also human.

Which means that our teachers, like us, have unconscious shit that can get in the way of their teachings. And can impact students.

Yet it feels to me like we’re still collectively holding on to this idea of the Teacher as Perfect, and projecting that onto those we choose to study with. Often, that projection, those ideas, and those expectations are completely unconscious, meaning we don’t take responsibility for discernment and boundaries on our side because we’re giving away our power to this idea of the Teacher.

Until the teacher fucks up.

And then we get all upset.

Because they weren’t perfect. And they’ve done some things that don’t jive with our ideas of how a yoga teacher should behave.

I say it’s time to change the paradigm.

So let’s start there shall we?

Let’s all collectively acknowledge the humanity of our teachers, and the reality of the unconscious shit that they too are still working through.

Or not working through. Because sometimes our teachers, when they fall from grace, are too entwined in their own unconsciousness to actively work through with what’s going on.

Like Bikram, who has behaved horrendously, and hurt and abused multiple people. There’s no indication that he’s working with his patterns and his behaviour in a productive way.

Or the teacher that is unconscious of his own bullying patterns and gets stuck on insisting that all we have to do is get out of victim consciousness, because he reckons that’s the real issue.

This shows that when the shit goes down – or before it goes down – we can’t rely on our teachers to step up and do the work and LEAD the way you might expect a teacher to… there’s those damn expectations again!

It shows that it’s up to us – to name and own our own shit. To do our work. To grow from every scandal and every fall from grace, even when we’re not directly involved and impacted.

If we are directly involved, there’s even more opportunity to examine how our unconscious patterns may have fed into the dynamic experienced. To own the parts of our shadow that got entangled. To do the work we need to do, while still holding the teacher accountable for their side of the drama.

And most importantly, to acknowledge how we might have projected our desires to engage with a perfect human being on to our teacher.

This is important! Because when we can SEE teachers as they are, rather than projecting our ideals and desires on to them, we are less likely to get caught in THEIR unconscious shit.

And we are more able to hold our centre and say, ‘No, fuck off, you’re talking bullshit.’ Or ‘No, that’s crossing my boundaries and I don’t like it.’ ‘Or no, you’re a bully and it’s not all about victim consciousness.’

Then, by owning our projections, it’s possible that we can see the unconscious aspects of our teacher – maybe they’re deeply controlling, or lax with professional boundaries – and we can choose not to engage with that aspect of the teacher but to still imbibe of the teachings and goodness that they offer.

Because every guru and teacher who has ever fallen from grace also offered much goodness into the world.

Anusara was a powerful way to engage with yoga. John Friend did much good in the yoga world. Bikram Yoga has worked miracles for thousands of people around the globe, including me.

Shit happens. And it’s going to keep happening in the yoga world, in all of shades of brown.

Shit happening doesn’t something is wrong! No… it’s because the shit is finally coming into the light.

It’s a call for healing and integration.

So how do we do that? How do we heal and integrate in the wake of the humanness of our teachers?

As teachers, it means being ruthlessly honest and transparent about our own unconsciousness, especially when it spills out and impacts our students.

It means checking in with colleagues and listening to advice about how to deal with potentially inflammatory situations.

It means owning our humanness, our weaknesses, and our blind spots.

It means having the courage to come forth with our own shit, even when we’re afraid and there’s much to lose. Because every time we let fear guide our choices and our actions, we’re giving into the dark side.

We can not be afraid. Not anymore. We must be willing to see and own all of what we are, including our darkness, and unconsciousness and weaknesses.

Because there is always a risk, as a teacher, when we own our shit, that there will be repercussions. Festivals stop booking us. Venues don’t want to work with us. Studios don’t hire us.

As a community, we are also called to examine our own responses to those who fail to be perfect. Do we reject them? Do they trigger our own shit? Do we turn away?

Or can we hold the fullness of our teachers in love, while also holding each other accountable when needed?

Because sometimes it is the community around a teacher that needs to speak up about dodgy behaviour, rather than sweep it under the yoga mat and just get on with practice.

Practice, and all is coming.

Maybe – or maybe this is our practice now – well beyond the mat, and into the way we interact as human beings, playing out the roles of teacher and student.

For, in the end, we are but two imperfect beings, rubbing up against each other, calling forth each other’s shadow so that we may more fully embody the light.

Let’s do that work, as a community.

Let’s face into the fears and shadows together.

Let’s hold each other accountable, in love.

Let’s lead, each and every one of us.