You are here: Home / Yoga Articles / Teaching • The Business of Yoga / Teaching Insights / Teenage Kicks! The Impact Of Yoga On Teenagers

I was 37 when I started yoga and to be frank, I thought it was all pretty weird!

And so did most people. A lot has changed since then.

There has been a 25% year on year increase in the UK in people involved in yoga, one way or another in the last ten years. So, clearly, perceptions have changed!

When I started thinking about offering yoga in schools, it was fun and easily accepted at primary school, as little kids are so open to new experiences and so are their teachers. But the secondary schools (11-18 years ) sneered and joked that no one would turn up.

Luckily, the primary school kids came to the rescue, contradicting the adult stuck in the muds! I have come to realise over the last ten years that young people are our future, our vibrancy and our life-blood!

As those yoga-loving primary students moved up into secondary school, they demanded more of the fun they had had at primary school and paved the way for TeenYoga. This was my delightful lesson from the time: when we don’t see a way, they see one, when we see difficulties, they see possibilities!

Thanks to several young people and their mums who contacted me over the years, TeenYoga started to become a reality in schools across the rural area where I lived.

I noticed shifts and changes in the kids who practised yoga. They became more and more focussed, calmer and achieved better grades in general. More and more, there seems to be a clear understanding that yoga can help young people with anxiety, depression or low self esteem.

It wasn’t all plain sailing though. In the beginning, I had been asked to go into a school to teach yoga as an obligatory subject to the most unwilling group of excluded boys. I wonder if the school saw it as a punishment? (For me and for them!)

The trauma of witnessing fourteen boys beat each other up with yoga mats, ending in bloody noses and the deputy head storming in and looking at me in disbelief with “Can’t you control your class?” written on his forehead, will forever live with me.

I am not sure I ever really managed to successfully teach a good yoga class to this group! I don’t think any of us who love yoga want to see it dragged through the mud and ridiculed!

Ten years later, it feels wonderful to know that more and more young people are accessing this science of well-being that helps you transition into adulthood so seamlessly, helping with emotional regulation, concentration and most of all, in connecting to your own deep desires and needs.

On a neurobiological level, yoga affects the brain in many ways, but particularly by integrating implicit and explicit memory (read Dan Siegel’s wonderful book, Brainstorm) through conscious breathing and stillness, which results in less dramatic reactions to tricky situations.

Implicit memory is memory that is embedded in our brain but that we don’t consciously remember. However, it affects the way we react and respond to different triggers.

By deep breathing and sitting with discomfort, our implicit memory is shown to be released, digested and integrated, thereby releasing its power over us. (2007 Springer)

You can imagine the impact of this in young people, who have experienced trauma or who have had a rough ride.

Have you noticed how chilled you feel, sometimes for days after your yoga practice? This is because your tiny friend the amygdala, right at the centre of your brain does not have so much power over you any more. (Lazar 2011)

As other parts of the brain start to take over, like the prefrontal cortex, which is in charge of executive functioning (meaning making decisions, especially under pressure), the amygdala has less power.

The amygdala’s role is to make you run, when you are afraid, for example. If yoga, mindfulness and meditation (the main fields of research) are practised regularly, this part of the brain has less impact.

What does this mean?

Basically, it means that extensive and rigorous research proves that mindfulness, meditation and yoga helps you deal with life and its challenges in an effective way.

When introduced at a young age it can provide a long and meaningful life for the student, rather than a life full of suffering.

In a way, sociologically, I see yoga as an anarchic practise, allowing the young person to explore her own needs and desires before succumbing to the requests of society in a numb and unthinking way.

Sometimes it scares me. I think, are we teaching a generation of young people to be so free through their experience of yoga that the very fabric of society will disintegrate and dissolve in favour of an honest, loving and freely organic way of life?

As we learn to relax deeper and deeper into our soul, releasing tension and controlling our mind, dropping into our heart and into stillness, we reject the exterior, the superficial, the lies and the manipulations. We see them for what they are.

Adolescence is a time of honouring truth, differentiating ourselves from others and individuation anyway. With yoga as a tool, the process and the transformation can take only a matter of weeks instead of years as it did for me as an adult.

What surprises me most from my classes with the young people is their constant demand for yoga nidra. Here in the United Kingdom, in the winter it can get dark and damp, so, our seasonal practice is often about long, deep postures and long soothing yoga nidras, where we work on encouraging and increasing confidence, self esteem and sense of union with each other.

As Schopenhauer said, an idea goes through three stages: ridicule, rejection and acceptance. I am happy to say we are now in the third stage, where politicians and educators are requiring yoga as part of the weekly school schedule in order to create a harmonious and beneficial atmosphere for young people to thrive in.

In response to this, in July this year, TeenYoga is hosting a conference in London, called Instill, which has invited speakers from the fields of Neuroscience, Sociology, Yoga Philosophy and Education to speak on the role of yoga in schools in the future.

To me and the two hundred and fifty graduates of the TeenYoga course worldwide, it is obvious that yoga will form part of the curriculum in schools and referral units across the world, to help young people thrive towards optimal all round health 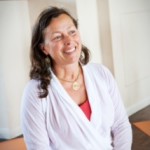 Charlotta Martinus is the founder and director of Teenyoga, an international training course, training yoga and school teachers to work with young people to help them to incorporate mindfulness, yoga and meditation into their lives. Charlotta is a single mother of two teenage boys, who are, of course, her greatest teachers. She teaches between 5 and 10 classes per week to local young people. You can follow TeenYoga through their website, Facebook and Twitter pages, or contact Charlotta by email.