You are here: Home / ARCHIVE / Physical Practices / The Joys of Introducing Yoga to Children 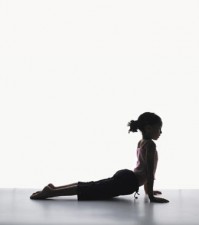 Kids love movement and love exploring the potential of their bodies.  It is so much fun to offer them different options for doing so and watch them delight in the outcome.

It is quite powerful when kids explore and experience the effect of the breath as an extension of body awareness, and begin to use it as a tool to relax or energise themselves.

Start with feeling where the breath comes in – with hands on the belly, upper chest and the back ribs.  Perhaps use an object that expands and contracts in time with breathing – for the visual kids and the wee ones.  And then taking it further; an inhalation to energise, an outward breath to relax.  Yoga becomes an experiential science from the beginning!

“How does feel when you fold forward and focus on breathing out?”

My awareness of this was a useful tool when working with large groups of children, whether I was motivating them or calming down the excitement that thirty nine, ten and eleven year olds can generate.

‘Heads down, thumbs up’  is a class game played by many of us from Aotearoa at schools around the country years ago.

At the time I didn’t know why the teacher loved it, perhaps she didn’t even know why it calmed the class down so much.

The whole class is in Pose of the Child, with little light fists by their ears, thumbs pointing up.  Three ‘taggers’ squeeze a pair of thumbs each.  The whole class then sits up (“Slowly,” I would suggest years later, as a teacher with yoga knowledge. “Breathing in when you come up.”)

Everyone is now very calm and the three selected try to guess their taggers to be ‘in’.  It is such a treat for the teacher and the children combined.

My yoga experience with children started in Melbourne in 2000 where, in addition to adult classes, I got to teach four kids classes a week (three to seven year olds and seven to eleven year olds).

I discovered so many ways of connecting kids with their yoga, like exploring movement through songs and stories, with poses as animals that sometimes move around the yoga room.

One of my favourite discoveries of the time was Magic Yoga Mats – a relaxation and imagination exercise that is a favourite with the wee ones.

While in Savasana with their eyes closed, the kids ‘fly’ out of the room, through the sky for a bit and then down to a magical land of their dreams.  Afterwards, in a circle, they recount where their imaginations have taken them – the places they talk about are incredible.

As I shifted to primary teaching, in retrospect, it has been interesting to notice how my injection of yoga within the classroom evolved.

As a teacher trainee it was all about figuring out how to manage a class of children as we played with Yoga.

I ended up using their experience of the energy generated by doing the fun and tricky poses they liked as the teaching tool, and used it as the rationale for keeping everyone focused.

“Okay, we’ll go out.  As long as we have the commitment to keep it tight and centre ourselves in between different poses.  Deal?”

So outside, on the grass in a circle, we’d all be trying the Bird Pose (hands on the grass, balancing knees on elbows).

Kids love this one; giving it a go, falling out of it laughing, exploring their strength and balance.  Ask one kid to call, “Finish!” and it’s a mexican wave from them to the right, with a wave of crossing legs.

Eventually my use of yoga within a school class consisted of three things.

The first was about about preparing beforehand exercises, with stretches beside desks,  and the second was relaxing after,  each child taking their own personal Savasana after a run or fitness game. They explored how it felt to take time to get their breath back, to let the body absorb the effects of the exercising the body.

The third was a great spontaneous discovery during an important writing session one day.  It was about concentration.

“I sense a flailing focus guys.  You have researched some interest stuff!  You want to produce a quality piece of work, right?  Okay, let’s try something – pens down, pop your hands on the desk and close your eyes.  We’re going to take a breath.  As you inhale, feel it energising your brain, and encourage it to to fire up about the cool information you have found.

That looked like it worked!  How about two more?”

Having classes of kids who were aware of the breath because of little things we did ensured that the effect of any such exercise was very powerful!

Kids eventually would call the need for it at times when they sensed the class could use it.  Breathing to focus the brain was especially popular during old school P.A.T. tests.

I offer these classroom teaching experiences of yoga as I depart from the classroom for the time being and focus on Yoga teaching again – teaching a variety of classes at Hot Yoga of New Zealand – including of course Kids Yoga.

Once again I will get to explore yoga with children in specific classes.  I can’t wait!

If you are into yoga I encourage you to play with it with your children and/or send them along to a class so they can explore it with kids their own age.

It is such an incredible gift to give children as they are learning about their bodies and the world.  The breath and the body have memory.

We are all born strong and flexible, and keeping kids tapped into that is good for their future physical well being.

This coupled with exploration of how good it feels to take time out of their fun active lives and relax for a bit is a great balance.

Giving them them opportunity to experience their creative imaginations while in Savasana is the cherry on the cake.