You are here: Home / Yoga Articles / Starting • The Foundations of Yoga / Practices / Pranayama – It’s Your Medium to the ‘Super Soul’ 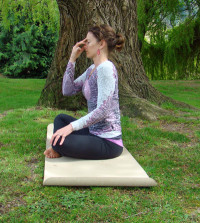 India… the place that heightens the sense of penetration into another worldly reality, or the world beyond this one; a world within a world.

I am currently in Mysore, India taking a pranayama, mudra and philosophy course at the  Krishnamachar Sri Patanjala Yoga Shala with the famous Guruji, B. N. S. Iyengar. (Not to be confused with B. K. S. Iyengar).

This entails taking an hour class with him every day and practicing pranayama six days a week for four weeks.

B.N.S. Iyengar was a student of Krishnamacharya and continued the Ashtanga yoga tradition through the teachings of pranayama, mudra and meditation.

Among Krishnamacharya’s best known students are Sri K. Pattabhi Jois and B.N.S Iyengar.  All of these teachers in Ashtanga yoga are all branches of a single tree; they were all students of the great yogi master Krishnamacharya who was the first teacher who taught the most traditional and original form of Ashtanga yoga in Mysore from 1933 – 1989.

It is of absolute and utmost importance to B.N.S Iyegar to keep the traditional system intact and as pure as possible.

He will not accept students if they are entrapped in their own techniques and cannot “unlearn” incorrect method.

The shala warned me that it is common for students to quit. They also warned me that it may be dangerous, and asked, “Are you sure you want to go through this?” Additionally they began to tell me a story about one student passing out that day during an intense Bastrika technique. I assured her that I could handle it despite my feelings of apprehension.

There are three other students in my class with Guriji: B. N. S. Iyengar. Everyone is at a different stage of the course and he will sometimes ask students to sit at the back of the class while he teaches students individually.

He will get angry if you make a mistake. He does not allow recorders or smart phones to record technique and he will direct you on what to write down in your notebook. Sometimes he will take your notebook spontaneously and flip through it to check what you wrote down is accurate.

Today I learned that pranayama, especially the more intensive dangerous ones, will bring emotions to the surface in an extreme manner.

It was so intense that no matter how hard I tried I could not keep the emotions from bubbling up to the surface and stop myself from shaking from the emotional release. I had been warned prior to the class that students often cried – I didn’t believe that it could happen to me, but I was wrong.

Strong emotions of inadequacy came out which I have not felt since I was 7 years old. For my mother, nothing was ever good enough including me and all of these stored up feelings of vulnerability which I forgot about burst out into the open without my control.

This stuff has to come out anyway…no matter how hard I try to remain strong. I gave in and surrendered to the emotions and all of the mess below these deeply repressed emotions.

My busy life in Taiwan is often on speed dial where I tend to mute emotions by living on auto pilot, and because of this, the pranayama practice with B.N.S. Iyengar has come to seem so utterly personal and emotionally intense.

Pranayama also works to help bring to the fore the fragility of my life. That is, without control of my breath there is no life.

Kanchen, the director of the shala whom I’ve adopted as my yogi mother said to me;

“The true yogi chooses when her last breath will be. True yogis don’t let their body choose their time.”

Today I experienced pranayama as an expression of my duality; both the powerful and the weak facets of my mind and body were revealed to me. I also felt the intimate relationship pranayama has between my breath and emotions.

Today I experienced all of these magnificent things and I am willing to learn more. How does one maneuver the consciousness through the stormy ocean of messy emotions?

I think it starts with objective observation and refraining from resistance, which causes discomfort. I want to let go and to journey further with the practice to see how far it will take me.

I want to discover what is below the surface and to learn how to acknowledge the messy stuff without denial, judgment and attachment so that I may be a clear conduit for what B. N. S. Iyengar refers to as the ‘super soul’. 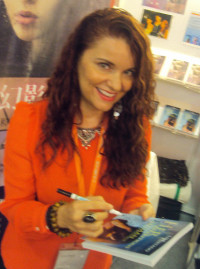 L. Farrah Furtado is Portuguese- Canadian and has been living in Asia since 2002.

Furtado is an award winning author who is also the co-founder of “Kaohsiung Yogi”, a non profit yoga co operative based in Kaohsiung, Taiwan.

You can connect with her via her Facebook page or by email. Purchase Furtado’s book based on a true story here.