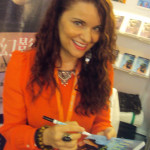 by guest author L. Farrah Furtado India… the place that heightens the sense of penetration into another worldly reality, or the world beyond this one; a world within a world. I am currently in Mysore, India taking a pranayama, mudra and philosophy course at the  Krishnamachar Sri Patanjala Yoga Shala with the famous Guruji, B. N. S. Iyengar. (Not to be confused with B. K. S. Iyengar). This entails taking an hour class with him every day and practicing pranayama six days a week for four … END_OF_DOCUMENT_TOKEN_TO_BE_REPLACED 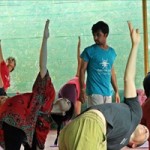 The team from Samyak Yoga interviewed by Kara-Leah Grant. Tell me about Samyak Yoga. When was it established? What inspired it’s creation? Rakesh: Three young teenagers trained in Yoga, Veda, Vedanta and Sanskrit for six long years under the guidance of many scholars,  such as Dr. Ramachandra Bhat Kotemane, from an ancient system of educational institution named Veda Vijnana Gurukulam located in Bangalore and graduated from Svyasa Yoga University found that their goals, aspirations and efforts … END_OF_DOCUMENT_TOKEN_TO_BE_REPLACED