You are here: Home / Yoga Articles / Deepening • The Yoga of Life / How Yoga Helped Me / I am exactly where I am meant to be 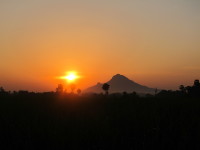 Arunachala, a sacred mountain of Shiva

Twenty years ago a friend mentioned to me Arunachala, a sacred mountain of Shiva, (a representation of high consciousness in yoga or to devoted Hindus one of the many forms of God).

Many know it due to the great Saint Ramana Maharishi who has and still inspires millions in the quest to discover;

“Who am I?…not Peter or Jane or this body or this mind, but who am I really?”

For some reason, this mountain of Shiva became lodged in my mind yet despite fourteen trips to India over the last sixteen years, my feet never ventured South.

After planning the trip, I cancelled it due to my short time frame in South India… however an overwhelming feeling that I must come kept pushing its way into my consciousness. Jet Airways profited from my indecision!

I spent some time in a Chennai traffic jam sandwiched between the beeping horns of cars, buses, three wheeled rickshaws, motorcycles, bicycles, bullock carts. Colorful people old and young, rich and poor, cows, beggars, food and foot merchants with many wares all bustled by as my car stood at a standstill.

The hotel manager had told me it ends at 8pm. I didn’t know what was ending, but it was enough for my mind to start to think I was going to miss something as I sat in the traffic. I have always hated to miss anything! What could I do, as my powers to move traffic have not yet developed?

I came to my breath, chanted my mantra and had a divine moment of surrender and a feeling that I would be where I was meant to be at the right time. Relaxation….

After 12 hours travelling by plane and cars, I arrived at 6pm, a time of energetic balance, in which the sun was setting and the moon was rising whilst a flame that can be seen for miles around was being lit on top of the sacred mountain.

This only happens once a year coinciding with the special full moon of November and in my case, also an eclipse. So when one is in the present, there is nothing to miss.

Usually I like to be prepared for a new place, have a plan, but time eluded me thus I didn’t research or read guidebooks, I just showed up with no idea where to go or what to do. Planning gives security to the part of me that does not trust. Although being a Gemini with a twin mind, the plans often change anyways. I was forced to again surrender and have faith.

The thought came; “Wherever I am meant to be, please guide me.”

I was fasting for my pilgrimage, so settled myself with a quick shower and watched the moon rise and the fire grow from my window facing Arunachala. I decided I would begin my circumambulation of the mountain from the Ramana Ashram.

On the way there, an older woman, bony and deprived was stumbling along with her family supporting her. They looked desperate. We gathered her and six other family members in the small rickshaw and she leaned on my shoulder as if she knew me… the granddaughter had little tears running down her grubby face.

I cradled the sick woman’s body to protect her from the bumpy ride, poured a small amount of water in her mouth and patted the granddaughter on the head whilst chanting the Maha Mritunajaya healing mantra. There was no language we could share but serve, love and give, the instructions of Swami Sivananda.

As I delivered the family to the hospital an immense gratitude rolled over me to have been given an opportunity to help someone in real need. The driver told me in broken English, “You good, most people drive by.” I left them some rupees to pay for any medicine. I remember Swami Sivananda, who never had any money for himself or his ashram, because he gave it all to the needy. Perhaps if we all do more random acts of kindness, our world will be more peaceful.

The driver retraced the road and delivered me to my starting point. I sat in silence, preparing my mind and opening myself in the silent energetic field of the main hall of the Ramana Ashram, created by so many enquiring “Who am I?” and chanting sacred mantras over the years.

Departing at 9pm, I joined thousands of people in walking barefoot on the 12 km circuit around Arunachala. Despite that I had bruised my left foot that afternoon and was having a difficulty in the right buttock… a literal ‘pain in the butt’, I felt that this was a small tapasya or austerity, which is recommended in spiritual life, so I walked barefoot anyways, submitting my feet to the hard, dirty path below.

I reflected that many of the people near me, walked barefoot everyday, as they could not afford to have shoes. I tried to imagine myself without all the comforts that I take for granted.

All walked for their own reasons. Feverish and blind devotion in some, waving lights, offering money and bowing to each deity at temples dotted around the whole circuit and receiving back sacred ash or flowers and blessings from the priests at each stop.

I followed their lead, chanting my mantra every step and like the waves lapping on the shore, I bowed and offered myself and was washed with sacred ash, smiles and prayers for my wellbeing.

For many it may have been a tourist attraction, with cameras, ipods blaring and cell phones as their accompaniment, they enjoyed the food stalls selling hot teas, water, nuts and fruits and bought souvenirs of plastic toys, bags, malas and pictures of the sacred temples and mountain.

Some people chatted and some sang to Shiva. I periodically glimpsed the fire burning on Arunachala and the full moon guiding my steps and pondered on the fire within that needs to be strengthened and stoked to give motivation and illumination on the path of inner knowing.

At a point when my feet were aching and I felt to ready sing kirtan, I came upon a huge temple with a large Shiva Lingam or symbol of highest consciousness. It looked as if they were getting ready to close being about midnight, but like a magnet, I was drawn inside this temple and into the inner chamber where people were gathering.

They said I could only watch from the outside, but when I introduced myself as a Swami of the Saraswati lineage, the doors opened and I received a grand reception and gifts. Despite the offer of a couch, I sat with the women on the floor trying to blend in.

The whole room was lit with candles and as I sat, singing began… one hour of devotional singing with a group of strangers, our only connection; love of something high, call it what you like; vibration, Goddess or God, the heart opens and the mind relaxes.

This ended in a circumambulation of the central altar, conches, drums, cymbals and chanting… I followed the procession into the street to find a travelling altar, people pushing to get close and receive the blessing, so I flowed with the river of devotees bowing at the altar. Afterwards, I was told that I was very very fortunate and that this particular procession, where these deities are brought out from their home in the temple beneath Arunachala, only happens twice a year.

By now it was 1:30am and the road was quieter as I walked, mantra on my lips and a feeling of grace accompanied me. Although feet sore and coming on 2:30am, I completed my circle of the holy mountain filled with an energetic force and a knowing that despite how imperceptible, and without a way to say exactly what or how these things happen, another layer has opened within me.

“Being in the present, allowing life to unfold, as it will, with trust and acceptance is very powerful indeed.”

Swami Karma Karuna has received yoga training in Nepal, India and Australia. She spends 3 months each year living and teaching in India at the home and sadhana place of Swami Satyananda.For more information on these guided yoga retreats to India and the World Yoga Convention in Bihar click here.