You are here: Home / Yoga Articles / Deepening • The Yoga of Life / How Yoga Helped Me / How My Ashtanga Practice Taught me to Practice Courage 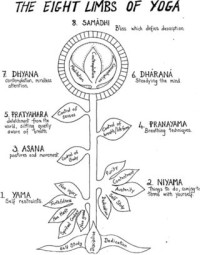 Eight limbs of yoga, as defined by Patanjali in Ashtanga Yoga, which forms the foundation of Ashtanga Vinyasa Yoga as taught by Pattabhi Jois.

After all that darkness of my last article, I decided I wanted to up my practice. I wanted to devote myself and commit to the Ashtanga practice as it demands: six days a week. To take on the challenge and see the benefits of a regular practice. Two weeks later, I hadn’t practiced yoga even once. It’s now been a couple of months since then. I did get myself back into the yoga room, but only for a couple of weeks.

Turns out that although you can do yoga anywhere and anytime, sometimes life really limits what that looks like.

Not having space to even roll out my yoga mat in my room (we live in a room, in a building full of rooms – not to be confused with apartments – think student hostel with more cockroaches, mice and poop in shared toilet) has meant that my yoga has been a lot less Ashtanga, and a lot more shavasana, or random postures that I can do in extremely limited space, often along with some adjustments for the physical circumstances. Even though I failed to live up to the goals I set when I started my Ashtanga practice, I have certainly learned a lot about yoga and about myself. (And I try to focus on that rather than the failure) I have seen the hidden and horrible parts of myself. The parts that I like to think I don’t have. The judgemental, demanding, selfish, weak parts. Through my yoga practice I have learned that these things do not make me, me.

So this isn’t a story about heroically overcoming obstacles. I haven’t taken up a six day a week practice or suddenly become super flexible with the strength of the Hulk. I still can’t do headstand.

I have learnt that I can be courageous. That it isn’t necessarily fear that stops us from moving forward or doing something different, but instead it is the thought that we cannot do it and not committing to giving it a proper go. In the forward of Yoga Mala, the book written by K. Pattabhi Jois, his grandson Sharath writes about Jois’ saying;

“Yoga is 99% practice and one percent theory”.

Sharath explains that yoga is not just the physical practice of the asanas, but something which should also have a place in the rest of our life, in the way we live, including an awareness about ourselves and our internal and external behaviour. In some ways, I came to Costa Rica to get away. I didn’t have anything in particular to get away from; just a nagging sense of dissatisfaction. I felt like things should be different, but I couldn’t quite put my finger on it.

I’ve learned that you can run as far away as you can but your demons will still follow you – they’re inside you and hitch a ride along with you, no matter where you go.

The only way is to face them, and yoga has certainly helped me with that. As B.K.S Iyenger (a fellow pupil of Krishnamacharya with K. Pattabhi Jois) said;

“You do not need to seek freedom in another land, for it exists with your own body, heart, mind and soul.”

But I was missing something before. In New Zealand, I had a mostly regular practice, normally twice a week. I loved the classes and found them challenging and renewing, but the classes alone did not open up this level of awareness in me. It is only now that I am in a more personal practice to learn more about the other aspects of yoga that I feel more open to more than just the physical benefits of yoga. Somehow, Ashtanga has demanded more of me and in return, it has pushed and pulled me more, meaning that while I have had some horrible moments in it, I have also felt more changed.

In fact, I think the key to Ashtanga is that I show devotion and commitment even in the rough times, especially in the times when I don’t like it.

This would typically mean the six day a week, 1.5 hours a day, practice, but I had to accept that it was actually beyond my circumstances. I had to go deep into that guilt and disappointment, that cruel judgement of not being good enough (which comes up in other parts of life too), and convince myself that I was still good enough if I could only make it to one class a week, or only do a shavasana before bedtime. It doesn’t make me a bad person. It doesn’t mean that yoga doesn’t serve me. Today we are leaving Costa Rica to move to Mozambique. It was something random that just popped up and we decided to go with the flow. As turned out, it worked out perfectly, as other parts of our lives fell away. It’s a big change that requires a lot of commitment and a lot of courage, but I think yoga has helped develop those two qualities in me. I don’t know what it will be like there. But I’ve got my yoga practice (the asana and the philosophy) and I will keep going into those dark spaces with Ashtanga. Except this time, it will be with the courage to face those scary parts of myself and work to show them love and commitment, rather than running away. 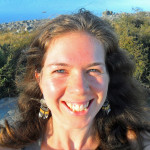 Pip Bennett is a consultant currently based in Costa Rica. Her background is in youth participation and women’s rights and she is also passionate about yoga, connection and stories.

She has just started to develop her own venture called cookingwithpip.com, which aims to support and link together fellow community development workers, bringing them together to celebrate themselves, each other, and innovative ways of working.