You are here: Home / Yoga Articles / Awakening • Creating a More Beautiful World / Musings from the Mat / On having the courage to pull the plug at the 11th hour 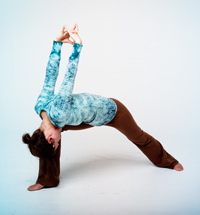 Sometimes we have to bow to life

Last week, I wrote the acknowledgements and officially signed off from Forty Days of Yoga, completing the final draft.

It was a surreal moment – as if I’d been here before and knew what to do. And of course I have, many times, in my dreams.

I’ve been a writer since childhood and always knew I’d write a book.

What I didn’t know was how many people would join me on this journey, how supportive they would be and how humbling it would be to receive their generousity.

Only five short months ago I was having a writer’s meltdown as I realised that the highly public crowd-funding campaign I’d launched for my proposed Best of The Yoga Lunchbox book was doomed to failure because it wasn’t meeting the needs of the community.

Even in the grips of failure, I had friends and readers reach out to me and tell me how much they valued The Yoga Lunchbox, how they valued me as a writer and that my time and energy would be much better spent writing an original work. That prompting led me to retreat to the mountains for the purpose of simply creating space.

I had no book in mind.

I had no plans to do anything.

I was just going to be.

And sitting in that spaciousness, taking hour-long walks around the boardwalk of Glenorchy Lagoon, a book idea popped into my head.

A small idea at first – write a short free e-book on how to create a home yoga practice.

That was something the community needed.

That was something I knew intimately inside out.

That was something I would be excited to share with people, because I know that creating and maintaining a daily yoga practice makes life better, in all ways.

Coincidentally, or not, I was reading Automatic Author at the time, a info-product by Slade Roberson designed to painlessly birth author’s book ideas onto the page. With his help, I took that fledging book idea of mine from a dream to a first draft in less than four weeks.

I’d already had 15 people volunteer to be beta-readers, taking on the not-so-inconsiderable task of reading, editing and commenting on those 40,000 words within a tight time frame.

I choose three people, based on their speed of response, writing style, variety of yoga experience and secondary skills. Later, I added one of my yoga students from my Glenorchy Community Classes.

From the moment the first feedback started rolling in, I was humbled and grateful both for the quality of work each of the beta-readers had put in, and the insightfulness of their responses. I was also curious to note that each of the four picked up on different elements of the book, giving me wide coverage that helped shape the final material.

With their help, the book became far better than it ever could have been if it was just me writing it.

A week or so later, I got an email from one of my beat-readers Sara Foley, letting me know that not only had she started her Forty Days of Yoga, but she was writing about the process on her website. She sent me a link to her first article, and my first review of the book.

The book had yet to launch. I’d not thought about any kind of marketing. And out of no-where I’m gifted a review. Not only that, but the review was detailed, precise and enthusiastic. (As was Sara’s follow-up article to be at the completion of her Forty Days.)

The good news kept rolling. Within a week, I’d been contacted by my first radio station requesting an interview on The Mary Jones Show to talk about the book.

Now I knew I was on track, on purpose, and just plain on.

In the four years of publishing The Yoga Lunchbox, despite occasionally contacting media to attempt to get coverage, I’ve never had any publicity at all. Now, doing nothing, it had effortlessly arrived.

This was the state of flow and presence that I’d intuiitvely known was absent when I’d been pushed and striving to make The Best of The Yoga Lunchbox PledgeMe Campaign. This was why I’d had a meltdown. My failure to hit the mark in that instance had triggered deep feelings of worthlessness and fear.

Thanks to yoga and my daily practice, I knew enough to sit with those feelings.

I recognisised the moment for what it was – a gift. That meltdown finally brought to the surface the unconscious motivation which had been driving me and all I’d done with The Yoga Lunchbox. I wanted to succeed so I could feel useful, valuable and worthy.

Life on the outside can’t give us what we perceive we’re lacking on the inside.

Prior, I hadn’t know this dynamic was at play. Now, thanks to my meltdown, I could see it clearly. I could feel into it and in doing so create space and opportunity for release and healing.

I surrendered and let go and said:

Cue retreat to the mountains.

And arrival of book.

Funny that eh? That our moment of surrender is often what precedes our greatest gifts.

But how could it be any other way? In order to receive, we have to be open and receptive. When we’re pushing and striving and driving we’re on the opposite current of energy. I was so busy giving, giving and giving some more that it was impossible for anything to arrive for me at all.

In the surrender and peace of the mountains, as I walked with my son, many things became clear. The most poignant was that success was inevitable. All I had to do was be me, and in being me, whatever gifts and talents I had to share with the world would naturally surface.

I wish I could practice yoga every day.

I noticed that people around me were suffering from ailments of the body and and mind that I knew could be helped by regular home yoga practice.

And I had a potential solution. I could give people a tool, a process, a way to build that home practice so they could relieve their suffering.

My intention for creation shifted from trying to prove something to meeting the needs of my community.

With that shift came an out-pouring of support from my community. My process of creation became co-creation.

I never could have done this without my friends, family and the wider Yoga community.

Most of all, I never could have done this without my yoga practice. It’s my practice that’s given me the ability to turn and face life directly, feeling into the subtle undercurrents of my body and mind. It’s given me the courage to listen to those undercurrents and make 11th hour decisions like pull the Pledge Me Campaign.

Courage. That’s where it’s at.

Courage to pull the plug.

Courage to be empty.

Do you want a home yoga practice? Sign up now to the Forty Days of Yoga Book Launch List and go in the draw to win one of three copies on the day the book launches. Plus you’ll be the first to know.