You are here: Home / Yoga Articles / Awakening • Creating a More Beautiful World / Musings from the Mat / How I Finally Kicked my Co-dependent Relationship to the Kerb 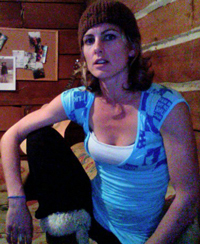 Strong, independent, courageous Moi was stuck in a co-dependent relationship.

Despite getting wind of this fact about halfway through our 3 year or so relationship, it took me another 18 months to break the pattern. Which in the end meant breaking off the relationship.

This relationship had been increasingly volatile ever since I got back from Prana Flow yoga teacher training in LA.

I’d made a commitment to myself on the return plane flight that I would practice staying loving and open, while speaking my truth in a non-violent way.

It’s something I’ve sucked badly at for a long time. The loving and open bit I had down pat. Speaking my truth not so much. I was always too afraid of my partner’s reaction, too afraid of losing the relationship, just too damn afraid full stop.

Which are some of the signs of being in a co-dependent relationship – being afraid to speak up.

So on my arrival back in New Zealand, I began to really speak up. This created conflict – lots of it. But it also created evolution and movement and it felt like our relationship was moving into a space it had never been in before.

Until  the week of the full moon/ summer solstice/ lunar eclipse in December 2010. Talk about a triple whammy.

We were camping up at Glenorchy in the caravan my Dad and step-mum had given us, on my Mum’s front lawn.

I’d had six days myself there over the Summer Solstice and had done a lot of fear-facing.

I’d gone deeper into myself than ever before, staying with all the ickiness as it arose, getting up close and uncomfortable so I could finally see why being in a relationship triggered all these insecurities and fears which made me a pathetic, hyper-emotional, insecure, needy woman.

My partner showed up on Christmas Eve. And every single day we’d ping-pong between this loving state of closeness and fiery confrontations about behaviours.

I just wasn’t going to let anything go, because after being in LA I knew that it was possible to be in harmonious, loving, open, joyous conscious relationships where any angst can be worked through with loving-kindness, and damned if I wasn’t going to be that way.

My partner reckoned if I could just chill out and relax, everything would be fine. But that’s what I’d always done previously – just let things go because I didn’t want to rock the boat. Problem was, then I ended up living with all these behaviours and situations which I didn’t want to experience.

Plus in those six days over the Solstice when I’d gone deep, I’d got to the source of my fears and realized that for whatever reason, deep down in my core I had a belief that meant I didn’t feel safe and secure unless I was in a relationship.

That belief created a need for relationship, and that was the strongest motivation operating in my unconscious – and it was the reason why I’d never rocked the boat previously.

God knows where it had come from, that deep fear and insecurity because it certainly doesn’t sit with my ideas of who I am.

But there it was, buried deep, the reason why I’d always been in co-dependent relationships.

It was also the reason why I’d always turned into this insecure, needy, fearful woman once I fell in love… ‘cos I was petrified of doing the ‘wrong’ thing and losing the relationship. I blocked my own truth and power out of fear.

This was a deeply embedded samskara (impressions derived from past experiences that influence future responses and behavior) that had been ruling my relationship behaviour for many, many years.

I wasn’t going to let my unconscious need for safety and security dictate my behavior anymore.

It was a long time coming, this point, and there are many reasons why I was finally able to do it  – remember I’ve left seven times before but never managed to stick to my decision. And I always allowed myself to be wooed back – because my partner is nothing if not charming, charismatic, gorgeous, articulate, witty and intuitive. And I loved him to bits, wanting nothing more to have our relationship work. That desire was so, so, so strong.

This time was different though. and here’s why:

About five weeks ago, I had a cord-cutting with Anna Conlan – an energetic procedure where she cuts the negative cord of attachment between two people.

This sounded pretty woo woo to me, but I’d had one done previously which had had tangible results, and I when I got back from LA I was willing to do anything to sort out my relationship once and for all.

Anna goes in, does an energetic reading of the way in which two people are connected, cuts the cord, and reads the dialogue contained within it – the unconscious agreements that we make when we enter into relationship with another person. And she does it all by phone.

The unconscious agreements I’d made with my ex-partner Luke were so unhealthy it wasn’t even funny – here’s one stellar example:

I love you so much and will do anything that makes your life better, even at my own expense

What was I thinking!? Well, I wasn’t. This was an unconscious thing… but wait, there was more.

Anna also said that our connection was so tight and so strong it was like we were the same person. Energetically I’d always felt this – that my partner’s feelings were my own and vice versus. Makes it real hard to break up with someone because all their pain becomes yours.

Immediately after I’d had the cord cutting I noticed a huge difference. I could feel my strength and power and felt… contained. Like I was me again. In many ways, this was the real beginning of the end. From this place, speaking my truth and holding to it was finally possible.

This was the longest I’d spent away from my partner for three and a half years and it was an eye-opener in many ways.

Living with an addict means living with mood swings, lies, broken promises, and words that never mean anything. An addiction means that someone’s focus is entirely on their own internal state. They’re incapable of responding to the needs of the people around them, and they are so not present.

Which brought me right back around to speaking my truth. Even if I was afraid of what might happen. So I did, I spoke loud and clear.

Now would I have stayed in my unconscious pattern if those two things hadn’t had happened?

Previously, I’d struggled enormously to make sense of the situation. I knew we loved each other enormously, and I always thought that if I could just sort myself out then the relationship would be easy. That somehow it was my fault things sucked, so it was in my power to make it all wonderful.

If I could just do the right thing, he’d be happy.

Such is the delusion of co-dependency.

Not me. Not anymore.

I finally got courageous enough to turn around face my fears head on.

Which is another reason why this time is different. Previously I’d always run away from the relationship, leaving because I was upset at him for not being how I wanted him to be. This time, I stayed right where I was, continued to love him, and stated:

I don’t want this in my life anymore.

I stopped being the victim of his behavior and become the creator of my own.

Yep, I stopped being a victim and started being a Goddess.

I mean would Shakti stand for that kind of bullshit?

I don’t think so. So why should I?

Result? One co-dependent relationship kicked to the kerb. One needy and insecure woman outed, hugged, consoled, and sent on her way.

Oh she stills shows up now and then and my ex-partner and I negotiate our new relationship as parents to Samuel, but I can feel the energetic difference so strongly that I know instinctively that I’m blocking my power by not speaking up. Just being aware of this helps me choose a different a road – a road of truth, power and aliveness!

I know now too that I’ll never be in another co-dependent relationship. This is one damn pattern I’ve broken once and for all!