You are here: Home / Yoga Articles / Awakening • Creating a More Beautiful World / Musings from the Mat / Confessions of an ex-relationship manipulator and control freak 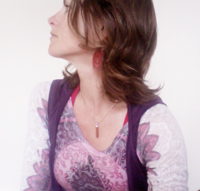 Turning away from the truth causes suffering

Ok, the headline is harsh. I admit it. But also true.

See, over the last while, I’ve been working with a relationship pattern (a samskara) of giving away my power by not speaking my truth because I was afraid of the consequences.

It’s an insidious pattern because it has all kinds of detrimental effects on one’s self-esteem, and the relationships one is in. Plus it creates suffering as the desire to hold on to something while betraying oneself can only ever create misery.

The pattern itself is pretty basic.

It begins with attachment to love or approval, and the idea that these things are something that I’m getting from my partner.

Because I want to continue to receive the love and approval, and that desire is strong, I modify what I’m saying to make sure that I don’t say anything that might jeopardise that love and approval.

This is manipulation – I’m saying or doing what I think is necessary in order to create a specific result. It could also be seen as a tendency towards controlling life.

And it’s all fear based. I’m afraid that if I am just me, I wont get what I want.

Thing is, if my partner can’t handle the truth, why would I want to be with them anyway?

Because I’m attached to the love and approval which I perceive as coming from outside of myself. And also because in the past, when I spoke my truth, I’ve had partners leave.

So this was an unconscious behaviour for many of my relationships, a samskara that continued to deepen everytime I left it unexamined. Finally though, this samskara became conscious in the nearly four-year relationship I had with my son’s father.

Yet even after I separated from my partner (because, yes, I spoke up), I could see that old pattern continuing to play out. I kept modifying myself to manage my now ex-partner’s responses, trying to keep him on side so child access could run smoothly.

I was aware of it, so I was able to observe the pattern in action and muse on it. Now that I wasn’t with this man, I could see I wasn’t keeping quiet to retain love and approval. There was something else driving my action – I was keeping quiet to avoid trouble.

Finally, I couldn’t do it any longer, and did what I knew I had to do, and applied to the Family Court for an interim parenting order. I’d spoken my truth – which was that it was really important to me that we agree on paper exactly how we’re going to each spend time with Samuel, by focusing on what’s best for him.

Right about that time, as the shit hit the fan and life got crazy busy and stressful, friend and yoga teacher Melissa Billington suggested I check out a particular practice – Meditation for Prophetic Insight and Power of the Word.

Only she didn’t call it that – she called it by it’s Sanskrit name of Drib Dhristi Lochina Karma Kriya.

Melissa’s a wise woman (find her at Powa Centre in Wellington), and I was stoked to have a practice recommended to me. And after just one 15 minute session, I was hooked. I’d found a new sadhana. One of the claims of this meditation is it gives you the power to speak the Truth in any situation.

Talk about dealing once and for all with that old samskara of mine! It was the perfect yoga practice during this tough time. Plus there was another reason why I’m determined to break this pattern once and for all – I didn’t want it to carry it into any new relationships.

I may have now been conscious of the pattern, but it was still very real in my life. See, samskaras go through different stages.

First they’re unconscious – why don’t know that this pattern exists, nor that it’s driving our behaviour. Then it becomes conscious as we see our pattern, and we see how it’s creating our experience. Finally, we get to a place where we’re able to drop into the gap between trigger and reaction. This is when something happens that would usually cause us to act in our patterned way, but we catch ourselves before we do the same old thing and we make a new choice.

That’s what it’s all about for me right now.

Experiencing new ways of being.

I’m focusing on speaking the truth in all circumstances, regardless of the trouble I might cause, the love I might lose or the approval that might be withdrawn.

I’m still applying ahimsa (non-harming) and discernment to this, as truth must still be handled with wisdom. There are times when it’s wise to keep quiet. But mostly,when I sense the urge to censor myself, or I sense the urge to attempt to manipulate the situation by remaining quiet or agreeing, or the urge to pretend something other than what is true for me… I take a deep breath and speak up.

That’s changing samskaras for you.