You are here: Home / Yoga Articles / Awakening • Creating a More Beautiful World / Musings from the Mat / Home is where the heart is, heart is what the home needs 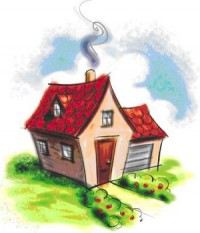 The latest Musings from the Mat by Kara-Leah Grant

It’s a deceptively small four-letter word, but oh how much punch it can carry. Our home is our whole world when we’re kids, and when we grow up to be adults, we often unconsciously carry around that childhood home inside of us, even when it’s not the kind of home we want to recreate in our lives.

Home isn’t just the place where we live though.

Home is also a place where we are truly ourselves, where we let our guard, and our hair, down.

Home is the place where we feel comfortable, and comforted. Where we’re safe and secure against the world out there.

When we truly find peace, home is also a feeling-state we carry in our heart always.

And when we carry that feeling-state in our hearts, we can turn any old place into home.

All it takes is warmth – keep the firing blazing, food – always a pot of something on the stove, creativity – art on the walls or music in the ears, family – photos & laughter and love. Lots of love.

Those are the ingrediants I’ve learned to carry with me wherever I go, and believe me, I’ve been a lot of places, and lived in a lot  of houses.

When I was overseas, I once counted up how many different houses I’d lived in between 1998 and 2004. These were the years that I lived mostly in Whistler (Canada), with brief stints in Sydney, Melbourne, Hawaii, Mexico and Costa Rica.

The final tally was 30 plus. Yep – over thirty different houses in six or so years. I lived everywhere from an expansive farmlet on the side of Ulupalakula Volcano to a bedsit in the backyard of my boyfriend’s parent’s house in Melbourne.

I once shared a laundry room for eight weeks with a washing machine, a dryer, a leaking roof, my cousin and her large dog.

Yep, accommodation was tight in Whistler that year and I’d arrived back after the first snowfall – rooms were non-existent.

I did finally find somewhere else to live – a half-built mansion nicknamed The Castle. There was no floor and you had to hop from beam to beam to get to the stove which sat in the middle of an otherwise empty kitchen-to-be, but hey, no more leaking taps above my head!

Since returning home from Canada in 2004, I’ve lived with my Mum, and I’ve spent a fond month with my grandparents listening to tales of their lives (the last quality & quantity time I was able to spend with them). I’ve lived in the aptly named Lilly Pad with two girlfriends, an apartment perched on the hill above Queenstown, just spitting distance from the goings-on of party-town central.

And I’ve lived with two partners – the last of whom I shared seven different houses with on two different islands spread over three cities and three years.

That’s a helluva a lot of coming and going.

This year, after a restful and healing four months in Paekakariki, I set up home again with three cool people – four if you count Samuel, now 21 months old.

We moved into our new home on Happy Valley Rd in May, and our intention was to be a Flat Family – of the bestest type. We knew that living in close quarters would bring up our shadows, that we’d rub against each other, that there will be ups and downs. But right from the get-go, we had plans on how to work with that – and it all started with lots of honest conversation and compassionate listening.

When shit comes up – we’ve dealt with it.

No hiding, no pretending, no passive-agressive behaviour, no bullshit.

Ok, so there has been a little bit of that stuff going on, but at least one of us has always caught it and called the others on it.

And it’s been really good for me.

I’ve never lived like this before – my tendencies, both in relationship and in living situations with other people – has been to stay quiet and tip toe around the edges. It’s a way of being I learned at home as a kid, and even though it’s not how I would self-identify – that’s the thing about home. It’s in-grained in us from the moment we’re born.

My parents divorced when I was 12, and it felt like our home disappeared over night. I’d already learned to deal with my emotions by pushing them away and throwing up a wall around myself for protection.

My mum threw herself into work to support three fast-growing kids, and with no one to tend the home fires, it just became a through-station on the way to somewhere else. At least, that’s how it felt to me, because that’s how I treated it.

The subconscious message that I soaked up as a result was that ‘a home’ was something that came with a Mum and a Dad – and I suspect that one reason I’ve valued relationships so highly through my adult years was that I thought I needed a man to create a home.

But that’s the thing about Western Society.

We get indoctrinated into a belief that there is just one way to live.

That is, two people in a partnership living together in a single dwelling, with or without kids.

Flatting is just something you do before you meet the right person and make enough money to strike it out alone.

But you know what, that’s not true.

Alys, Joseph, Mary, Samuel and I have proved that.

Happy Valley is one helluva happy place to live.

It’s a Home. Of the highest order.

No where else have I ever spent 2 hours scrubbing out the oven just because I felt like it.

The walls that I put up around my heart when my childhood home diasappeared have finally come down.

Home is where my heart is.

Heart is what my home has.