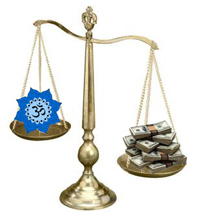 We’ve all heard about those wonderful yoga studios delivering fantastic yoga to the community, but struggling to pay their overheads, let alone make any profits.

On the flipside of the coin are the corporate yoga studios and centres paying yoga teachers as little as possible in order to maximise profits for the business owners.

Somewhere in the middle are the yoga teachers that schlep themselves all over town teaching in community halls, gyms, offices and other studios, with low overheads but also often low profits.

So why is this?

Why is it so difficult to make a living wage as a yoga teacher? Here’s some relevant points.

First, delivering a service such as yoga teaching is very different from being in business. Business and yoga are two different skill sets. So the yoga teachers that set up yoga studios don’t necessarily have the skills required to make their business sustainable – i.e. able to pay for itself. Same goes for community teachers – they’re having to market their classes as well as teach them.

Second, everyone wants to be a yoga teacher, so there is an over supply of teachers on the market, which devalues what’s being offered. And despite the low rate of pay for yoga teachers, more and more trainees are being churned out by teacher training programmes up and down the country.

Third, yoga has exploded on the internet, usually available for free or for very little, so students don’t even need to go to class anymore. This overabundance of available yoga also devalues what’s on offer.

“Yoga? Who needs to pay for that? YouTube’s got it for free!”

Fourth, the market has pegged the cost of a yoga class at somewhere between $10 – $20 a class, irrespective of what it might cost to produce that class.

Four, teaching yoga has a low billable hours rate. What does that mean? For every hour I put into myself as a yoga teacher (practice, study, planning, marketing, etc), I can only charge for maybe every 3rd or 4th hour or even fifth hour. That’s the hour when I teach.

Fifth, yoga teachers are limited in the number of students they can serve in one class – usually 20 or so (to be able to safely monitor the alignment of all students), so the business model is not easily scalable. You can’t just pile in 50 students to make it worth you while to show up and teach.

What does that all mean?

Let’s say Surya teaches a community yoga class every Thursday night for 90 minutes, which involves being on site for 2 hours.

She has an average of 10 students show up every week, and she charges them $12 for the class. That’s $120 for 2 hours work. Some people might think that’s pretty good going. But remember Surya is self-employed, so this isn’t her take-home-pay, this is her revenue. And it’s not really 2 hours work to deliver that class either.

It takes Surya an hour each week to plan her class and choose her music. (She’s already got a great selection of play lists and class plan templates to work from.)

Three times a year, Surya creates posters advertising her classes, prints them out, and posts them up around town. She gets a deal from a graphic designer friend so only pays $100 all up for each print run. As Surya teaches 48 weeks a year, that’s $300/48= $16/wk It takes her an average of 15 minutes a week to keep posters up (2 or 3 hours each print run to put up new posters, and then occasional maintenance of posters on random weeks).

Surya also has a website advertising herself a yoga teacher. It’s difficult to break down the cost of her website on a weekly basis. But assuming fixed costs of around $300 for hosting, URL and occasional help with design, it’s another $15/wk.

Every year, Surya continue to up-skill and train, spending at least a week or two on various trainings and workshops. She spends about $1000 a year doing this, or $20/wk.

Total cost to deliver that class: $91

Now, out of that $29 that Surya has received for 3 hours of her time, she still has to pay tax. She needs to buy yoga clothes, and music to run her classes. As Surya is self-employed, she also needs to run all her own business accounts, and receives no holiday or sick pay.

However, some of Surya’s costs are fixed, so if she added another class per week, it would probably still cost her the same amount to design, print and distribute her posters.

This gives you an idea of the costs of delivering a community class. And raises the question, as a yoga teacher, why would you bother? Less than $10 an hour, before tax, with no holiday pay or sick pay? That’s if you can maintain at least 10 students every week – how many times have you been to a yoga class with less than ten students?

It also raises the question of whether or not there is a better way to do it. Can Surya structure her classes so they are more financially viable for her?

Generally, there’s only a couple of ways to increase the profitability of what you’re doing.

She could ditch her website, or find a cheaper way to do her posters. She could give up planning her classes and teach on the fly… but all of that is either going to make it harder to market her classes, or reduce the quality of the classes she delivers. She could stop training every year, but then she wouldn’t have new energy and knowledge to teach from.

She could increase the number of students in her class. That would require more marketing, a better strategy, more promotional material, more time… and cost more.

Surya could increase the cost of her classes. But in her area, $12 – $14 is the going rate for yoga classes so if she upped her prices, she’d lose students.

All of which makes me wonder…

Is yoga inherently “unprofitable” unless you deliver it on a scalable model (more students, lower costs)?

Do we undervalue a yoga class?

Do we undervalue yoga teachers?

Are yoga teachers doomed to have second jobs in order to support their families?

How can we as a yoga community collectively enhance our business skills so we can deliver yoga in a way that supports us?

I don’t have any answers to these questions right now.