You are here: Home / Yoga Articles / Starting • The Foundations of Yoga / Home Yoga Practice / You’ve got to know when to hold ’em, know when to fold ’em 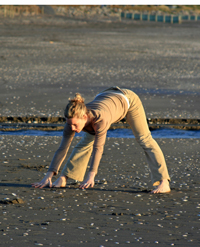 Are you holding when you could be folding?

The more I practice yoga the more I realise it’s got nothing to do with “flexibility”. At least – not in the way that we often think about it, as the stretching of muscles.

Rather, yoga often has to do with letting go and releasing our nervous system and the patterns of holding that result from years of activating the fight or flight system.

These patterns of behaviour create the shapes of our bodies, as much as our muscles and bones do.

Character structure describes over-all patterns of armouring in the body. Alexander Lowen describes six basic character structures… based on the pioneering work of Wilhelm Reich. Unerstanding character armour is very useful in working with the interfcae between body and mind…

This means that the way we hold ourselves comes from our minds and thoughts – it’s is sent through the nervous system and creates patterns in the body that manifest as body structure.

I see this in my own practice.

Recently, I did my first Bikram class in a year or so. Bikram yoga and I have a long relationship, and I appreciate the constancy of the practice. It means I can turn up to any Bikram class, know exactly what I’m getting. It also gives me something consistent to compare my body too. I can note the changes.

This class was brilliant. I was able to discern as we moved through the standing series that my lower back was seizing up because it thought it needed to protect me. I could feel energy wanting to release through my upper back, and being held by the lower back.

As we moved on to the floor series, I was able to consciously release that tension when we lay in savasana. However, with each posture, the back would again insist on seizing up.

There was no discernible physical reason for this. This was the activation of an old pattern in the nervous system.

By the time we got to Camel Pose, I was so tight I could only bring my hands to my lower back and focus on breathing into my body. No backward movement was possible – even thought I knew my body was physically capable of arching back into Camel with my hands on my feet.

During the final, long savasana, my back released entirely and by the time I’d finished class, it felt amazing.

I’d gone from a normal back, to a tight-seized back and back again within the space of 90 minutes.

This is nothing to do with muscles. This has to do with the nervous system.

This has to do with how we hold ourselves against life in order to keep ourselves safe.

Imagine you’re in the jungle and hear the low growl of a tiger. What happens? Instantly the flight or fight aspects of the nervous system are activated. Everything is turned on to ready you to either flee the tiger or fight the tiger. You stay like that until the threat is gone and you can relax.

But what would happen if you never relaxed? The crouched position you assumed as you wildly looked about to figure out where the tiger was and the safest place to flee would become your posture. That’s how you would be and how you would move.

This is what happens to us as children. Often we don’t perceive that we are safe – we feel emotionally threatened or physically threatened. We seize up, we shrink away, we hide and we shield ourselves. When those threats are happening on a regular basis, those patterns become our bodies. It becomes the way we hold ourselves.

When we begin to practice yoga, we often bring those holding patterns into our practice.

Often, this can mean that we inadvertently work against ourselves in postures.

A key example of this is the way our pelvis moves. Often we’ve developed a holding pattern around the hips – we grip the front of our hips tight. Sometimes this is a result of holding onto emotion, which can often start to arise in the very lower belly. We hold that emotion down and in doing so hold our hips locked tight which can cause lower back pain.

When we come into postures like a low lunge, we activate that familiar holding pattern and attempt to hold ourselves up in the posture via gripping the hips and thighs. All the while we’re also attempting to release the groin and hips to melt into the pose.

It’s impossible to do both at once.

Fortunately, there are ways to work with this. Most of us don’t have the sensitivity to release the hips on command – we don’t even know we’ve holding them in the first place! However, by using techniques like pelvis pulsations in lunges and squats, we can use activating movements that makes it impossible to fall into our habitual holding patterns.

Through these micro movements of the body while in posture, we can circumvent our natural tendencies and learn how to let go.

A week after that first Bikram class in a year, I went back. My focus this time was to circumvent the holding pattern of my lower back. As I lay in savasana waiting for class to start I repeated a mantra over and over again.

Before class even started the heat felt oppressive and I wanted to flee the room. I knew it was going to be a tough class. But I persisted.

In every posture, I focused on releasing through the ascending breath down the backside of the body while repeating my mantra.

Physically, I found the postures almost impossible. I wanted to sit down in most of them, yet I knew I had the physical capacity to make it through and it was my mind wanting to avoid facing myself.

Finally in Wide-Legged Forward Bend I felt something release and let go. The tears started to fall. The thing that I’d been holding back and protecting myself again in class last week that had caused my lower back pain – old unfelt emotion – came rising up to the surface.

I began to cry.

All the while continuing to move through the postures. Fortunately, there’s always easy-access tissues in any Bikram class so I grabbed a handful, blew my nose, and moved through the class.

I faced down an old defensive emotional pattern from childhood – a pattern that created the physical structure of my body – and let it go.

In doing so, my body is able to let go of it’s holding pattern and change.

Holding patterns, character structure or body armour – whatever you want to call it – is subtle. It often looks like just the way we are. And to a degree, it is. We’ve been that way for so long, that often we don’t know we can change. That our bodies can change.

But we can. With yoga, and persistence, and ever-increasing awareness we can tune into our internal experience and begin to notice when we’re holding and when we need to fold.

Often teachers are vital as part of this process, as they can see our holding patterns and give us appropriate instruction.

But if you don’t have a good yoga teacher, a mirror or video camera can be just as handy.

It wasn’t until I watched this short video of myself practicing spontaneous flowing yoga that I noticed how much tension I was holding in one side of my body. Armed with that awareness, I’m able to feel into the holding and consciously release it whenever the old patterns asserts itself.

So if you sometimes feel like you’re never getting any bendier, or you have certain postures you hate because you just get into them, consider this. You may be unconsciously holding yourself against those postures. Talk to a good teacher, practice with a mirror or video yourself and watch it back. See what you can see.

In the meantime, watch this short video of me and see if you can notice which side I’m tensing up and how it affects the flow of my practice. You’ll also notice how I often use pulsing, or breath-led micro-movements to create release and flow.