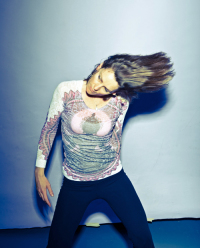 Get your dance on

If you know me, you know I love dancing. Always have, ever since I saw Flashdance at age 8, and got hooked on the original Fame TV series.

That was me… always dancing. But there was never any chance I could become a professional dancer because I had zero flexibility, plus at age 16 I had a spinal fusion. (I still remember the first day I danced again after that operation… the doctor said three months, I gave it two.)

However… life moves in mysterious ways and in my 20s I ended up getting paid to dance freestyle at nightclubs and events in Whistler & Vancouver, sometimes dancing in wild costumes in front of crowds of up to 15,000 people.

Somehow, despite my physical limitations, I’d found my way to professional dancing anyway!

Fast forward to 2004. I’m back in New Zealand and can’t find any decent beats anywhere… Instead, I resort to dancing in my living room where I found that my dance would often lead to yoga, and, just as often, my yoga would lead to dance.

But yoga and dance aren’t meant to go together are they? I felt guilty and conflicted as if I was doing something bad.

Again, life stepped in and I found myself in a Prana Flow Yoga Class withTwee Merrigan. Something switched on inside of me – this was the space where yoga and dance came together as spontaneous flow of life within.

I sought out Shiva Rea, Twee’s teacher, and got my teacher training certificate in Prana Flow, plus a certificate to teach Yoga Trance Dance™.

It’s a way of using our breath and body to step into trance through the twin vehicles of yoga and dance. It’s a deep letting go of all thought and a surrender into the depths of your being. And, after years of dancing freestyle for big crowds, I found teaching Yoga Trance Dance™ was a natural fit for my passion and talents.

If only I could do it with a DJ…

And, you guessed it, life stepped in again and I met Le Rire, aka R.I.A of Yoga Rhythms at Power Living Yoga Teacher Training in Bali. I floated the idea of working together and after musing on it for awhile, Le Rire got back to me with a resounding YES! She asked me to do a couple of gigs with her up in Auckland… and we’re ON.

Despite what purist detractors may think, Yoga Trance Dance™ is not a whimsical yoga knock-off created out of thin air.

Shiva Rea, who primarily identifies as a mystic – one who looks for the source in everything – has a long and deep yoga history combined with study at a university level of dance anthropology. She spent ten years immersed in Ashtanga and studied with various teachers from the Krishnamacharya lineage plus she’s studied Tantra and Ayurveda.

In total, Shiva has decades of serious yoga study behind her.

The core of Shiva’s teaching and practicing comes from a twin focus on deep grounding and rooting within a tradition combined with an evolutionary impulse to grow and change.

Her evolutionary approach to Yoga Trance Dance™ arises out of a deep understanding and respect for Tantra, classical Indian dance and the Krishnamacharya lineage.

Plus, Shiva wrote her Master Thesis on Hatha Yoga and two thousand years of embodiment in the West. That is, Shiva is profoundly interested in the Western relationship to the body and how the practices of Yoga and Dance can bring us back into our body and into deeper connection to Source.

Within the yoga tradition, the yoga of dance postures are known as karanas and the essence of dance becomes a sacred offering of ourselves to Source. After coming across classical India dance while studying at Delhi University, Shiva went on to study Odissi, one of the eight classical dance forms of India.

While I only spent ten days with Shiva in 2010 it was enough to show me that my natural inclination towards dance as a form of embodiment and liberation had its roots in the sacred traditions of India.

From Shiva, I learned how to use the forms of a yoga class and breath-led movement to take students on a journey toward communal ecstatic dance and back again.

This is dance as Shakti – when we let go and open to the Goddess within us all, whether we’re male or female, and allow ourselves not to dance, but to be danced.

Then, we become like Shiva as Nataraja, or Lord of the Dance, the cosmic dancer who performs his divine dance to destroy a weary universe so the god Brahma can start the process of creation anew.

When we dance, we destroy our own world weariness and open up to creative flow again, knowing ourselves not as mind, but as spirit.

This is what the dance has always meant to me, and this is how I share it through Yoga Trance Dance™.

The 90 minute class starts with coming into sacred space – a joining together of our diverse energies into one flow, much as I start any of my Vinyasa Yoga classes. This might be through chanting, through pranayama, or through a combination of pranayama and asana.

From this place of unity, we open our body using breath-led, flowing movements familiar to many yoga students from a vinyasa class – such as variations of cat’s breath, variations of downward dog, and variations of sun salutations.

Now the body is warm and we begin to move more vigorously, still with directed movement, but now the asana is simplifying and speeding up – often using our limbs or extremities only. We begin to move off our yoga mats.

As we near the peak of the class, we’re now in free-form ecstatic movement. My teaching now depends solely on what’s required to hold the space and the energy of the group, keeping it spiralling upward into release and liberation even when people begin to flag physically.

Finally, the peak comes, and everything is released and let go of. Now the integration begins as we pull our energy back in to our bodies and bring ourselves back into our own space and into our mats.

Often, very little instruction is needed from me as the liberation of the ecstatic dance has freed the flow of prana and students are naturally taking themselves where they need to go.

This is the closing sequence of the class, where we stretch and release that which is required – backbends, forwards bends, twists, possibly inversions and finally, the entire class moves towards savasana.

This is Yoga Trance Dance™ – a solid, grounded, container within which to experience total liberation and freedom.