You are here: Home / Yoga Articles / Deepening • The Yoga of Life / Yoga May Not Cure Disease, But It Can Help Us To Live Joyfully With Our Illnesses 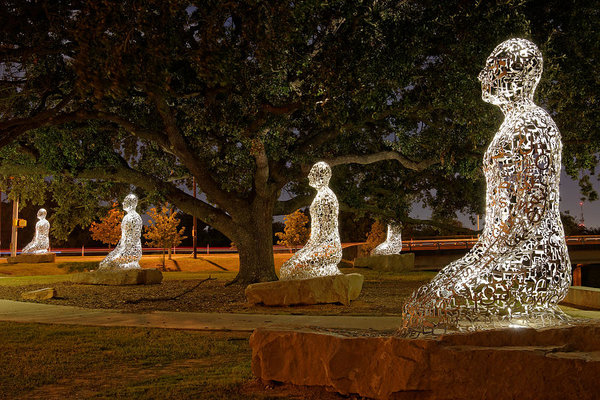 When there is no dichotomy between the disease and the yogi, you can in your disease find your spiritual identity. Artwork by Silvio Ligutti.

The whole notion of disease is an interesting subject. Those of us who take on yoga as a part of our lifestyle can easily find ourselves striving to be absolutely whole and well; after all, why shouldn’t we? To have a strong healthy body fit that enables us to integrate the various limbs of yoga is a noble endeavour indeed.

But is perfect physical health always a guaranteed result of a yoga practice? And have we failed as yogis if we find ourselves unable to cure our illnesses or diseases?

There are many examples in yoga texts about the potential of certain practices to eliminate disease.

The Shiva Samhita 4, 31-34, states that use of Maha Mudra will result in good health:

“In this way even the less gifted yogi will realise his aim. Vitality will increase, and all causes of decay will be destroyed. The fire of digestion will flare up, and all disease be destroyed.” (Yoga, by Alain Danielou, pg 55 )

The Bhastrika Pranayama is said to counter disease because it:

“Balances the humors of the body so that disease has no hold”(Yoga, by Alain Danielou, pg 79)

And the Siddhi asana/Siddhi Yoni asana is said to cure many ills:

“Among the immediate physical effects of this posture is the strengthening of the lungs and heart. Breathing becomes deeper and slower, the digestive function grows regular, and ailments such as colds, heart diseases, fever, and nightmares are cured.”(Yoga, by Alain Danielou, pg 44)

For all the above yoga practices one could no doubt find other benefits written by different authors, and many more practices of yoga that benefit one’s well being. But, while all this may read very nicely, how much importance should we give to it?

I can well remember striving myself to try and be invincible. Of course, yoga is not about being invincible, but sometimes it is necessary to learn the hard way.

There will be times when disease may well be an aspect of our lives that is our personal challenge to come to terms with.

I can speak personally here for asthma is a condition I have had to deal with all my life. The battle, so to speak, only resolved itself once I could finally accept that this was something I had to live with. Then it was to realise that herein lay my strength. For what better way to understand disease than to live with it and consequently have empathy with others who may suffer from any number of illnesses?

This is unity when there is no dichotomy between the disease and the yogi. You can in your disease find your spiritual identity. The thing is not to resist it, for as a cherished mentor said to me on many occasions, “what you resist persists”.

To live with a disease does not necessarily mean that you do nothing to help yourself. Quite the opposite really, for it is in acceptance that perspective can arise which enables a certain detachment from the effects a disease may have on your daily life.

One does all that is possible to achieve a healthy life and bring a spiritual dimension to living. A natural approach to medication (not to mention lifestyle) is always preferable, but there will be times when for want of a better word “modern” medicines and treatments will be required. If need be we should not refuse ourselves these treatments, for they are in no way a reflection of how successful or not our yoga practice has been. In a life or death situation, there will be no doubt a host of other factors to take into consideration.

It is not only physical disease that we refer to here, for mental illness is well recognised today and in particular, depression is an affliction that some yoga practitioners may have to deal with. We are even warned that the search for spiritual understanding can at times lead to a temporary state of depression.

There will be times when our karmic unfoldment means that we have to deal with disease. So it is important not to feel guilt or shame because you practice yoga and have either come down with some disease or have not managed to move beyond it or be cured.

I think it is good that we remember that some of the great masters of the last century had to deal with disease. Swami Sivananda of Rishikesh and Swami Ram Dass both suffered from diabetes. These two men considered to be enlightened individuals chose to live with their disease and perhaps this was a lesson to us. It is possible that our teaching is within that which we most desire to overcome.

Another master of the twentieth century was Ramana Maharishi. He has been a spiritual inspiration to many. A unique individual in that he attained enlightenment outside of a tradition, Ramana’s teaching was simple and direct. Towards the end of his life, Ramana developed cancer in his arm. It would eventually take his life.

Ramana allowed himself to undergo many treatments for this disease, primarily it would seem to appease his followers who were distraught at the prospect of losing their master. He however even though suffering much pain appeared to be quite detached from the disease. Requested by some followers to heal himself, he would not. He remained concerned for the well being of others and insisted on giving darshan to those who arrived daily for it.

Importantly he maintained a sense of humour, and although it may be diverging a little the following story is worth noting. In his book “Guru Ramana”, S.S.Cohen describes this moment.

“Sri Maharishi composed a verse in Tamil over which an English lady devotee grew very jubilant and looked forward to reading it in English translation, taking it to be a hymn in praise of the Lord of Creation. It turned out to be a laxative recipe, which Maharishi had written with his own hand in ten long lines. Bhagavan is bubbling with joy over it and is showing it to everybody like a school boy who has written his first poem.”(pg. 140)

In many ways, for those of us in the midst of society, it is more difficult, for we have a sense of duty towards those with whom we form relationships and our health can have a direct bearing on those relationships. Often the impact of our health on those who share our lives will distress us more than the actual disease. In this case, communication becomes more important than ever.

From a yoga perspective, we walk this planet because we have been given an opportunity to develop our wholeness as spiritual beings, and this is not contingent on our physical health. This wholeness may not happen in this lifetime, or it may after all enlightenment is only a breath away. But whatever our journey may be, and we are all on a journey, to be at ease with ourselves—and the ease or disease that we experience in our bodies—is a state of being that cultivates unity within ourselves, within our relationships and within the living space we call Earth. 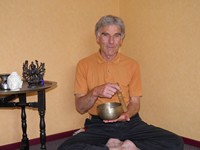 John began his yoga journey in December 1977, when by chance, he found himself at ‘The Institute of Yogic Culture in Trivandrum,’ South India.

He travelled through India, Ladakh and eventually to Sri Lanka where he spent time in two different hermitages, learning Vipassana meditation. In 1979, he returned for further training to the Yoga Institute in Kerala.

At the end of 1979, John travelled to Europe and met his wife Dominique in France. In 1981 they arrived in New Zealand and established a biodynamic property in the Waimate district.

In 1992-93 John did the IYTA (NZ) Diploma Teaching Course and in 1997 completed the post graduate short course ‘The Release of Tension through Yoga’.

John currently teaches nine Yoga classes, and two modified Tai Chi classes a week. He is enthusiastic about the place of Yoga in society, has a love of the natural world, enjoys writing poetry and has begun to practice massage once again. You can reach John via email.