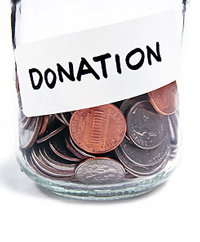 Back when I first started this website, I was teaching Prana Flow Yoga classes where students paid whatever they thought the class was worth.

This was an interesting experiment which generated a series of articles on how much a yoga class is worth.

Recently I received an email from a teacher in Namibia who’d found these articles via Google and was excited about doing the same thing with her yoga classes.

I’ve been thinking of switching to a donation based class and… I want the students to consider what this is worth for them.

I used to go to a donation based Buddhist meditation centre and I had the hardest time deciding what to put in the bowl. It was worth so much to me! But how do I quantify that in monetary terms?

So, as I consider making this switch, I’m debating how to tell the students. Do I give a little talk on mindfulness and valuing things? Do I send an email with a link to your blog post? I’m curious how you made the transition and if you have a flier or anything that you can send me that you use to describe it to your new students?

This email sat in my inbox for over a week, as I pondered how to reply, mostly because I’m no longer teaching those classes, and I wouldn’t teach ‘pay-what-you-think-it’s-worth” classes again.

I was no longer in the first-flush of excitement about making yoga accessible to everyone who wanted it.

Nope, I’d gone past that point awhile back and hit a more cynical “stump-up -the-cash” milestone. And also an ego-sobering moment of self-awareness.

This meant I couldn’t offer tidbits of advice on how to approach donation-style classes with students because I was over it.

Firstly, my motivation to offer these classes wasn’t pure. Turns out, on reflection, there was plenty of ego at play. Subconsciously, my reasoning went something like this:

I was hoping, secretly, that these classes would get 30 – 40 people rocking in to have a blast doing yoga.

I was hoping that based on the amount of money each class generated, we’d be able to have other teachers assisting and create this party-like fun yoga experience that would sweep the Wellington yoga scene by storm.

The classes were great.

The people who came week after week loved them.

But those who dropped in just to see what it was all about and boosted class numbers above 30 often never came back and the large numbers just made it much harder to teach the regulars. I was always having to teach to beginning students with a variety of injuries.

So, taking my ego out of the equation, would I still offer donation-style classes with the intention of making yoga accessible to everybody?

For the simple reason that…

Yoga is already accessible for anyone who truly wants it.

No matter how poor you are, if you truly want to do yoga, you will find a teacher who will teach you.

Or you will get a book out of the library.

Or you will find a DVD in a secondhand store for a buck.

Money, or lack of it, is no barrier to yoga.

No studio or teacher I know would say no to the homeless person who turned up wanting to learn yoga.

And offering donation-style classes ain’t going to fix that.

In fact, making the yoga classes you offer donation-style will have a detrimental affect on yoga. It makes the classes “cheap” and devalues the very thing you’re offering. People equate price with value, even though they’re often two different things.

Far better to offer extra value for ‘free’ than to cut the price. This means the value of the class is retained, while students feel like they’re getting something extra. Like offering a free workshop to any student who attends all ten classes in a term. that kind of thing.

So forget donation-style classes. They don’t make yoga any more accessible than it already is, and they risk devaluing a service that’s already devalued enough.

But don’t despair. If you really want to reach people who don’t come to yoga classes because of perceived limitations and barriers… you need to go to them.

Volunteer your time and go teach in a prison. A school. A hospital. A hospice. A women’s refuge. Keep charging for your regular classes to cover this volunteer time.

Many of these people would never dream of walking into a yoga class, which is often perceived as the domain of female, white, middle-class, fit, bendy folk. Taking yoga out of the studio and to different groups breaks through these barriers and once people get a taste of yoga…, you never know where it will take them.

That, more than anything else, will turn some of those people into the type of people who will turn up at a yoga studio or class. And isn’t that the reason that we get all super-excited about being generous and compassionate and offering donation-style classes? So people who wouldn’t do yoga start doing yoga?

Yup, if every yoga teacher out there donated a class a week to a disadvantaged group… why we’d change the world. Faster than we’re already changing it.

So forget donation-style classes, and instead donate your teaching.