You are here: Home / Yoga Articles / Deepening • The Yoga of Life / What's Real Yoga & a Real Yogi? / What if yoga is like religion? 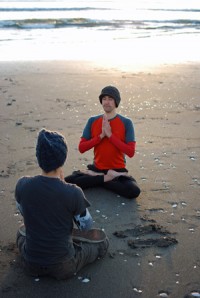 Is yoga a religion?

For years I’ve seen the fear people have around Yoga, some claiming it’s a cult or a religion and refusing to take part because they would be seen by the upholders of their own religion as hypocritical or blasphemous.  Many yoga styles and schools are based in a religion and there is even Christian yoga.  While many more styles and schools stick to their claim that yoga is an art, a philosophy, and a science, but not a religion.

The word religion originates from “re- + ligāre  to bind, tie”  which is eerily close to the origin of the word yoga which is “(Hindi, from Sanskrit yoga), union, joining.”

And cult’s origins, according to one dictionary, are “L cultus  habitation, tilling, refinement, worship, equiv. to cul-,  var. s. of colere to inhabit, till, worship + -tus  suffix of v. action.”

So what if yoga is like going to church, to service, to a ceremony of your religion?

For thousands of years people have been coerced, converted and killed in the name of religions that claim to be based on love, when really they were based in fear and guilt and pain.

Now people struggle to get to a yoga class because they know they will need to exorcise their own demons (no Deus ex Machina here) by facing themselves and developing a relationship to their own fear and guilt and pain.  But people manage to show up by reminding themselves of how good they’ll feel afterwards–they’ve experienced that “yoga high” of lightness of being and depth of connection to all that is.

It’s no wonder fundamentalists find yoga threatening—it removes the external control system and requires you to drive your own existence and to honour yourself, those around you and the wider web of the world we’re woven into.  Yoga requires you to take responsibility for yourself—from thought to word to action—to claim your “ability to respond,” while religion has so often required obedience to code and to an external authority.  Being an individual aware of how we’re all interconnected calls you to author your own life.

Let’s embrace the similarities between yoga and religion by making prayers of peace with our bodies, minds and breath.

Let’s say the word Spirit and allow it to mean being Alive and Awake in this crazy world without getting caught up in the semantics of religious rights and wrongs.

Let’s have the courage to love ourselves and one another actively, which is, as far as I can tell, what every major religion has ever asked us to do anyway.  Or as the Youngbloods sang,

If you hear the song I sing,
You must understand
You hold the key to love and fear
All in your trembling hand
Just one key unlocks them both
It’s there at your command
C’mon people now,
Smile on your brother
Ev’rybody get together
Try and love one another right now
Right now
Right now!