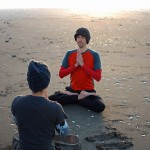 by guest author Melissa Billington, from MYOGA For years I’ve seen the fear people have around Yoga, some claiming it’s a cult or a religion and refusing to take part because they would be seen by the upholders of their own religion as hypocritical or blasphemous.  Many yoga styles and schools are based in a religion and there is even Christian yoga.  While many more styles and schools stick to their claim that yoga is an art, a philosophy, and a science, but not a religion. The word … END_OF_DOCUMENT_TOKEN_TO_BE_REPLACED