You are here: Home / Yoga Articles / Awakening • Creating a More Beautiful World / Musings from the Mat / What are Vasanas and How Do They Affect Your Yoga Practice? 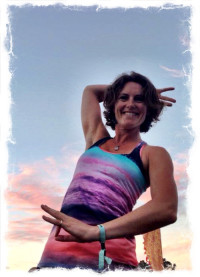 Earlier this year I took a short workshop with Duncan Peak from Power Living.

In the workshop he mentioned the term ‘vasana’, defining it as character traits or tendencies and he talked about how our practice stirs up these tendencies and brings them into consciousness.

Now I’d never heard of vasanas, and struggled to remember the term after the workshop, which happened the day before Wanderlust.

The day after Wanderlust, I was driving from Auckland back to Tauranga to pick up my son from my mum’s house. It was  stunning day, the roads were open and clear and the car was humming along.

Me? My mind was churning… it was on over-active, fast-forward, super-ambitious mode.

All I could do was keep coming up with ideas for articles to write, people to interview and steps to take in my yoga business. I was completely rajasitic (more on what that means later, and yes, I made up that variation of rajas).

At one point, halfway through mentally writing my 10th article, I caught myself and asked;

Who is this voice?

Who is this voice indeed?

And in that small act of witnessing the voice, I noticed that the feeling sense of the voice was the same as the voice I hear post-Bikram. Back in 2010 I first noticed that in savasana after Bikram class instead of my mind being all chilled out and thoughts slowed right down… I would be in an over-active, fast-forward super-ambitious mode, writing articles while lying in savasana.

This was the same voice.

I flicked back to what Duncan had said about vasaanas – about how our yoga practice stirred them up. He defined three vasanas as lust, greed and anger – I didn’t know if those were all the vasanas, or just the most common ones, or just the ones Duncan was most familiar with. Musing on the nature of the ambitious article-writing voice I wondered if this was a vasana in action.

Was my yoga practice stirring up greed or lust, which was being channeled into ambition?

Once in that ambitious space, I was getting caught up in the excitement of business and writing and world domination, mistaking the energy for pure creative energy surging through me.

Two days later, I came out of my regular Mysore-style Ashtanga class, got in my car and drove home.

My mind was still.

As it always is after Mysore…

And I noticed it. I noticed the different quality of mind – far more sattvic than rajas. There was no writing articles my head, no thinking about who to interview. Instead, I was still and present and right in my body.

Now I was even more curious.

Why did Bikram put me in such a different state of mind than Ashtanga? Ditto with post-Wanderlust, where I did four 90 minute yoga classes over the course of the day.

And what was underlying this frantic ambitious mind-churning spiel?

I needed to find out more about vasanas – what they were, how they arose, what they revealed, and how one worked with them.

I turned to the internet, foundation of all knowledge. The first fact I noticed was that there was little or no mention of vasanas on yoga websites, but rather the term showed up on Hindu websites or websites focusing more on the spiritual or God.

The most concise definiation I found was on Kamakoti, a Hindu website:

The word “vasana” is from the root vas “to dwell in”. It means that which sticks to a cloth, for instance, a smell. There is thus the “smell” of earlier births adhering to the subtle body. Vasana is the latent memory of past experience, the impression left on the mind by past actions.

It’s strange that very few yoga-orientated websites showed up in the search results.  This could just be the way that Google throws up search results, but it also points to the obscureness of the term – this despite the fact that the term shows up in Chapter 4 Verse 8 of The Yoga Sutras.

The translation in Desikachar’s book The Heart of Yoga reads:

Because the tendency of the mind to act on the basis of the five obstacles, such as misapprehension, has not been erased, they will surface in the future to produce their unpleasant consequences.

Another translation, that of in Bouanchaud, The Essence of Yoga reads:

Neither of which is that illuminating. I can sense what is being pointed out, but considering the brevity of the Sutra, there is a ton of explaining required. But that’s Sutras for you – brief yet layered, dense and rich.

The two causes of the mind are vasanas and breath. When one perishes, both perish.

Breath perishes? Does that mean we must die then?

Well, yes, and no. Reading on, it states:

A-ha! I have experienced this state in meditation – where my breath almost seems to stop, becoming so faint it’s like it’s not even happening. So too does my mind. And this is the perishing of breath and mind which leads to liberation.

If our mind is caused by vasanas, which are impressions left on the mind by past actions – mind causing mind in essence… then as our vasanas – our habitual tendencies – fade away, so too does our mind.

Practically speaking, if I feel into my state of being post-Ashtanga, my mind has stilled and slowed, I’m in a more sattvic state. This feels like liberation – or at least, a small dose.

If I feel into my mind-state after Bikram, or after a day of Wanderlust, I was all churned up. My mind was completely rajas, and my personal tendencies when I’m feeling loads of energy is to channel that energy into creative endeavours – which is writing and this website.

My vasanas, or tendencies, are that of ambition and doing and creation. Where this comes from – whether from a past life, or this life – is irrelevant. What’s important is that I notice it, because – and here’s where the danger of yoga arises – if I don’t notice what’s going on and continually fall into those patterns of thought and action, I strengthen my vasanas.

This is taking me further away from liberation.

The yoga is un-yoga-ing me. Not because there’s anything  wrong with the yoga per se, but because I’m not aware and discerning enough to respond artfully to the tendencies that are churned up through my yoga practice.

In this way, our practice reveals us to us. We learn of our tendencies – and we have a choice as to what we do with those tendencies.

I’ve long wondered how revered yoga teachers and gurus could fall so hard from grace. Wasn’t the yoga keeping them aware and growing?

Now I have an inkling of what might happen.

Yoga stirs us up – it churns the unconscious into the conscious and our latent tendencies rise to the surface. A strong practice can bring up strong tendencies – like pulling back the curtain on who we really are. It’s conceivable that those who fall from grace have been churned up, their latent tendencies have arisen so they can be witnessed and release – but instead, they were acted on.

There’s a warning in there for all of us – to both understand and respect the power of yoga. It’s not all hippy,peace out and bliss. It’s not all flexibility, backbends and Instagram selfies. Yoga is designed to wake us up – and that means bring the unconscious into the conscious. We have to make sure we know what to do with that unconscious stuff when it arrives.

Me, I’m paying close attention to my mind state post-yoga classes. I’m noticing my tendencies toward ambition. And I’m attempting to let it go, and in so doing so, weaken that vasana and move toward liberation.

But then, that’s the practice

Definitions of the Gunas (States of Being):

The gunas describe the general feeling-sense of your thoughts.

You can read more in the full article here.