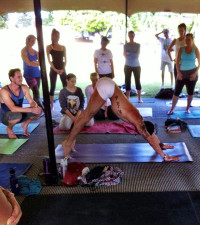 It’s the day after Wanderlust and I feel like a brand new woman.

My body is worked, in the very best possible way, and my posture feels significantly different.

It’s like decades of misalignment has finally been worked through.

It’s not unexpected – I started the day with three yoga classes back to back. That’s 4 and a half hours of intense yoga. After a two hour break where I stood and watched lithe and limber Cameron Shayne teach a martial-arts inspired flow, a finished up the yoga with Duncan Peak and Yin.

Finally, just to shake out all those hours of yoga, I hit the dance floor for a serious boogie for at least an hour or so.

Now, thanks to Wanderlust New Zealand I’m a brand new woman and feel like my spine is open and supple as never before.

And I’m sore – upper back, lower back, abs… oh yes, this body saw some work!

But that’s what Wanderlust is all about – completely immersing yourself in the experience of yoga and music and dancing.

And the crew behind Wanderlust Auckland did a stellar job – they nailed almost everything, which for a first-time festival is almost unheard of.

The venue was perfect – Western Springs, an easy 15 minute drive from downtown Auckland. I walked in around the lake through a myriad of birdlife including pukekos and pukeko chicks. The mist was rising off the water and the sky was open and clear.

It might only have been 8am on a Sunday morning, but there was a buzz in the air and a surprising number of earlybirds there to soak up the yoga.

I kicked off with Amy Ippoliti’s Back-Bending Unleashed. She promised to have us bending effortlessly back in one-legged backbends, holding our feet – and she delivered.

Amy has decades of teaching experience under her belt and an Anusara background. She understands how to use alignment to access difficult postures and she shared some real gems with us over her class, which was taught workshop-style.

Plus, despite the size of the class, Amy was down on the floor walking amongst us individually assisting and adjusting. She took time to ask us if anyone was experiencing pain or issues with a posture, and then would ask that person to go into the pose, make a minor adjustment or give a verbal cue, and voila! The pain would often disappear.

My second class was supposed to be Eoin Finn, but he didn’t make it into the country due to visa issues.

The Wanderlust organisers made the smart decision to use the advertised teachers to fill the gaps, rather than bring in an outside teacher people were expecting. I was stoked to discover that Cameron Shayne was going to teach Bring Sexy Back. I hadn’t booked in for any of his classes or interviewed him so knew nothing about him. But man am I sooooo glad Eoin didn’t show.

Cameron was a revelation. (That link goes to a TV3 interview.)

The class started innocently enough, with a chat about sexuality and yoga, and the first and second chakra. Although there’s not too many yoga classes I’ve been to where the teacher pulls out words like penis, vagina and fuck in the first five minutes. But Cameron was determined to confront our ideas about sexuality and spirituality as two separate things.

Then class began, like Amy, Cameron taught workshop style. He had a sequence in mind – more like choreography – and broke it in down in sections, teaching us posture by posture, then having us all run through it a few times before going on to the next posture. He also took time to work with individual students, getting them to demonstrate for us, and then adjusting them as necessary.

However, when Cameron went to demonstrate the first part of the sequence – an undulating spine leading from downward dog to upward dog in one smooth motion – he started to undo his fly.

Surely this man’s not taking off his clothes?!

But yes, he was. He stripped down to a pair of white boxers shorts revealing a smorgasborg of tatoos and the kind of body that melts women into a puddle of mush. Me, I grabbed my camera.

There was purpose to his flamboancy – stripped of his clothes, we could clearly see what was happening in the pelvis and the spine to create the seamless movement between postures.

Cameron’s entire sequence worked on integration of the spine and freedom of the pelvis. In between, he used liberal sexual analogies to get his point across, which had us in fits of laughter, and no doubt has improved a few sex lives as well.

Cameron’s later class, Budakon Rock-a-Thon, was more martial arts based but the tight white boxers stayed as did the atmosphere of raw sexuality. It was worth hanging out and just watching the teaching.

And that was the thing about the classes in The Mothership, which were part of the premium ticket experience, every class gathered a watching audience.

The tent didn’t have any sides – which was perfect for the weather and surrounds. We had a view of the lake and were surrounded by birdlife in the early morning class.

Once Cameron took the stage though, the birdlife was replaced by a growing audience of festival-goers who would never ever have seen yoga like it. People stood open-mouthed as Cameron demonstrated what’s possible in the human body with some serious training and love.

After Cameron, it was back to Amy, and her second class was even more illuminating than the second. We’d all warmed up, and so had she. The festival was in full swing and there was more laughter and lightness across the board. Especially as Amy demonstrated the duck-butt that would move our groins back and create space for hamstring opening.

It was this class that completely realigned my spine and helped me make sense of decades of back issues.

Another piece of the jigsaw!

After four and a half hours of classes back to back… I needed a break and some food. It was down to the food stalls to fuel up. It still took me half an hour to get there as I kept bumping into people I knew, and people I knew only from online. Finally making it to the front of Little Bird I was bummed to find out they’d sold out!


Turned out they’d under-estimated the crowd, and how hungry everyone would be. They got more food in though and disaster was averted.

By 2pm the venue was pumping – hundreds of people taking yoga class and hundreds listening to the Speakeasy presenters, plus another few hundred walking around taking in the stalls or sitting on the grass talking.

My last class was Duncan Peak’s Yin at 4pm. It clashed with Cameron Shayne on the main stage doing a dance-style class and I was torn.

Chill with yin, or dance with Cameron? I went with Yin, figuring I could dance afterward. While Duncan was awesome, in retrospect, I wish I’d gone for Cameron.

A timetable clash meant Ladi6 took the main stage right after Cameron, but while the yin class was still underway. We had pumping beats while attempting to hold the poses for four minutes.

Duncan masterfully held the space, reminding us that the essence of yoga was accepting reality as it was and working with it. So even though yin would ideally be a more meditative practice, we could still achieve the same state of yoga while the beats begged us to dance.

When I made it out of Yin and down to the mainstage, Ladi6 had finished and DJ Aroha had taken over.

The crowd had drifted to watched some high-flying acrobats doing extraordinary things high above the Lululemon stage.

Unfortunately, that drift never reversed itself – despite Aroha playing some great dance tunes as the sun set behind the stage, there was never more than about 30 or 40 people boogieing it up.

I didn’t let that stop me though, and danced hard for an hour or so before drifting over to the bar for a glass of organic wine with the husband and wife team behind Wanderlust, Jacque and Jonnie Halstead, for a debrief and celebration.

By the time I finished talking to them, the music had stopped and the bar staff were packing up the chair and tables around us.

I was officially the last person standing at Wanderlust Auckland 2014. Even Duncan, Cameron and a handful of others had left, heading into Auckland for dinner and some dancing.

It was time to go home, eat some food, take a long hot shower and do some Yoga Nidra. Despite my body being exhausted though, it was hard to sleep. Six hours of yoga had stirred all kinds of things up – it will take a week or more to integrate I suspect.

Two years ago when I pitched Jonnie the idea of bringing Wanderlust to New Zealand, I had a vision of taking classes with hundreds of people and dancing my arse off under a clear New Zealand sky.

Jonnie and his team delivered that vision and more yesterday at Wanderlust New Zealand.

They had top-notch teachers across the board, excellent vendors delivering high quality delicious food,  great stalls beautifully presented and the perfect set-up.

Plus, I never once had to queue for a toilet.

Close to four thousand people showed up over the course of the day and everyone I spoke to who ran a stall said they did amazing business.

If that’s what Jonnie’s team can do for a one-day event, I can’t wait to see what they pull off next year, when they deliver the four-day event in Taupo.

I’d be booking my ticket as soon as they go on release though… if you love yoga, and music, and great food, and community… Wanderlust New Zealand is where you need to be.

This is the only video I could find online so far, which gives you an idea of the day – although the music doesn’t quite capture the real mood of it all!

Plus you can see more photos from the day on The Yoga Lunchbox Facebook page.