You are here: Home / Yoga Articles / Teaching • The Business of Yoga / Teacher Interviews / Treading water on the void – an interview with Zoë Wild 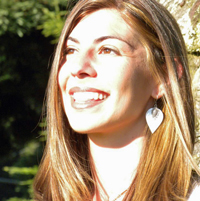 by guest author Peter Fernando, A Month of Mindfulness

This interview is part of a one hour conversation I had with Zoë, a former Buddhist nun, in April 2012. You can the rest of her insightful and heartfelt reflections on the Month of Mindfulness blog, here.

Peter: You seem to have a fluidity in terms of your relationship to spiritual forms. Looking at your path so far, there seems to be a real sense of an understanding of the transparency of forms, as well as a great respect for them. Could you say a little bit about this experience?

Zoë: I love that question. I feel very blessed, in some ways, that I was raised without religion – because that experience did leave me very open. And I’m forever indebted to Buddhism, as it was really my doorway into the the garden, so to speak.

Where Buddhist practice brought me to, through my own practice, was to a place where I saw that what I understood about reality and about myself had nothing to do with Buddhism at all!

When you take a bridge across the river, then you reach the other side – and you can look back and see that there are many other bridges, and there’s airplanes and boats as well! And so I was able to look at all these other traditions and see, ‘Oh, that’s how they’re taking people to the same place.’ Because where you’re going is beyond concepts, is beyond mind. But you start out in a mental space. We all do.

So we have to explain it to the mind, but it turns out that the explanation is about how to get there, rather than where we’re going. So when I looked back at all these different traditions, I was able to see why they were pointing people in certain ways.

So, I love to say that the Buddha and Jesus are teaching the same teaching, but I don’t know if they would have even liked each other!

But people get stuck when they get afraid. So, true faith, the faith that comes only through experience, is so important.

As long as we don’t have a connection to this, we have to prove the others wrong. There’s fear that if my belief system is wrong, then I might have to face the fact that everything is a mystery, and I have no idea of what’s going on or who I am, or how to live my life!

One of my teachers talks about ‘Treading water on the void’. [laughter]

We can really damage the people around us – we can cause a lot of pain through fear of looking at our own unknowing.

So, for me that’s part of why I became a Universal Sufi minister. It’s a way of cheating! Because the Universal Sufis are looking at the universal truths underlying all traditions. And on the altar I have, there are candles representing the major world traditions, and there is another one dedicated to ‘all those known or unknown who have held up the light of truth through the darkness of human ignorance’.

And I have the Bible, the Gita, and all these scriptures – Zoroastrian, Hindu, the Q’uran – and they’re all wrapped in gold paper, because the Sufis see them as being all different chapters of one book.

I’m personally into esoteric readings of texts, where you look for the symbolism and more hidden meanings.

However, I also think that it’s really important to commit to a path – at least for a while. Commit to one path.

I remember when I came back from Burma, to the States. And I was having these incredible physical experiences of resonating with things – like wild energetic experiences – which weren’t in my normal range of experience! And I would resonate with so many different traditions – like Christian centering prayer, and I’d walk by a mosque and I’d light on fire energetically. But I got really overwhelmed and confused by this – because I couldn’t practice everything, could I?!

So I was talking to a very wise friend of mine, and I said ‘All these different traditions are calling to me’, and she said:

And I got this image of this very big house, before cellphones– you know, when there were many phones in the house, but only one phone line! So when someone rings, you don’t have to pick up every single phone! You can just pick up one of them!

That image, that it’s ‘All the same call’ has stuck with me.

And then in hindsight we can look back and say, ‘Oh yeah, they were all pointing Here.’

I think the mystics are actually more consistent than the scientists, over time.

Zoë: Yeah. So I beg of people to have a little open-mindedness and flexibility. And you know I believe that there’s a place for everything. Even the things that are total scams. It might be what you need at a particular time – to get scammed! [laughter] If that’s what that person really needs to do…

So many of us come to spiritual openings through ‘bottoming-out’. And you know, that may be exactly what’s needed.

Zoë Wild, CPCC, is a professionally trained and certified spiritual life & business coach, workshop leader, public speaker and author. Zoë is also an ordained Sufi Interfaith Minister, has spent extended time as a Buddhist nun in Burma, and is trained as a Buddhist Chaplain.

It is her great privilege to use the wisdom she has gained from these traditions, combined with her business expertise, to guide people on their unique paths to inner peace, strength, love, happiness, prosperity and fulfillment.