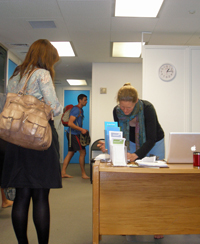 Greeting students at the front desk of Healium, a holistic health centre and yoga studio on Lambton Quay

Once you have all of these elements coming together — a specific, defined goal; clarity around the values on which the business is formed; and a commitment to that goal as a business — then the only thing that prevents a person from becoming successful is a lack of consistency.

I have a friend who set up a yoga studio, hiring other teachers and running a beautiful little business.

Things rolled along nicely for about six months.

Then, out of the blue, something got into her head. She fired everyone. She took over all the classes herself. She informed the students that she’s moving to Paris or Istanbul or Johannesburg. She then told them that she’s only taking a six-month vacation there. She then tells them that it will only be over Christmas break.

She then redesigned her web site. She redesigned her class schedule. She rehired the teachers. She started her studio “from scratch” in the new year.

The first time this happened (in my experience) about half of the students returned. It wasn’t a big studio, so this wasn’t a sustainable number. But, over time, the numbers grew again.

Six months later, my friend fired everyone for no reason, took over the classes herself, informed the students that she’s moving to Paris/Istanbul/Johannesburg, but only for six months or just for a few weeks. She redesigned her web site. She redesigned her class schedule. She tried to rehire teachers. She started from “scratch” in the summer, which isn’t an easy time to start because people go on holiday to Paris or Istanbul (well, mostly the Jersey Shore).

Anyway, things finally turned over and got close to sustainability about six months later — when she repeated the process.

The only thing she’s consistent in is her six-month freak-outs.

And to be sure, it was the fifth or sixth of these that finally led to the demise of all yoga studio incarnations run by her. She had run out of money from her divorce and her trust fund and only had her retirement left, so she retired. To the Bahamas. Where she sometimes leads yoga retreats.

She is one of the loveliest people I know. She is smart, and she is a great yoga teacher. But from the outside, to a client, well. . . just inconsistent, right?

And lots of clients — as more studios around her cropped up — just started going to those other studios. Those places were more reliable, more stable, and more consistent. And ultimately more successful.

Make no mistake, there is no direct guarantee. But if you apply these basic business principles, and approach your teaching as a business — whether it’s a leading non-profit class at a senior citizen center or running a large yoga studio with many classes and teachers — you are more likely to succeed at your goal while also fully living your values through that business.

Everything is possible with goals, clarity, values and commitment, when you apply them with consistency. 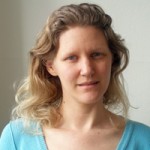 Jenifer M Parker is the owner/director of Healium, a holistic health collective, as well as a yoga teacher, Thai yoga massage practitioner, and avid meditator.

She enjoys the mindfulness practice that parenting her son Hawk brings, as well as sharing yoga and quiet meditation practices with him.