You are here: Home / Yoga Articles / Starting • The Foundations of Yoga / Reviews / Jonathan from Team Shakti on Bringing the Bed of Nails to NZ 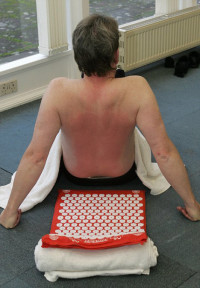 Strip off, lie down and… relax?!

Apparently one in ten Swedish people own a variation of the Shakti Mat – a modern-day rendering of the bed of nails.

Consisting of a thin foam filler inside a cotton case mounted with 6000 plus plastic spikes, the Shakti Mat is meant to “increase blood circulation and stimulate the body to release endorphins which help to bring about a deeply relaxed state.”

And now, thanks to Jonathan and his business partner, who came across the Shakti Mat on a beach in Thailand, the mats are available here in New Zealand.

Within a few months, more than 600 of them have sold, and the word is spreading.

I sat down with one of the men behind Team Shakti NZ, Jonathan Heslop to find out if the Shakti Mat is just another gimmick, or has an real benefit.

Watch the video about to hear Jonathan and Kara-Leah discuss their experience of using the Shakti Mat, and how you can buy and use one here in New Zealand.

On the Shakti Mat:

“It’s essentially a modern day version of the Indian bed of nails… It’s a foam mat with six thousand tiny spikes on it.”

On how Jonathan got involved with Shakti Mats:

“I’m new to yoga but I did some travelling last year, I went over to Thailand and South East Asia twice and on the second trip over there… we were at a little health retreat.. and we came across a guy lying on one of them on the beach, our natural response was ‘What on earth are you doing to yourself?'”

“I’m a scientific person so I was really skeptical to start out with.”

“The first few times I didn’t really like it… but the the third time I used it it was like the coin dropped and I got this wave of relaxation… I was just so sold on it.”

“Three months later we had a shipment on our way over from Sweden.”

On how he uses his Shakti Mat:

“The way we recommend people start using it is lie it on your bed, role up a thick bath mat, or even two, and place it underneath the neck of it… It should be against your skin.”

“I lie on it for twenty minutes before I go to bed.. It just puts me into really nice deep sleep.”

On the response to the Shakti Mat in New Zealand:

“Phenomenal. We’ve been constantly surprised around every corner… We had big expectations about how big it was going to be… 10% of the Swedish population owns and uses a bed of nails.”

“Its been spreading through word of mouth really well… We’ve sold six hundred now and we’re stocked in over twenty five places.”

On the hard facts and science behind Shakti Mats:

“There’s obviously a lot of anecdotal evidence but on top of that the Shakti company has done some studies and there’s also been a couple of independent studies on it and they’ve shown signs of activation of the parasympathetic nervous system… and increased circulation, boosting circulation to the area that it’s touching”

“On our website we’ve got a whole tab that is research and studies, and you’ll find all of them linked down there.”

Where you can try out a Shakti Mat for yourself:

“Our retailers are in almost every city now in New Zealand. If you go into the store… there’ll be more than happy to have you try it out there.”

“We also offer a thirty day money back guarantee. So if it’s not for you you can just send it straight back to us.”

Find out more about Shakti Mats on their website.