You are here: Home / Yoga Articles / Teaching • The Business of Yoga / Teaching Insights / How to help kids stay longer in yoga poses 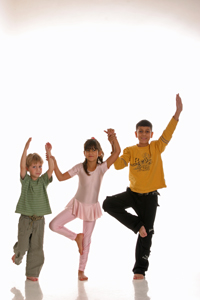 The benefits of the Yoga Poses increase as you stay longer in them.  But staying for a long time in the poses is not easy for kids simply because, for them, it is totally boring… unless you do some of the following:

You can count to 10 when you bake a Yoga Pizza (Seated Forward Bend with legs apart), when you go under a yoga tunnel with your imaginary car while in the Yoga Bridge Pose, count down to launching a Yoga Spaceship (Chair Pose with hands raised)… or you can even count really, really slowly when you are in a Yoga Tortoise.

This is simply the best for younger kids!  Try to find a song for every single pose. You can always invent songs on the spot–the kids wouldn’t know if you can’t carry a tune!

It can make the same pose be a totally different animal or object, and it definitely makes everything much more interesting, exciting, and fun!

You’ll need to stay still so they won’t fall down!

Sometimes the kids will know more about it than you, and you can all share facts and discuss it – all while you keep holding the pose!  Older kids will also be interested to hear about the amazing body they live in.

If you are in a Traveling Pose, you can tell the kids “Faster!  The _____ (place) is very far!  We’ll never get there if we keep going that slow!”  In the Sun Dance (Sun Salutation), you can say “One more time, this time double speed!”  While doing the Candle Pose (Shoulder Stand) you might want to guide them “Higher!  Try to reach the ceiling with your toes!”.

Interaction between the kids

Spice it up!  Some kids can be Yoga Tables while the others sit around them in Yoga chairs for dinner.  Yoga Flowers and buzzing bees, Yoga Down Dogs and dog owners, Yoga Animals and Zoo Keepers, Yoga Trees and Yoga Monkeys and Yoga Bananas are all great options.  Any partner yoga pose or group interaction will help the kids to do the poses for longer.  It’s always more fun to do yoga together!

Depending on each other

You can practice relaxation with each kid resting their head on the belly of the person before them (we call it Anaconda Snake Relaxation), or try having some of the kids go under a tunnel made out of Down Dog Poses or crawl under any other pose.  If a kid moves out of the pose, they will destroy it for everyone; it’s a great way to learn how interdependent we are.

You can pass a ball from one to another while staying standing in Yoga Tree or in any other pose, slide a ball down all the Yoga Slides (Incline Plane Pose), hold an umbrella while in the Dancer Pose, wear a crown and hold a wand while in the Yoga Prince or Princess (Chair Pose), put a table cloth (can be a yoga mat) or plastic plates and cups on a Yoga Table, or be covered by a blanket during relaxation… This little flare makes the pose much more engaging!

The kids love it!  Go around and pat all the Yoga Dogs or Yoga Bunnies and tell them how cute they are, or that they are a good dog.   The kids are sure to stay still in the pose waiting for their turn to be patted.

You can do it with an imaginary camera, or a real one.  The kids need to stay still in the poses for you to take a good picture!

Making it varied and interesting

Lighting all the Yoga Candles and blowing them out, watering Yoga Flowers or Yoga Seeds (Child Pose) that will slowly grow into trees, checking how steady the Yoga Mountains are by gently pushing them to test their stability, fixing Yoga Tables and Chairs, riding Yoga Bicycles upside down in the Shoulder Stand and then continuing to walk and run and surf and snowboard and rollerblade, and skateboard a jump and hop and skip all on the ceiling or sky! …and all while staying in the Shoulder Stand!

Start in Yoga Tree, for example, and then have an eagle in the tree (or a butterfly, owl, or even an elephant) just by changing your hand positions… and all the while staying steady in the Tree Pose!  In the same way you can have not just a Warrior 1 and 2 and 3, but also warrior 4 and 5 and even 10… all while you keep holding the same basic pose.

Make up, or let the kids make up, a Yoga Story and have the kids stay in a certain pose until the next Yoga Animal or Yoga Object come up in the story.  If the story is interesting enough, it will motivate the kids to stay in the pose.  You can even make a rule that the storyteller can only tell his or her story while everyone is in a pose.

With or without music that you pause, freeze for as long as you can in different poses.  You can call out names of specific poses, or let the kids choose poses one at a time by calling out their names, or give more general instructions like “Freeze in a pose that will make you stand on one leg” or “Freeze in your favorite pose.”

You can also play the freeze game in a more creative way by turning the kids’ “switches” on and off, or pressing on their “buttons.”  When the “switch” is on the kids can move all around the classroom in any way they want, but when you turn them off they have to freeze in a yoga pose.  They can’t move until you switch them back on.

Another way to play is to be a Yoga Wizard who turns the kids into Yoga Animals or Yoga Statues where they will be frozen forever! Ha Ha Ha Ha Ha Ha (evil laugh)!

The real point here is that you must make it interesting if you want the kids to stay in the poses…or even do them at all.  If your class is boring, the yoga class simply won’t happen.  Either the kids will not come to the class, if they have the choice, and there won’t be a class; or they will disturb your class, and you won’t be able to teach.  Be smart – be FUN!

Good luck! And Rainbow Kids Yoga is always here for you if you need some more ideas on how to be the most fun, super popular and coolest kid yoga teacher in the universe!

Interested in learning more about how to teach yoga to children?

Gopala has been teaching Yoga for children and adults, as well as meditation and Yoga philosophy, since 1995. He was a monk in the Sivananda Yoga Centers in Israel and the Bahamas for ten years, from 1994-2004.

In 2007, Gopala founded the studio Yoga LeShalom (Hebrew for “Yoga for Peace”) in Tel Aviv, Gopala’s hometown. Yoga LeShalom is a studio for the whole family, where the daily schedule included Drop-in Yoga classes for adults, Yoga for kids, Ma and Baby, and Family Yoga.

That same year, Gopala began focusing on training Yoga teachers for kids, and Rainbow Kids Yoga was born! Seeing the need to bring all of this fun to adults as well, Gopala founded Sun Moon Partner Yoga in 2009, to train Partner Yoga teachers and to enrich the Yoga world with his concept of Community Yoga.

In 2010, Gopala created our unique 200 Hour Teacher Training, focusing on Family and Community Yoga, and is the director and head teacher trainer. Today, Gopala keeps training Yoga teachers and directing family Yoga holidays worldwide, while writing books and traveling with Angel, his partner, and their three children, Emily, Oliver and Delphin. His playful, patient and warm teaching style has been applauded by graduates as “magical”, “inspiring”, “transformative”, and “an unforgettable journey.”