You are here: Home / Yoga Articles / Deepening • The Yoga of Life / What's Real Yoga & a Real Yogi? / The Benefits of Yoga: Are They Proven By Science? 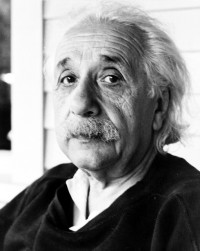 Einstein was totally a yogi.

The benefits of yoga are well advertised.

But does science agree that yoga can really heal us in all these ways (and more)? Is Yoga really the silver bullet we’ve been waiting for?

It turns out that yoga and science aren’t always in agreement about the benefits of yoga. This has some interesting repercussions for how we understand the relationship between science and yoga, and the role that ‘science’ has to play in our lives.

My interest in this relationship started in the midst of an argument with my boyfriend about alternative healthcare. I hadn’t responded well to a comment of his that implied all my digestive ails could be cured with a healthy dose of traditional Chinese medicine, and this morphed into a disagreement on the effectiveness of alternative medicine.

Upon consulting Wikipedia I was surprised to find the following definition:

Alternative medicine is any practice that is put forward as having the healing effects of medicine, but is not founded on evidence gathered using the scientific method.

To my horror this included ‘energy medicine’ and ‘mind-body interventions’ like yoga and meditation.

This was followed with:

Implying that, because alternative medicine (and yoga) is not proved by science, it doesn’t work. Period. Ouch.

As a woman who gets out of bed in the morning, rolls out her yoga mat, and begins her day with somewhere between twenty and ninety minutes of yoga and meditation (and has done so for the last five years) I know for myself that yoga has helped heal me, and that the above definition is so overly simplistic it’s not even funny.

I know that yoga ‘works’ because it has worked for me. It’s helped me heal from a long term eating disorder, among other things.

But is it true, as this Wikipedia article claimed, that science disagrees about the effectiveness of yoga? I set off it find out. But first I had to ask: What is science anyway?

Instead of worshiping God, or various spirits and deities, a lot of us now place our  faith in ‘science’ to be all-knowing and unfailingly right. But is it?

Not so. In fact science can often be biased, heavily influenced by corporate interests, and, by it’s very nature, it is constantly evolving and changing.

Of course there’s good science and there’s bad science. But even the good kind of science can’t understand everything. Think science has the vast intricacies and mysteries of the universe down pat? No way. And the mysteries of our internal selves, our souls, our wounds, our joy? Nope. It hasn’t figured that all out either.

My curiosity about the relationship between yoga and science led me to William Broad’s book The Science of Yoga: The Risks and Rewards.

The information in the book surprised me in many ways, and I finished it with a strong sense of how ‘good science’ (independent, rigorous, thorough, and non-biased) understands yoga.

Broad’s research contradicted some of the key benefits that people claim yoga offers:

However it also confirmed many others:

What this shows me is that the deeper benefits of yoga, the ones that I’ve found the most valuable and needed in my life, are generally the ones that do seem to have scientific backing.

And with $82 billion worldwide sales of ‘mental health’ drugs maybe it is really the emotional and mental support that we need the most from yoga. Much more than we need flat abs or a fast metabolism.

So although alternative and ‘natural’ therapies like yoga are derided by the establishment (and Wikipedia) for being unscientific I’ve learnt that this a) isn’t true and b) fails to acknowledge the limitations of science to ‘prove’ something as being true or false.

Because. I’ll say it again, science really doesn’t know it all. Even ‘scientific’ traditional medicine has some serious flaws.

At the end of the day science matters to me. The good kind of science that is. I try to engage with it often, and to be both open and critical of what it has to tell me.

But blind faith in science is something I try to steer clear of. Of course scientific research is incredibly valuable, has saved millions of lives, been responsible for incredible innovations, changed the world etc etc. But relying solely on science to understand what’s going on inside your own body and mind seems weak to me, not only because science isn’t always ‘right’, but because this approach discounts your own experience and knowing.

I often feel overwhelmed by how many opinions there are about the ‘right’ way to do things. The internet has democratized information, generally a fantastic thing, but that, along with the rise of aggressive and targeted advertising and marketing (which informs us of the right way to eat, dress, look and live) leaves me open to millions of perspectives on how I should be. And many of them are compelling.

What I like about my yoga practice is it allows me to be like a scientist in my own body, experimenting with my breath, my body, and my emotional and mental state.

My yoga practice, and the insight it gives me into my physical, mental, emotional, and spiritual self can then be used as a compass to guide myself through this noisy, confusing world of many choices. And good science is the perfect compliment to that.

Because there are some things I can’t know, or am unlikely to pick up, through my own subjective inquiry.

I’m a small, biased human being (as we all are really). The fact that certain yoga poses can cause strokes, for example, is something I would have been very unlikely to discover on my own, so in this case I’m truly grateful to know about the research done in the area.

I’m grateful too for the research that enumerates the proven benefits of yoga, benefits I might have had a hunch about but haven’t had the opportunity to study in depth. These studies are in-depth, and show that yoga does in fact improve sleep quality, modulate the stress response and improve mood, improve your sex life, and help treat osteoporosis.

And of course I’m grateful to Wikipedia for igniting enough outrage to send me on this inquiry. My university professors always told me never to use Wikipedia. They were wrong. I find it to be a great springboard into deeper research (provided that you take it with a least a teaspoon of salt)