You are here: Home / Yoga Articles / Starting • The Foundations of Yoga / Home Yoga Practice / The Benefits of Practicing Yoga While Watching TV 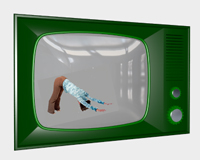 There’s benefits to practicing yoga in front of the TV

By Kara-Leah Grant, author of Forty Days of Yoga

During class on Wednesday, as we moved from posture to posture, I drew my students attention to the way they were beginning to intuitively move their bodies in counterposes and releases after a more intense posture.

They weren’t thinking about it, it was just happening as their body moved spontaneously and they followed along.

One of my students looked up and exclaimed:

One benefit of practicing yoga while watching TV is that the conscious mind is engaged in watching the TV show and the unconscious mind begins to move and direct the body according to what’s needed.

Practicing yoga while watching TV allows us to experience spontaneous movement arising within, and we learn to trust that movement. We realise we do know what to do next in our practice.

This is a big thing.

One of the major obstacles to a daily home practice is the idea that we don’t know what to do. We get all caught up in our mind worrying about which posture comes next and if we’re doing it right and what happens now that we’re not able to relax into our practice.

TV solves this problem. It gives the conscious mind something else to focus on so we can let go of all that worry.

Once we let go and surrender into the moment, TV and all, our practice can naturally arise from the unconscious mind, which does know what to do.

After class, we discussed this more. My student said her yoga mat now lives in her lounge, rather than being tucked away in the bedroom. She also said she’s practicing every day, in front of the TV.

But isn’t it bad to practice yoga in front of the TV? she asked.

No – it’s not. We’re moving beyond good/bad here and instead looking at results. Yes, practicing yoga in front of the TV will have different results from practicing without a distraction – but it’s different, not necessarily good or bad. Forget about those comparisons, that’s just another trick of the mind. It’s only the mind that can hold up two things and compare them against each other to determine which is “better”.

Instead of good/bad and comparisons, focus on results.

As a result of practicing yoga in front of the TV, this student has

Those are some fantastic results. It’s well worth getting out your mat and practicing yoga in front of the TV if that’s going to happen.

But the other interesting thing that she noted was that sometimes she gets so into her yoga she switches off the TV.

She doesn’t turn it off because it’s bad. Or because she’s been told to.

She turns it off because of a natural desire arising within to practice without the TV on.

This is our natural evolution.

We start our practice where we are, as we are, using what’s in front of us.

Over time, the desire to practice becomes stronger and stronger and we willingly carve out more dedicated time in our lives.

That’s what’s revolutionised my yoga practice recently – a natural desire arose to practice at 6am.

This is the magic of Forty Days of Yoga. It’s about being you as you are and finding the yoga there. From there, we trust that the yoga will evolve at it’s own pace.

So next time you’re watching TV, get down on the floor and take yourself through some floor postures. Even just sitting on the ground in easy pose while you’re watching the box is a great start. You could easily get in half an hour of yoga and not even notice.

Let me know how you get on.