by Kara-Leah Grant She's sometimes referred to as "the Madonna of Yoga" - at least, that's what Vanity Fair called Shiva Rea when she did a desert photo shoot for them in 2007. But magazines love catchy monikers and as someone who grew up idolising Madonna and has studied with Shiva... the two women are nothing alike. "I'm not sure what exactly what they were referring to, whether it was my boldness, but I'm not into being a yoga celebrity at all. At all! Humility for me is a really important … END_OF_DOCUMENT_TOKEN_TO_BE_REPLACED 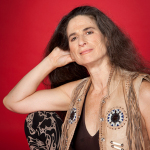 by Kara-Leah Grant Meet Ana Forrest. Ana is the creatrix of Forrest Yoga, an internationally renowned yoga teacher and medicine woman, and the author of Fierce Medicine. She's also headlining Wanderlust NZ 2015. Ana's approach to yoga could be summed up in this quote from her: "If you want to use yoga to heal emotional pain, you must find out where it resides in your body and learn to take your breath there. I don't teach yoga to help people to transcend. I want people's Spirits to … END_OF_DOCUMENT_TOKEN_TO_BE_REPLACED