You are here: Home / Yoga Articles / Awakening • Creating a More Beautiful World / Musings from the Mat / So that’s what Brahmacharya is all about. Containing my Inner Vamp 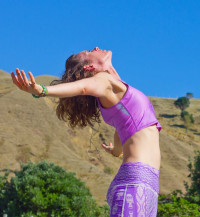 Learning to stand my ground and contain my energy, opening only on my terms.

This New Year’s Eve was a watershed for me. For the first time in my life, I tamed the wild demon of my sexuality. Never have I felt more powerful or more in integrity, and that sense of power and integrity has since spun out, infusing every element of my being.

I was at a five day festival and in the company of an extraordinarily sexy man. The connection between us was humming and thick and a mere sideways glance was enough to bring on dry mouth and heart palpitations. And the connection was mutual. We danced up a storm under the starry sky, flirting outrageously and playful engaging in every saucy dance way possible.

Later, under an almost-full moon high up on the lookout beyond the sounds of the festival, the smouldering fire of our connection threatened to combust.

There was plenty of opportunity to ride this desire all the way to the stars.

Or rather, I thrust a huge stake in the ground and said;

“This is what I want and I don’t want anything less.”

Because I knew that while we had this incredible, explosive, ‘holy-fuck this man could take me places’ connection, I wanted more from him. I wanted the whole shebang – the mind-mingling of sixth chakra, the heart-melding of fourth chakra and the sacred sexuality of second chakra. It was clear to me that we had potential for all three connections to active, but that hadn’t happened yet.

So I made myself clear.

I was happy to flirt outrageously and ride the energy wave, but until the mind-mingling and heart-melding happened, that’s as far as I would go. I only wanted to experience the sacred sexuality from that foundation.

Never, ever in my life have I been so forthright and so bold.

Usually I take what’s on offer for fear I won’t get what I want and because I’ve always been totally addicted to the high of playful, crazy sexuality. Add to that a strong streak of people pleasing and you’ve got a recipe for sexual disaster. I’ve slept with several men I didn’t really want to sleep with simply because I want to please them, make them happy, or get something from them.

That never ends well, for either me or the man.

There was the millionaire businessman whose mind  and energy I admired.

I loved hanging out with him – not only was he a smart conversationalist but he was a window to another world and I loved hearing his insight and stories. One night, out on the town, he kissed me. I was about to say ‘he kisses me out of the blue’, but it wasn’t really. I’d suspected that’s where his interest was heading yet I didn’t know how to be clear about what my interest was without losing him as a friend. Plus I doubted myself.

“Hey, here’s this intelligent, successful man who is interested in me… maybe there’s something wrong with me because I’m not sexually attracted to him. Maybe I could be if I tried hard enough, or if I was drunk enough.”

And that’s what I did.

Instead of setting a clear boundary the moment he kissed me, I made the decision to have a few more drinks and see if that made me feel more attracted to him… and then I slept with him.

Because, you know, that’s what smart, intelligent women do. Sleep with men they’re not interested in to keep their friendship.

Afterwards – he’d dressed and left and I was curled up on my side in my bed – I felt the most intense wave of shame moving in ever-widening circles out from my lower belly. Never had I felt shame before in my life – at least that I was consciously aware of.

And as I lay there, knowing I had made a shocking sexual decision and feeling the intense shame of it, I had to wonder – all those years in my 20s, sleeping with all those men (and a handful of women) – was I feeling shame and I never knew it?

And believe me, there were plenty of moments to feel shame.

Like that time I got stupidly drunk and after the bar closed, ended up back at a casual friend’s house with his brother, a friend and his girlfriend. There was more alcohol on offer, and I said yes to more drinks, yes to getting in the hot tub, and yes to feeling the girlfriend’s fake implants.

I can’t remember what I said yes to after that because I blacked out – as I used to do in those days when I consumed too much alcohol.

All I experienced after that was flashes of the evening and from what I can gather in those flashes, it descended into some kind of group sex experience and I had sex with all three men.

Yet the next morning, waking up in bed with my friend the standout moment – aside from the fact that my underwear was MIA and a thorough search of the premises turned up nada – was my friend’s shame and embarrassment. He was a good guy, and I suspect he too was drunk and railroaded by his brother and brother’s friend.

As for me, I walked around in a daze that day, unsure of what I was feeling, or how I should be feeling.

Because it didn’t. It felt disorientating, and numbing and maybe even just plain awful but I didn’t dwell too much on that possibility because plain awful sat at the stop of a steep and slippery slope high above a grave sign that flashed

‘Here lies the innocence of KL, murdered after she was plied with alcohol and taken advantage of…”

That story didn’t fit my narrative though, so I rejected it. I was a strong, powerful, sexually liberated woman who chose to have such exciting, fun and wild experiences. And damned if I wasn’t going to believe my narrative, despite all evidence to the contrary.

Post-sex with the businessman, the illusion of that story collapsed. I was actually a people-pleaser with poor boundaries, addicted to the highs of sexual attractiveness and with a strong sex drive.

And that, my friends, is a recipe for disaster. But I won’t bore you with more stories of my sexual disasters.

Suffice to say that post-businessman I never made that mistake again. The only sex I had was with men I was attracted to and I was always sober.

But I still had poor boundaries and now the flip-side of my narrative revealed itself.

I met a man who seemed interested in having a relationship with me. We spent a decent amount of time together and spoke about what we were both looking for in relationship. Yet I could’t tell if he was really interested in me in that way or not. His messages seemed mixed and I was confused.

However, on a date, at his friend’s wedding, he kissed me and I kissed him back, pleasantly surprised at the sexual spark between us because it hadn’t been evident until the point of contact. This meant he was interested in a relationship, right?

From my perspective it looked like we were going into relationship so the following weekend, I joined him at his place for a couple of days.

The night I arrived, he was back to confusing mixed messages. However, I ignored those mixed messages, because my sexual vamp was amping to get some playtime in now that I knew we were both looking for the same thing.

I jumped into bed with him, thinking we were heading up the mountain of relationship, when really, he was just looking to mosey around the low-lying meadows at the bottom picking flowers if he could.

It all ended in tears. My expectations of relationship dashed when I realised he wasn’t prepared to get emotionally involved and was more interested in just taking what was on offer.

Once again, I had compromised myself because I’d let my sexuality take the lead.

I drove home feeling broken-hearted. We’d only hung out for a few weeks, but once my heart’s engaged, it’s engaged. Sleeping with a man I’m heart-open with seems to active a powerful connection and then to realise he’s not on the same page… wham bam fuck you mam.

It was an ego-sucker punch because I was conscious enough to be aware of my folly and foolish enough to think I wasn’t that stupid anymore.

But the stupidity combined with the consciousness meant I was able to clearly see my patterns for the first time. And awareness is the first step in making changes.

Standing on the lookout high above the party bathed in the almost-full moon and the radiating sexual energy between this beautiful man and I it was clear what I had to do.

I couldn’t give in to the pleading of my vamp because I knew it could break my heart. I didn’t just want to sleep with this man, I wanted to partner with him. And for once, I was willing to let go of the explosive fun I knew we could have to protect my heart and stay in integrity.

We stood, forehead to forehead, nose to nose, breathing the same breath, hearts pressed against each other, finger to finger tip, groin to groin, toes touching, drinking in the presence of each other’s being and feeling the fullness of the moment as we gazed into each other’s eyes and I said yes to this – yes to the intimacy and connection and openness and presence of being.

But before we bring our bodies and beings together in oneness, all three connection chakras have to be activated. As I spoke, I lightly touched each chakra-space in the no-gap between us. Ajna. Anahata. And Svadisthana.

Ok, so I didn’t name them in Sanskrit because my pronunciation sucks and I would’ve have tripped over the words and ruined the moment.

But I named them. And in doing so, I named both my desires and my boundary in one go.

This is what I want.

This is what I desire.

And I’m not going to take anything less.

Im no longer afraid of not getting what I want.

I know that if this man is the right man for me, then he will meet me there. If’s he not, another will. I can wait. And my sexual vamp can wait. She’s had her crazy, wild time of liberated freedom. At least, she thought she did. It’s time she learns what real freedom is and what is really means to be a sexually liberated, contained woman. (Hello brahmacharya – so that’s what you’re all about!)

Because I know that when my boundary is finally met, the sexual vamp will have the safe playground she always craved to fully express the deepest of her desires from a swirling vortex of mind, heart and sexuality.

And that is worth standing my ground for.

I am worth standing my ground for.