You are here: Home / ARCHIVE / Energetic Practices / Chakra One & Two: Feeling secure and letting go, the essence of Hanumanasana 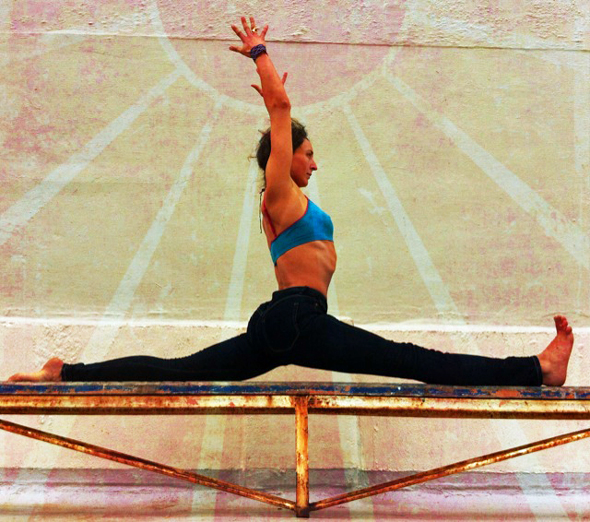 
Hanumanasana, often called the splits, is the extraordinary experience of moving in two opposing directions at the same time, without falling apart, or holding the breath, or injuring ourselves.

In practicing this great leap of Hanuman, we learn to engage actively and consciously, while releasing actively, consciously and bravely.  AT THE SAME TIME!

Which brings me into two chakras – Muladhara, root support and Svadisthana, one’s own sweetness or abode/home.

These two nest within one another.  They are physically very close together, as well as energetically inter-dependent.

Muladhara, first chakra, is our right to exist.

Let’s backtrack to the last article in the Ear2Earth series on Sahasrara, the seventh chakra. Located at the crown of the head, it seems so far away from this base existential foundation in Muladhara, located at the coccyx (tailbone).

They mirror each other, though in a psychedelic way. Through Muladhara we connect to our ancestors, the roots of our own being, rooted in our family tree.  Out of the many arises the One.

Through Sahasrara, we connect to our progeny and far-flung descendants, and we connect beyond our literal family in linear time to the family of all life in simultaneous time.

Out of the one, arises the many, which is the One.

Sahasrara is often translated as thousand-fold, meaning the lotus of (at least) a thousand petals, yet the samadhi  experiences here of bliss beyond words, beyond description, are usually of an ecstatic experience of oneness with all-that-is.

We visualize a thousand petals or more and yet experience unity – no separation between “petals”.

Muladhara is not only at the base of our energetic system, but also generally considered base in its energy.

Yet its paltry four petals all relate to types of bliss.  Most consider the Kundalini potential of uncoiling, spiraling up, and expanding out, to lie latent here at the base of the energetic body.  So contacting the earth and feeling secure in our right to be here, to be part of this unfolding life in this vehicle we call the body, Is Bliss.

Which brings me to a poem I wrote recently:

your love of the earth.

to be thrilled—no, in love with

feeling its way around

in a vulnerable dance of un-do.

Despite the bliss of connecting to our roots through our body, culturally we have made the body dirty.

We have made ‘letting go’ a bad thing, or at least an embarrassing thing worthy of childish names like poo, potty, number two.

Let’s let go of the crap and recognize our shit for what it’s worth – what no longer serves us internally, but enables all sorts of things to grow if we let it go/drop it.

My father died of rectal/anal cancer. After a lifetime of holding on to stories that kept him stuck in the past, he was incapable of letting go of the shitty experiences in his life until his body forced him to. Instead of using them as manure to grow himSelf, he was literally eaten alive by his own shit.

In the last article I recommended pranayam as an effective and quick means of connecting to spirit. Prana comes in on the in-breath, especially when done consciously.

At the other end, Apana goes out when we stimulate below the diaphragm – all the digestive and excretory organs release what is no longer nutritive and what no longer serves.

Regulating your release of shit (for example, with Malasana, or squat, which translates as “shitting pose,” a posture Westerners tend to struggle with), is my recommendation for connecting to earth, the base from which we rise to heaven. Apana descends through Muladhara.

How much are you holding onto that could be re-leased – physically, energetically, metaphorically – in your life?

How much as humans on this planet could we do the same spring cleaning?

What do we no longer need that we cling to?

Muladhara is our root support, our foundation. It’s our feet, legs and tailbone, our physical roots. It’s how we ‘stand up for ourselves.’

Imbalanced, we hold tight to, and over-emphasize, material security and tend to be anal-retentive.

How does this relate to our second chakra, Svadisthana?

It translates to mean “one’s own sweetness or abode” which makes me think of a coconut. So much water and sweetness inside that hard shell AND all the information for it to sprout out from itself, to drop roots down and shoot shoots up and create itself anew.

Muladhara may be Chakra #1 (where our number 2’s drop from!), but it’s from Chakra #2 that our roots originate. It’s here in the pelvis, hips and sex-organs that we crack open and begin to contact the world through our downward-grounding roots and our upward-reaching stem (Manipura, the power house at the navel, our third chakra).

Sex and security are hand in glove, which we know don’t we? Muladhara and Svadisthana nestle into each other.

When we feel secure in ourselves – grounded in a sense of where we come from, how we feel now and where we’d like to go – we can let go so much more ecstatically. We can merge with the identity of another. We can marry in sexual union.

I see Svadisthana’s imbalance in traffic jams and the yoga community.

In the first instance, humans struggle to merge. Unless it’s an accident, most traffic is caused by an inability to “merge like a zip” in a seamless, non-egoic way. It’s absurd to see how determinedly humans speed ahead in their cars with an energy verging on anger, only to have to merge somewhere down the line and possibly, possibly arrive at their destination a full two minutes ahead of you.

Why, oh why, are we competing with each other? Are we not the same species?

Do we not realize that likely our only chance of survival (Muladhara) on planet earth (Muladhara) is to work together (Svadisthana)?

I’ve had a vision for 10+ years now of, essentially, a wellness mall called Powa Centre.  It’s an eco-community, a fractal of human life on earth in its full embodiment of all seven human energy centres: foundation, sensuality, empowerment, compassion, communication, vision & unity.

I know it will happen – visions like these are beyond my small mind and come from that greater pool of possibility we are all part of – yet my individual personality has been frustrated with the traffic jam of humanity incapable of merging smoothly.

So each yoga teacher/school has to establish itself, its brand, its difference, before it can even consider sharing a roof.

In the US, Europe, even Australia, yoga has been around longer and become more of an industry. There are centres like Kripalu, Omega, Esalen where all styles converge and share their practices.

All those strands, those sutras or threads, weave back in time to a shared yogic well or re-source, just like most humans have feet, legs and tailbones. Yet, each thread is a different color, a variable expression of that source we call yoga.

Svaroopa is so different from Bikram, yet they share a root system.

If we want to merge without losing ourselves, we must individuate first  – we must establish what our own sweetness, our own abode is, first.

I’ve recently taken an activist stance on sexuality, particularly the right to freely express oneself as a woman.

In a creative (Svadisthana) gesture of expressing this through photos of my own body bared and through words, I wrote:

“Pornography is when we take inherent beauty and make it dirty. There is nothing dirty in the human body but what we throw on it.

As a woman of this world, of the earth, I crave to feel safe in my skin – to not feel that my fellow man is my predator. Heaven knows we’ve killed or caged most or all of our natural predators and yet we still don’t feel safe – particularly as women.

Men – take care of us. Love us and help us be true and naked in front of you without fear you will hurt us. This is my plea.”

“Are you Man enough to stop Violence towards Women?”

I’m aware of Eve Ensler’s One Billion Rising, a hair-tingling reality-check on humanity’s widespread imbalance in Muladhara and Svadisthana.

This is a microcosmic picture of how we treat woman/mother/female as a species.

Look at the state of our planet, forever called Mother Earth, and thought to be feminine, receptive and life-giving by most cultures and peoples.

We’ve cut into it, burned it, denuded it, moved it around as we please.

My native origins weep at this. Algonquin people walked on the earth as though its surface were a living mother, meaning with care, tenderness and respect.

Some might snort with derision at the thought. What a waste of time, I can imagine you saying. From the perspective of people who have no word for time, that statement is equally as absurd.

By not being respectful of our elders in the past, the indigenous people who lived “uncivilized” for thousands and thousands of years with the world, and not respecting the the present reality of our world as we’ve denuded, burned and cut into it, we may have sacrificed our right to an easy future here.

As Anodea Judith says in her book, Waking the Global Heart, Humanity’s Rite of Passage from the Love of Power to the Power of Love, until we fall in love with the world again, we endanger our place in it.

Which brings us back to Svadisthana – sexiness, creativity, and the feeling flow of one’s own home or sweetness.

When human women feel safe to dance, to bare their breasts, and to feel openly, we will also revere the natural world and want to protect it and care for it, as though we were in love with life and with living.

We will be more capable of holding safely and of opening wide at the same time.

We will be capable of Hanumanasana, of bridging worlds in order to heal them.

Our hips, as one yoga teacher calls them, are the junk drawer of the body.

When we take this season of spring and clear out the cobwebs, dump the shit, and allow space within ourselves by eliminating the clutter, the structures then become more clear.

We can see the foundation that supports us, the walls and ceiling that protect us, and light can then enter more freely.

When we practice our yoga – our union with all that is – we can more clearly see and clear the clutter.

As we grow stronger in our ability to simultaneously open and support ourselves, we develop an ability to align instead of a determination to reach a finished alignment.

We can step out of the studio and practice our yoga any-and-every-where by being both sensitive to the flow of the changing moment as well as the support system for our individual place in it.

We realize the process is the practice and the posture is the vehicle or crucible for the process.

We merge with our Yoga, falling in love again with the world, and with ourSelves.