You are here: Home / Yoga Articles / Awakening • Creating a More Beautiful World / Musings from the Mat / Why Letting Go is a Crucial Aspect of Loving Well 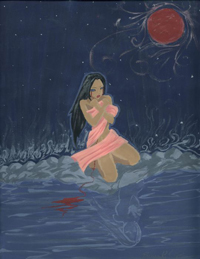 It’s the summer of 2000 and I’ve just come back to Whistler, BC after nine weeks living on the side of a volcano in Maui.

I’d been on a mad adventure with a man I’d meet waitressing that winter in Whistler – but that’s another story.

My life is packed full of stories from that time, many of them involving men. I was young, carefree and a permanent traveller. It was four years since I’d graduated my Journalism Course and bailed on New Zealand, looking for fame, fortunate, freedom and adventure.

This particular night, I’d gone into The Longhorn Saloon, where I worked as a waitress – best gig in town – to pick up my pay cheque.

In winter, that pay cheque didn’t matter too much because we’d hit individual sales of $3000 in an eight hour shift, and make an average of $100 – $300 in tips per shift. Summer was different. The Longhorn Saloon was an apres ski bar, and despite it’s massive patio and hordes of people drinking corona in the sun, we waitresses only averaged about $50 – $150 per shift in summer. The $200 a week we made in wages counted in the summer time.

So there I am, picking up my wages, it’s a mid-summer’s late afternoon, and I spy a good friend of mine at the pool table, drinking with a buddy of his.

This good friend – lets call him Gerald – is a fellow Leo, born the day after me, and he’s got a heart of gold. I have a lot of fondness for him. He’s also one of the biggest coke dealers in town, which is somewhat perplexing.

Once, bemoaning the fact that his cell phone was full of messages and he couldn’t empty them without listening to each and every one… I offered to do it for him. Ever listen to a coke dealer’s phone messages?  Person after person after person demanding service instantly – talk about job pressure. Gerald was no pusher, he was pulled to pillar and post all over town by the demands of his clients. That’s another story too.

I join Gerald and his friend, who I don’t know, at the pool table. Pool is one of my favourite ways to spend time in a bar and I’m confident I can win. I probably do, but I have no recollection what-so-ever of playing pool. What I do remember is when Mike – that’s Gerald’s friend I hadn’t met before, and yes, that’s his real name – mentioned he’d been in advertising back in Melbourne.

My writing career felt like it was going no-where fast – witness why I was in the bar, picking up a waitressing cheque.

Advertising sounded so grown-up and glamorous and hey, don’t they need copywriters?

Suddenly, Mike got a whole lot more interesting. Of course, he was already interesting. An Australian with a city accent, he was good-looking, had a confident physicality and the ease and charm of a Libran. As the afternoon bleed into night, and trips to the downstairs bathroom increased, he was looking more and more interesting.

Somehow, at some point, Mike and I decided to de-camp to my place, after making a purchase from Gerald and hitting up the local liquor store for pre-mixed Black Russians – which was what we’d been drinking all night.

We headed out to Alpine – cab or bus? Can’t remember. Wouldn’t have been a car though. Those were few and far between in the circles I moved in – no need in Whistler where you could walk the length of the valley in a couple of hours and the bus service ran every 7 minutes.

I was house-sitting a one -bedroom apartment that belonged to another waitress at the Longhorn. She’d gone off to LA for nine weeks to do her Bikram Teacher Training – the first time I’d ever heard of Bikram. Tania would go on to be my first, and still one of my favourite, Bikram teachers.

Mike and I set up in her lounge, drinking and doing rails and talking and talking. And talking. It wasn’t just the coke though – it was the connection between us. He was intelligent and easy-going and interesting and interested in me and we had so much to say to each other

Then we went to bed.

For about three days.

The only reason we finally got out of bed was because I had to get dressed and catch a plane to Las Vegas where I was celebrating my 25th birthday with three girlfriends from Whistler.

And yes… that’s another story.

I came back, and Mike was still in my bed. At least, he might have been. He might have gone home for the four days I was in Vegas – I don’t remember. But it felt like he was still there. And we took up where we left off.

This was Love, with a capital L. And the first Love with a Capital L I’d experienced since falling in Love with my first boyfriend in my last year of high school. We’re talking five or six years. I was in heaven, over the moon, giddy, on cloud nine, dancing to work, and loving it.

And Mike mostly stayed at my place.

We talked and laughed and made love and relished the fact we had this beautiful little one-bedroom all to ourselves – a rare thing in a ski-town with a chronic housing-shortage.

A black cloud washes over it and his eyes shut down.

The honeymoon bubble we’ve been in pops and suddenly he’s making excuses to leave. He’s gone and out the door before I can say anything more, heading into town. Day has suddenly turned into night and I feel like I’ve just had a limb amputated.

The easy intimacy we’ve been sharing, the complete melding of Selves has been shattered.

My reaction to this moment is to define the rest of our relationship, which goes on to last two and a half years.

But it will always have a weak foundation because of what I do.

This moment, my reaction, creates the seed for the ending.

My light-hearted reference to threesomes has triggered something in Mike – it’s brought up his insecurities. He’s wisely left because intuitively he knows he needs to work through this. However, I’m so attached to the romantic bubble we’ve been floating around in – something that’s not healthy at all – that I immediately chase after him.

This is the days before cell phones – the only person I knew who had one back then was Gerald. I don’t remember how I tracked Mike down, but Whistler isn’t very big, and I knew his patterns by then.

I follow him to Tommy Africa’s, the local nightclub where Gerald works the door and I go-go dance. There, I corner Mike and plead and beg to know what’s going on and what’s wrong and why did he leave and really… it’s not a big deal, is it?

My persuasiveness works – Mike comes back with me.

Yet the damage has been done. Not because of the revelation. Nor because of what it triggered in Mike.

But because I couldn’t allow Mike to separate out from me and do what he needed to do for himself.

I couldn’t trust that in that separation out, he would work through something and emerge stronger, ready to meet me on a new level.

I didn’t know that this dance of togetherness and separateness is the dance and rhythm of healthy relationship. Not the Romantic Idealised Bubble we’d been floating around in.

And it made them weak. It made Mike weak. Ultimately, it made our relationship weak.

I broke up with Mike two and a half years later, on Australia Day.

Always a huge party day in Whistler, infested with Aussies as it was. I’d been working at The Longhorn Saloon, and had stayed out afterwards, partying with a good (male) friend of mine. It felt liberating to be out with Mike. Our relationship had been feeling stagnant and I’d been feeling trapped. But I’d never discussed any of this with Mike – I still had no idea what I was truly feeling in life, let alone how to talk about it with someone.

I was home just before midnight – early, early, early in the days when we’d often party until 6am. And early compared to Mike, who often stayed out later than me with his buddies, drinking, and partying.

I walked in the door and Mike lost it on me. Jealous and mad and upset and I was late.

I stood in shock. This was the first time I could remember going out without him, and for months, he’d been staying out later than me. Plus I’d been experiencing minor anxiety attacks while waiting for him to come home. But I’d focused on working through this anxiety, on not demanding he come home with me so I wouldn’t feel that way.

Now, after all that hard work facing into my anxiety by myslef, I could’t believe he was upset when I came home before midnight.

I ended it right then and there because he couldn’t let me separate from him when I needed to. My actions from the beginning of the relationship had come full circle to create the ending.

But I’d made up my mind. And my mind ruled everything in those days – combine my iron-fast will with my rigid Mind and that was that.

Now, looking back on this relationship, it’s easy to see that it wasn’t a lack of love that stopped it from flourishing, but the fear, anxiety and lack of true communication. It was the lack of space and trust and freedom.

Now I understanding that at some point in relating with a man, one of us will trigger pain in the other.

That pain may lead to withdrawal. And that’s ok.

Withdrawal is ok. Space is ok. Separateness is ok.

Being triggered is even ok.

Because being in Love, allowing ourselves to be seen and to be vulnerable, will always result in us being emotionally triggered.

By their very nature, relationships bring to the surface old wounds, old ideas, old beliefs and old patterns so they can be seen and released.

Yes, there are things about me that will trigger pain and hurt in a man who loves me.

I know that this is no fault of mine, nor flaw of mine.

When that happens, as it will, I can stand back and trust that a man who loves me is strong enough to face his own fear squarely.

Just as I will face the fear that he triggers in me.

Each of us owning what belongs to ourselves – not dumping it on the other, or blaming the other for triggering it.

Together, in Love, we face our Fears.

That’s what commitment is.

Not glossing over it, or hiding it away, or denying it, or running from it.

But seeing it and facing it squarely.