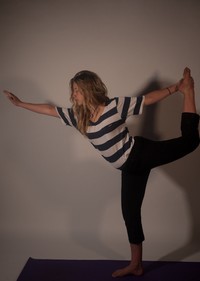 Lucinda on the mat..

A friend asked me the other day:

“How did you get involved in all of this?”

“All of this” being an all-encompassing voluntary role with the youth climate action movement, plus involvement with other social and environmental justice groups including – but not limited to – Gecko and 350 Aotearoa.

I told her, feeling like a complete cliché, that I’d done this yoga-based course called Embodying Your Purpose. It’s part of an initiative called Off The Mat, Into The World and it had, um. Changed. My. Life.

For the first 19 years of my life I was a perceptive, but apathetic citizen. I got it, bad stuff happened in the world. Forests got cut down, people got killed, oil got spilled, governments were corrupt, millions of people died of starvation, animals went extinct, and chickens lived in cages the size of an A4 piece of paper.

Not to me – I lived in a privileged, middle-class, suburban, Garden City bubble. I could get away with not ‘doing something’ about any of this, in fact it was easier not too. ‘Doing something’ always felt futile and impossible. It was too hard and it was much more comfortable to read endless books and daydream while doing well at school.

Helping the blank-eyed Bosnian refugees meant you had to organise a fundraising barbeque at school.  Slowing the ever-approaching threat of climate change and halting the extinction of hundreds of species meant you had to run a campaign to get people to change their light bulbs. Not only was it hard, boring work, but it didn’t even seem to help very much.

Refugees still died of starvation, the globe still got hotter and the tigers died anyway. So why bother taking action?

But part of me knew that I didn’t want to feel like this. I wanted to be able to hope, I wanted to dare to be naïve and brave, I wanted life to feel fresh and full of possibility. I did not want to be a cynic. Cynics are those who sip their G’n’Ts on the top deck of the Titantic while waiting for the lifeboats to launch and loudly proclaiming they saw the iceberg coming.

Cynic be damned, instead I signed up for a course called Embodying Your Purpose.  I wanted to get the meaning of life on a plate, a road map to happiness, and the answers to all my questions in four easy sittings.

And so, every Saturday for a month I attended a day long workshop where our group of 12 were given the tools and space to explore our stories, our strengths, our pain, and then to turn outwards to see how we could connect our own stories to those of the world.

Most importantly for me, we thought about how the things that made us come alive could in fact be exactly what the world needs. The course was grounded in yogic practices, and in how a yoga practice can make activism more sustainable and effective.

This was a new approach for me. Up until that point, yoga had been both my crutch and a way of retreating from the world. It wasn’t a bad thing necessarily. At the time I needed it – yoga had helped me  look inward and begin to heal myself, after struggling with disordered eating and depression. 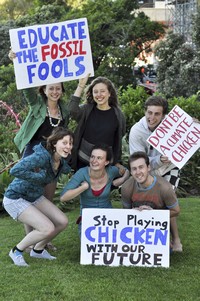 …and into the world with the Generation Zero crew

But what I learned on the Embodying Your Purpose course was a revelation. Yoga was not just something that affected me personally, it was a way of living and a way of, finally, ‘doing something’.

I didn’t come out of the course with a shiny new life all set up for me. But I did have a new direction I wanted to explore, and, almost instantly, new possibilities opened up. A life that had been closed and narrow was pried open.

I soon found communities and individuals that inspired me. I got involved with a range of local environmental groups over the year and this helped me find my feet. I found my home with Generation Zero, a nation-wide network of young New Zealanders calling for action to solve the climate crisis. Generation Zero works together to create a future that we, as young people, want to live in.

I guess I got, as my friend Lance describes it “activated”. Empowered, woken up, switched on, given a kick up the bum. Goodbye apathy and inertia. You don’t define me anymore.

I know that bad stuff is still happening in the world. The Amazon is disappearing bit by bit everyday, millions live in poverty, orangutans could be extinct in the next five years, New Zealand is mining it’s conservation land, and everyone seems fixated on endless economic growth, with no thought of the consequences.

But the difference is that I am no longer just a despairing onlooker. I am part of the solution. Taking action and ‘doing something’  enriches my life. Alone I can’t tackle all of the world’s problems, but I’m proud to be part of  local and worldwide networks of people who dare to hope, and who take concrete action to find new ways forward.

Now I’m starting this regular column for The Yoga Lunchbox, where I want to focus on the role yoga has in the lives of changemakers and activists.

There are questions I want to explore, questions like:

Watch out for interviews with other yogis and activists, as well as insights from my own experiences. I’m hoping to learn more about myself, the world and my yoga practice in the process. It should be an interesting journey. I hope you’ll join me.

More on: Off The Mat, Into The World, an international non-profit organisation.

“OTM uses the power of yoga to inspire conscious, sustainable activism and ignite grassroots social change. We do this by facilitating personal empowerment through leadership trainings, fostering community collaboration, and initiating local and global service projects.”

They run trainings, like the one I attended, which help people to connect with their purpose and to become more effective change makers. They also foster community collaboration, and initiate local and international service projects. More information about what the Off The Mat New Zealand team is up to can be on found on their website.