You are here: Home / Yoga Articles / Deepening • The Yoga of Life / Yoga & Ayurveda / How yoga practitioners can integrate Ayurveda into their practice 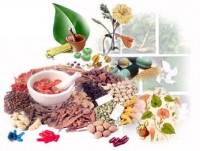 Ayurveda means ‘knowledge of life’  and Yoga means ‘union’ or “a system of exercises practiced to promote control of the body and mind.”

Ayurveda and yoga are sister Vedic sciences that have been united for thousands of years for the sake of healing body, mind, and consciousness. Generally speaking, Ayurveda deals more with the health of the body, while yoga deals with purifying the mind and consciousness, but in reality they complement and embrace each other.

So how are they connected or related?

To quote Vishnu Dass again from his article Ayurveda and Yoga, Ancient Sister Sciences. The similarities between yoga and Ayurveda:

For Yoga and Ayurveda modalities to work in a healthy manner one must have (viveka) discernment, whereby one can discriminate between reality and unreality, truth and falsehood, the eternal and the transient, true joy and passing pleasure. As well as (vairagya) the absence of egotistic emotional reactions, which cloud our perspective.

It is the purpose of Ayurveda to give us the means of health and healing on a physical and psychological level so that we can pursue the path of Yoga.

For the practitioner of both Yoga and Ayurveda one must choose a lifestyle that enhances their life for whatever their reasons might be. In the documentary film Enlighten Up it shows how yogis of all abilities have differing options on what yoga is, why they do it and what they get out of it.

From the documentary movie Enlighten Up: Dr Joseph Alter, University of Pittsburgh:

Yoga as we know it is really only about 100 years old. Without documentary evidence we are left to conclude that it was really reinvented towards the end of the nineteen century.

By the grace of God, it’s a subjective way of you know eradicating the instinctive weakness of the human being.

Yoga can take man into two ways of living, enjoyment of life, or liberation in life.

Whatever one’s participation is into Yoga, Ayurveda supports the individual with a healthy life based on Natural Law – appropriate for you personally. Ayurveda is tailored for the individual yet at the same time is a system relevant for everyone to learn from. It is a personal health care system, steeped in thousands of years of tradition, yet is appropriate to any culture and any era.

Yoga and Ayurveda are both based on one’s personal experience. The practice of self observation is the key. The more knowledge you have to exercise that practice the more complete your experience. And that often means walking your own path, being an individual and listening acutely to your true self. I like this next quote because it summaries what it sometimes takes to be true to oneself.

From Alexander Greens, The Secret of Shelter Island: Money and What Matters:

Diogenes is sitting on the side of the road eating his simple meal of porridge. A court philosopher sees him and comes over to chat.

“You know, Diogenes, if you learned to play up to the king like the rest of us, you wouldn’t have to live on porridge.”

Diogenes doesn’t even glance up from his bowl; he just says. “If you learned to live on porridge, you wouldn’t have to play up to the king.”

For any Yoga student, teacher, enthusiast, or those individuals interested in their own health and wellbeing, I am more than happy to give introductory Ayurveda Simplified Workshops anywhere in NZ or overseas.