You are here: Home / Yoga Articles / Teaching • The Business of Yoga / Teaching Insights / How to Avoid Putting Someone off Yoga for Life in Your Yoga Class 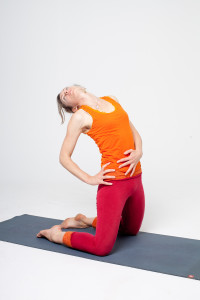 The function of the pose is always more important than the form.

Yoga might be one of the faster growing pursuits in the West, but there’s still plenty of people showing up to class, having one – or multiple – bad experiences and being put off for life.

And unfortunately, that initial interaction with a studio and/or teacher can set the tone for the way someone will forevermore think about yoga and ‘yoga people’.

Yes, there can be difficult first-timers and it takes two people to co-create a situation. But in the yoga room, the onus is on the teacher to make the student feel welcomed, seen, appreciated and understood. Anything less than this can see people fleeing the yoga room for good with a bad taste in their mouth and a worse feeling in their heart.

Because it’s already intimidating and challenging enough for many people to walk through the door of a yoga class or studio.

If you’re inflexible, have body issues, feel uncomfortable with movement, don’t like wearing yoga-style clothing, don’t like getting things ‘wrong’, or have a body that doesn’t fit the (former) stereotypical yoga body norm… going to class can be a huge challenge. The last thing you need is an inexperienced and ignorant yoga teacher triggering any of your latent discomfort.

(Editor’s note: I say former stereotypical yoga body norm because of the awesome work that the Yoga and Body Image Coalition is been doing in changing our concept of what a yoga body is. There is no ‘yoga body’, there are only bodies doing yoga.)

So here’s what not to do in your yoga class or studio, because you don’t want to put people off yoga for life.

1. Let a beginning student flail around with inadequate personalised instruction

Teaching group classes with multiple levels is a challenge, especially when those classes are drop-in and you’re constantly seeing a rotation of new people every week. However, if you’re teaching this kind of class, you need to be able to do a good enough job to make students feel ok about what they’re doing and how they’re doing it.

That means if a student has no forward rotation in their pelvis and you’re doing a sequence of seated forward bends, you incorporate block work into that sequence so the student doesn’t feel singled out and sees how to use the block correctly. Demonstrate using the block yourself, as this makes less-flexible students feel welcomed.

Pay attention during the warm-up and beginning of class to the range of mobility of new students and modify your class accordingly. Add more krama (stages) to the postures so that everybody has an access point for the posture, and somewhere to explore. More experienced students often know how to progress a posture and if you’ve been working with them for awhile, can find their way into the deeper krama while you work more intensively with the newer students.

If you don’t do this – if you let beginning students flail around while sticking to your fancy sequence and showing off your own prowess – you’ll alienate the students and likely put them off yoga for life.

Everybody can do yoga, when it’s taught in the right way. What that student should really be saying is:

“I tried yoga once, but the teacher didn’t know how to teach me.”

2. Call out a student in front of everybody else for “doing it wrong”.

Languaging is crucial, and so is the way in which we direct the attention of the class. Our intention may be to keep a student safe, or to ‘correct’ their alignment, but handled with a lack of discernment we can inadvertently make the student feel uncomfortable. Most of us have a highly honed sense of internal right/wrong and strive to do things ‘right’ to avoid feeling unworthy and less than. As yoga teachers, we don’t want to trigger this internal judge and critic.

Using softness and subtly goes a long way. Instead of telling a student they’re doing it wrong, suggest they explore in a way that takes them closer to where you want them to be. Use suggestion rather than commands or demands.

For example, if a student has their hands too close together in Downward Dog say:

What does it feel like if you widen your hands?

Using suggestion like this gets the student to self-inquire, which is different from imposing an external idea of right/wrong on the student.

You can also experiment with changing where you’re demonstrating in the class. It can be a powerful yet subtle adjustment to move around the class as you demonstrate,  doing the posture alongside someone who is struggling.

Be careful with this though – if there’s any hint of pride or superiority in your demonstration, that’s what the student will feel. You stopping and dropping into an effortless Crow beside them will body shame them. Instead, stop, and begin to set the posture up with full presence, not seeking to demonstrate your proficiency in the posture but rather allowing your deep sense of being to impact the student. Beingness always trumps alignment in a yoga class.

Only model what the student needs to see – there’s no need to go into full Crow if they are better working with their feet still on the ground and perfecting the breath within the posture and the movement of prana through the arms and hands.

Very little needs to be said direct to the student when you do this – you’re verbally cueing still for the rest of the class, and using your movements to visually cue the student.

“I tried yoga once but I was really bad at it. I kept getting it wrong.”

Nobody is ever ‘bad’ at yoga  because yoga is a process.

“I tried yoga once but the teacher focused on perfection of form rather than teaching process.”

3. Ignore a student who is struggling with your cueing because their body is not built to come into the posture the way that you’re instructing.

One student I know through friends was struggling with certain postures because of her ample bust. The teacher wasn’t able to give her any support and instead, as the student tried different things in the posture to accommodate her bust, the teacher called her out for ‘doing it wrong’.

If you don’t have an ample bust, or larger legs, or a belly, or shorter arms, or a lack of movement through the ankles or wrists, or any other of a myriad of body limitations, then it can be very easy to body-shame a student, even though that’s not your intention as a teacher.

When you see a student who is struggling with a posture, take a moment to look – really LOOK – at what they’re experiencing. Get present and feel into what’s going on for them before giving them any kind of instructions. And rather than directing the student, start with asking them questions about what they’re actually experiencing. Don’t assume you know what’s going on for them – ask them.

And then, armed with more information, instruct them in a way that supports the function of the posture rather than imposes the form of the posture.

The student with a larger bust could have been given blocks to place under her hands, lifting her torso higher in the lunge and providing more space for her chest. And if you don’t know what to do to support a student – ask them what they think might work for them. Students often have an intuitive sense of where to go in a posture to get around fixed limitations – even though it looks “wrong” to a teacher focused on the form of the posture.

“I tried yoga once but I felt really embarrassed because of my body.”

Even if you don’t know how to modify a posture for a student struggling because of their body, you can still make the student feel comfortable and welcome.

“I tried yoga once but the teacher didn’t know how to teach someone with a body like mine.”

All three of these methods focus on approaching yoga as a process where the function of the posture is more important than attaining a particular form.

There is a recognition by the teacher that the postures themselves are not the yoga, but simply a tool that we use in order to explore yoga. That is, yoga as process, yoga as presence, yoga as the relationship we have to our bodies and minds on the yoga mat, yoga as consciousness, and as awareness.

Teaching from this perspective naturally teaches self-inquiry as the core of the practice. And this is the essence of yoga.

In contrast, making declarative and definitive statements that ignores the reality of a student and perpetrates a subtle violence against the person. And this is not yoga – which is why so many people never come back.

They came for yoga.

Unfortunately for yoga teachers and studios, in the student’s mind, what they got was yoga, and now what they don’t like and don’t want to do again is yoga.