You are here: Home / Yoga Articles / Teaching • The Business of Yoga / Teaching Insights / How to find the purpose in your teaching 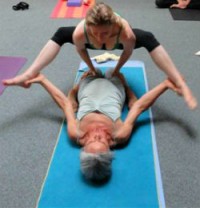 Once upon a time there was a young yoga teacher who spent her days cleaning the windowsill in her acharya’s home, up on a ladder, terrified of heights, scrubbing away.
The other students of this one acharya were packed off to teaching assignments, but our young yoga teacher was made to wait.

As days became weeks and weeks became months, our young yoga teacher waited patiently, perched upon her ladder, for her big day to come.

On the verge of despair that she was destined to never see the inside of a class, this is when her teacher came to her with her first ever assignment. A rehabilitation centre. What joy, a real class, an opportunity to teach.

Scrambling down from the ladder, she got straight to work on putting together her sequence. Two weeks were dedicated to perfecting the flow, practising it, going over it with her teacher. And when the day came, she was ready.

She arrived at the rehabilitation centre armed with a smile, a warrior sequence and a strong standing flow. When she was shown into the classroom seated before here all lined up in nice neat rows were her students. All of them quadriplegics.

Packing away her planned standing sequence, this young yoga teacher was able to pull out a yoga nidra and lots of laughter from her bag of tricks and she continued to run a successful class at the rehabilitation centre for months to come.

This teacher is Jenifer Parker of Healium in Wellington. She told us this story of her first ever yoga class as an introduction to of our third and final weekend of the Advanced Yoga Teacher Training programme she was running in Nelson.

Although I’ve never walked into a room full of quadriplegics, I have planned a wonderfully vigorous, challenging class and walked in to find the bodies in front of me were aching for some rest and rejuvenation. Leaving me with choice to make: stick with my planned class and hope that the bodies in front of me would feel revived from the rigorous activity; or scrap my plan entirely and try to give these students what they so clearly needed.

Rather than a fire practice with 108 chattarangas, I could switch it out for a slow, steady series of sun salutes with an emphasis on the breath. For example.

When you stand in front of a group of people and tried to impart some knowledge, it takes some fore-thought. What you’re going to say. When? How?

When you’re a new teacher you get really comfortable in the what, how and when. And when you’re forced on the fly to change any aspect, it’s not a very comfortable feeling. You need to rush to unravel what was so closely knit together and try to rework it. And with so much to think about and consider already, the why may be rushed through.

This is something I thought I knew.

Planning a yoga class is like getting dressed: undies, then pants, then shoes. Warm up, practice core postures, warm down. I can creatively weave these simple elements together. I can lead a class from a starting point to a stopping point. Of course that’s just the sequencing part. What about the theory part, what does that mean?

Well, the theory answers the question: *why* are you doing what you’re doing? It’s the why you need to arm yourself with when walking into a room filled with the unexpected.

The Ashtanga series, for example, is designed to, among other things, be stimulating. Therefore, it starts and finished with stimulating poses and has all the calming elements sandwiched in between. This is also *why* it has calming-sarvangasana before stimulating-sirshasana.

Yoga teaching styles without set sequencing require a bit more thought as to why you’re doing what you’re doing.

As a teacher you’re still intending to impart to your students confidence, strength, flexibility, body awareness, a connection to self or whatever else you have devised as the purpose behind the day’s practice. The asanas chosen are simply a vehicle to arrive at this purpose. A commitment to your overall objective allows for a certain amount of fluidity, which will allow you to re-think and re-organise mid-class.

Knowing why you’re doing what you’re doing allows you to walk into a room full of quadriplegics and carry on as though it’s exactly what you planned for.

Trying to find the purpose in your practice? Jenifer is offering this Advanced Yoga Teacher training again in Wellington over three weekends in April, May and June 2012. To find out more about the training get in touch by emailing hi@healium.co.nz or drop by the studio at Lvl 4, 276 Lambton Quay in Wellington.

Helping to balance out her 9-5 work day, Elissa is a yoga teacher (Healium, 276 Lambton Quay, Mondays 5.30pm, and various gyms), a wine enthusiast and a dark chocolate nut (no reference sourced). Hailing from the wilds of Northern Ontario, she now calls windy Welly home. Her column, Adventures in Teaching, is designed to open a dialogue for new teachers. Voicing questions and answers, doubts and insights, she aims for harmony between action and intention. You can ask her a specific question about teaching here.