You are here: Home / Yoga Articles / Awakening • Creating a More Beautiful World / Musings from the Mat / How Living Your Yoga Can Mean Taking Parenting Lessons From The Rock (Dwayne Johnson) 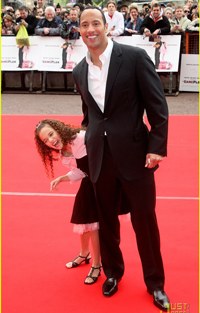 First night in Napier, staying at my Uncle’s house.

The TV’s on. I haven’t lived with a TV for three years. It’s novel.

I sit to eat my dinner and catch the beginning of a movie. By the time I’ve finished my dinner, I’ve grasped the plot and I’m chuckling at the weirdness of the Universe.

The movie is about a high-achieving, selfish, self-centered football player who discovers – when she shows up on his doorstep – that he has an eight year old daughter.

The plot revolves around his shift from a life that’s all about him and his success, to a life that’s about being a Dad and looking after his daughter.

It was a pretty crap Disney-style movie and under different circumstances, I wouldn’t have wasted my time sitting through it.

But living your yoga means paying close attention to what’s right in front of you and using whatever that is to see yourself more clearly.

No need to escape to a cave to understand one’s self; with consciousness, anything in our modern life can become a mirror, even a movie.

And my particular case, that movie was The Game Plan. What did this crappy Disney movie about a self-centered football player have to do with me?

Because I am – or was – a self-centered writer who knew kids would only be a distraction and I wasn’t interested in having any. Oh no, my life was far too important and there was no room for children.

Four years into childsville, I knew that a part of me was still holding on to this story of what my life was supposed to be like.

Nevermind that I adore my son and would be devastated if he wasn’t in my life.

In fact, as part of the on-going yoga of parenthood, and after yet another story-telling episode, I did a death meditation to remind myself of this very important reality.

Death meditation is a trick I use to shift my psyche around something. I used it most recently to face into a fear of losing a romantic partner. This time, I called my own bluff when I pulled the “This was not part of my game plan story” and used the Death Meditation.

My son and I were booked to go on a ferry crossing, leaving the South Island of New Zealand and travelling to the North Island, to our new home in Napier. I used that up-coming real life event to make the meditation more real. My son is a strong, active, energetic kid and I lay in meditation one night before bed and imagined what it would be like if he fell over board.

This is not a meditation for the faint-hearted. It’s bloody awful. It almost feels frivolous to describe it, as if it’s just another yoga practice like doing positive affirmations or a Loving-Kindness Meditation. It’s not.

Imaging the death of someone you love is harrowing – it’s not something that just happens in the head, but something you feel in the heart and in the entire physiology of the body.

Afterward, my heart was beating faster, my breath was coming fast and I felt shaky, like the bottom had just dropped out of my world.

There was the reminder I needed that I love my son and I would never wish for anything else.

It was the reminder I needed that when I pull out that same damn story about not wanting kids, I’m avoiding the reality of the present moment. I’m pulling away from the real emotions I’m feeling in the moment and I’m going up into my head.

Instead, I need to find a way to stay with the difficulty of parenting, without using story and ego attachment to avoid it.

After awareness… well, I’d be bold enough to say that awareness is the first and only step. What happens after that will be different for everyone, depending on what they are bringing awareness to.

You know you’re creating your own misery. The blame has to stop. The story has to stop. And when the blame and the story stops, acceptance creeps in.

In my case, I’d made a decision that instead of spinning the same old story about motherhood and my life, I was going to drop it.

I was going to embrace exactly where I was as a parent and give parenting 100%. I recognised it would still be tough and I would never be perfect, but I’d stop using a story to escape those moments of imperfect toughness.

A day later, after crossing the Cook Strait in a ferry and arriving in Napier, I sat down to a movie about a central character going through the exact same situation as me. Only somewhat exaggerated – The Rock ends the movie turning down a $25 million dollar advertising deal because it’s out of integrity with his love for his daughter.

I doubt I’ll be turning down $25 million dollars because it’s not the right move for my son.

Plus, I check in with myself – am I being self-centered? Am I being selfish? Is there some way I can fully give to this situation?

This is not about sacrificing myself for my son, but about being more mindful of the underlying energy and intentions I bring to all our interactions, and to the way that I plan our life.

It’s small things, like choosing to move in with another single parent because I know my son will be happier living with other children.

Or noticing that he loves riding his bike and I need to find some wheels of my own so I can keep up with him (I’m eyeing up rollarskates.)

I may not be a natural-born mother, but that doesn’t mean I can’t be a quick-study. Like anything – with will, determination and an intent to do a damn good job, I know I can excel at this as well.

Oh shit – is that the self-entered high-achiever showing up again, making this all about her… Doh!