You are here: Home / ARCHIVE / Physical Practices / How Bone Compression Prevents Me from Doing Bhujapidasana 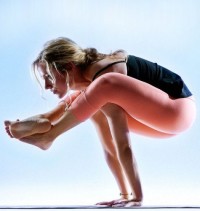 Bhujapidasana requires at least 90 degrees of wrist extension to achieve.

I’ve been aware of the role that bone compression plays in our range of movement since watching a series of Paul Grilley videos on YouTube.

Yet despite knowing this intellectually, it wasn’t until I attended a Yin Yoga Workshop with Karin Sang and Markus Henning Giess of Yin Therapy that I realised how bone compression was impacting my yoga practice.

Over the course of the day, Markus lead us through several bone compression tests so we could determine our natural range of movement.

We did ankles, external and internal hip rotation and necks.

Each time, he would get the entire class to do a particular movement, and then pick out those of us with the largest and smallest range of movement. Those people would come up to the front of the class, and then we would examine how bone compression in that particular area could impact certain yoga postures.

The first test we did was for ankle compression. It was very simple. From hands on hips, standing up straight, without leaning forward or backwards, so maintaining Tadasana spine, Markus asked us to squat down.

I moved about half an inch. I wasn’t surprised – I’ve been struggling with Utkatasana (Chair Pose) for years now. However, without being able to move my butt back, or let my torso come forward, even I was shocked at the paucity of movement available to me.

Especially when I looked around the room and saw some other people who, while staying upright, could sink right down until their hips were the same height as their knees.

The reason? You might think it’s tight calves, or achilles. However, I had no sensation of tension in the back of my legs. The only sensation I had was one of being stuck, and a dull ache in the front of my ankles.

This is bone compression.

Markus called up four people to the front of the room – two of the best and worst. And yep, I was one of the worst.

He had us stand in a line and do the exercise again, demonstrating the enormous variation in bone shapes and range of movements. Then he pretended to be a yoga teacher and tell the two of us with limited range of movement int he ankles to:

We did – by leaning out upper bodies forward.

‘Get those torsos upright! Lean back!’

We both looked at him helplessly. We couldn’t! Unless we pressed back up again.

On the other side the folks with ankles that moved were effortlessly squatting deep – one woman could bring her hips down to touch the back of her heels with her feet parallel and together.

Markus had us change into a lunge – the variety usually frowned on in yoga classes now, where the front knee is allowed to come forward over the ankle. In my case, the knee had no forward movement. It was stuck directly above the ankle. Working through the ankle and the knee impacted the depth of my lunge by exactly 0 degrees.

However, those with great ankle flexion effortlessly plunged down into a low lunge with the knee soaring forward into space.

And it was nothing to do with tension in the body – whether muscular, emotional or mental.

Boy, what a relief!

But now I can do Utkatasana my way, without trying to get somewhere that’s completely impossible for me. I may barely squat at all, but I can maintain form and energy lines that way. Or I can put a wedge underneath my heels which artificially gives my ankles more flexion – or seems to – so I can squat down deeper if I wanted to work my thighs and hips more.

As we progressed through class, testing ranges of movement in the hips and neck, Markus demonstrated time and time again that the degree of difference between our skeletons in range of movement isn’t only 5 or even 20 degrees.

It was sometimes more than 90 degrees different.

Some people had very little external rotation in their hips at all – sometimes only 10 degrees, meaning they should never attempt to do anything resembling a lotus or half lotus posture, and be very mindful of shin placement in postures like Pigeon. Other people had more than the 90 degrees needed for Lotus and could easily whip into Lotus without any prep.

Note – the tests that Markus had us do took all muscular tension out of the equation. This isn’t about how flexible people are. It’s about range of movement as determined by bone structure.

Later, musing on my terrible ankle flexion, a light bulb went off. The corresponding joint in the body is the wrist. What is my wrist extension like? Because poor wrist extension would impact all arm balances – which is exactly where I have been stuck in my Ashtanga Practice for over a year. On Bhujapidasana (Shoulder-Pressing Pose). 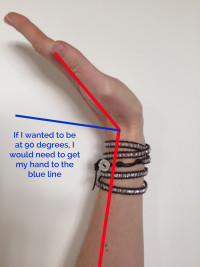 It’s easy to check wrist extension. I looked at my wrist and gently bent my hand back as far as it could go, without using anything like a wall or floor to press against. About….45 degrees. Then I used my other hand for leverage to see if there was any more movement. Nope. Stuck, at maybe 48 degrees.

If you place your hands flat on the ground, and your arm is perpendicular to the ground, that’s a 90 degree angle. Or, as demonstrated in the image on of a woman in Bhujapidasana at the top of the article, sometimes over 90 degrees.

I have only 45 degrees extension! No wonder every time I came to the arm balance section of a class I felt stuck and frustrated. 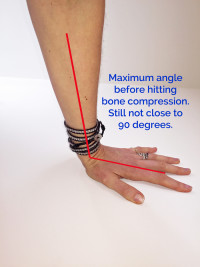 Getting close to 90 degrees – barely!

I thought it was tight hips preventing me from getting near to the postures. Often I couldn’t even get my hands on the group in the right set-up. But it wasn’t tight hips – it was poor wrist extension.

And the entry pose for Bikram Ustrasana! My nemesis of the entire Bikram series. You’re asked to bring your hands on to your hips, fingers facing up and bring your elbows together, opening the chest up and bending back.

I HATED this. I could not do it at all. I couldn’t bring my hands into position. I felt stuck. Often it brought up tears. And eventually, I began to ditch it altogether and instead interlace my hands behind my back and use that as the entry pose.

Bikram teachers didn’t always like that though…. but in ten years plus of struggling with that posture in class, not a single teacher ever took the time to find out why it was so impossible for me.

Which is exactly why set sequences and group classes taught by teachers with a poor understanding of body mechanics, or a rigid adherence to rules, suck.

As Markus demonstrated in the Yin Yoga workshops, we humans have enormous skeletal variations. Those variations limit ranges of motion for our joints and determine how postures will work, or not work, for our bodies.

Without an understanding of our bone compression, or that of our students, we can waste years and tears on yoga postures simply because our bones and joints aren’t suitable for that posture, or that variation.

The least we can do for ourselves is test ourselves with the bone compression exercises, determine our fixed range of movement, and then work with yoga postures accordingly.

In an ideal world, we would also do this for all our yoga students.

Now I need to go back and have a chat to my Ashtanga teacher about the appropriate way to adjust or work with Bujapidasana based on my wrists. Perhaps there is still a way in… without constantly falling over on my butt because my weight is all too far back. Or perhaps, there is not!

Note: Angles and lines in images are approximate. That is my arm & hand, at full range of movement and I’ve drawn the lines as accurately as I could.