You are here: Home / Yoga Articles / Awakening • Creating a More Beautiful World / Musings from the Mat / Getting back on the bandwagon: The evolution of a home practice 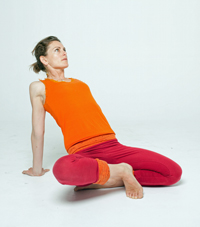 Home practice evolves, as does asana

Happened as soon as I arrived in Glenorchy and put Samuel back into childcare.

It happened because I made it a priority.

It happened because I knew I needed it. Craved it even.

It happened because I wanted it.

It wasn’t that I’d ever stopped practicing – I still was. Every day I taught yoga, I practiced asana. At home, I practiced bits and pieces or asana here and there, a seated session after dinner, a sprinkling of mediation there, Yoga nidra at night… but my practice wasn’t the cornerstone of my day anymore.

I’ve had a home practice now for about eight years.

It started, back in the day, with Astanga yoga, and then Power Yoga. Asana was a strong feature for the first four years at least. Music showed up in about year three and the practice shifted from rigid and defined to fluid and exploratory. Still mostly asana though.

In 2008 and 2009 I began exploring various sadhanas – daily practices I’d commit to for forty days at a time for specific reasons. I discovered I loved pranayama, meditation, chanting, specific use of bandhas and visualisation.

Asana was still my focus though, still the daily practice.

In 2010 I finished my yoga teacher training with a ten day immersion in LA with Shiva Rea. There, I learned a detailed Tantra meditation (including chanting, pranayama, mudra, drishti and visualisation). I fell in love with it, and that became my daily practice.

Asana still featured, but only when I felt like my body needed to release tension and work out some kinks. The daily practice was now Tantra Meditation.

Then things got kinda messy. Instead of a consistent daily practice anchoring me into my day, my practice shifted to something that happened spontaneously in the moment. Sometimes during other things – like while washing dishes or cooking. Sometimes leading into dedicated asana practice. Sometimes merely the quality of being present throughout the day, with no dedicated asana, meditation or pranayama.

I was still practicing lots of yoga, but in a haphazard, unfocused, mixed up kinda a way.

I worried I was doing it wrong. Failing. Letting myself down. Letting my students down.

I felt like I’d fallen off the practice bandwagon altogether.

Until now. And until reading Erich Schiffmann inVictoria Bailey’s new book Sharing Sadhana. A collection of interviews with 14 high profile yoga teachers, Victoria wants to know one thing and one thing only;

While reading the other teacher’s answers was inspirational and interesting, Erich’s answer was insightful and gave me an ‘A-ha!’ moment.

He talks about how his home yoga practice has evolved over the four or so decades he’s been practicing. In particular, he spoke of a confusing time in his life when he felt serious resistance to the disciplined practice he had been doing. Erich had his system down pat – on Monday he did this, on Tuesday he did that, and on Wednesday it was backbends.

But all of a sudden, he didn’t want to do that anymore.

And he had no context to understand what he was experiencing.

“It felt like everything was going wrong. In retrospect, I realised that all the discipline, all the hard work, was working.

…The discipline, the structure, builds sensitivity. Then once the sensitivity has been cultivated, the energy starts to take over.

You don’t just do backbends because it’s Wednesday. Instead, you transcend the discipline, start transcending the structure, and you start trusting your inner sense about what to do or not to do.”

Ah… at a certain point in our practice… we transcend the structure and the discipline and allow the energy to take over.

There is no structure.

The is no discipline.

All I do is stand, or sit, and tune into my breath. My breath helps me tune into Prana. Placing awareness on Prana makes it feel stronger. Prana starts to move. I follow the Prana. Mostly, I’m very still, in a meditative state. Sometimes, there are very slow movements, this way and that.

Erich goes on to describe this state as going ‘on-line and listening’. I’d concur. I tune in, until I connect with something greater than myself, and I allow that to lead me.

My practice then becomes simply taking the time to stop, tune in and listen. What follows is perfect.

But this way of practicing – tuning in and listening – is not about doing what I want (and avoiding the awful stuff).

No, when I tune in and listen, the ‘I’ has ceased to exist. There is no ‘I’ to want this, or avoid that. A desire or aversion to what’s arising in the practice would signal ‘I’ had taken over again.

That I’d fallen out of flow.

There is great relief in releasing that amongst the structure of Astanga and Bikram and Iyengar, there is a road map and context for where I am.

There is no either/or.

Thinking of starting a home practice? Curious about how other yoga teachers practice at home? Need to get inspired for your own practice? Check out Victoria Bailey’s new book ‘Sharing Sadhana – Insights and Inspirations for a Personal Yoga Practice’.

She interviews 14 high-profile teachers, and shares an in-depth word for word interview from each on their daily sadhana. It’s helped me with my home practice, I’m sure it will help you with yours.