You are here: Home / Yoga Articles / Starting • The Foundations of Yoga / Home Yoga Practice / Forty Days of Meditation and Manifestation – Did It Work? 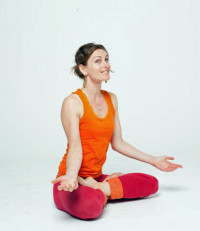 It’s something I completely made up.

I’d been wondering for many months about combining daily meditation with a conscious manifestation process because I’d observed in my own life that the first key step for creating anything new is always getting clear. Usually, before I write, I meditate or walk first.

This helps to shift me into the ground of being, and out of my head. Out of this space, creativity and flow arise with ease. I wanted to apply it to manifestation, so made up a process to do with daily meditation, put it altogether in a PDF and launched it a few months ago. (Download it here.)

And then I started the practice, along with a handful of other people who downloaded the PDF.

I had no expectations – if anything, I was skeptical. Would this process ‘work’? Would I be able to manifest my heart’s desire? And could I do it without ambition?

As it turned out, yes, I could. But that’s not the interesting element. What’s interesting is the process that drove it all. That’s the really interesting thing.

First, I had an idea of what I wanted in my life – or what I thought I wanted. A new car. Mine has done nearly 300,000 kms and is pretty rundown. A new car would be awesome. However, this M & M process isn’t about deciding things with the mind, it’s about musing on things and allowing information to arise from within – from the ground of being if you like.

I sat with the idea of a new car for one or two meditations and it became clear that this wasn’t the thing to manifest. Instead, I was directed to focus on income-creation. X amount by x date. Both the amount and the date seemed wildly out of reach.

But this was the next part of the process – to notice the thoughts and feelings that came up around the idea of earning that much within that timeframe. The amount and date weren’t important at all, but functioned as a trigger to release my deep buried ideas about money and earning.

As I sat with the amount I realised that I have earned this amount of money with ease before in my life – twice in fact. So what was different about now?

This was my first insight. That I was easily capable of earning that much money, and the fact that I wasn’t earning it right now showed something was in the way.

Now the M & M had turned into a detective story. And it was all about adventuring deep within to see what was really going on underneath it all.

This was subtle internal work that had nothing to do with “manifesting my heart’s desires” as such… yet it was the act of desiring manifestation that made the work possible.

Over the course of the forty days, I continued this work. I sat in meditation every day, opening into my desired manifestation, noting the feelings and thoughts that came up around it.

As I underwent this process, my day-to-day life start to shift as well, without me having to consciously do anything.

This was the non-ambition space I’ve been living in for awhile now.

I launched a yoga course and only had four people sign up. During this process, I noticed how contracted and tight I was around the course, and how focused I was on getting enough people and making enough money. I realised I didn’t like the way I was feeling.

Usually I would have cancelled a course with such small numbers. Instead I realised I should be giving away one or two places of courses to those who wouldn’t otherwise attend due to finances or priorities. Feeling into that I realised I was excited about that idea… so I promptly gifted a place on the course to a close friend who’s passionate about yoga.

The next day, three more people signed up. I ended up with eight paying students and the course has been fantastic to teach.

Big insight – I realised that lately when I’ve planned workshops or courses I’ve been worried and concerned about getting minimum numbers, rather than feeling excited to teach and share the material. I don’t know if my internal feelings have anything to do with what happens in the world… but I would rather be excited and pumped about doing something than worried and concerned!

When I reflect back on the times in my life when I effortlessly made money, it was because I was pumped about sharing fun experiences with other people and creating awesome experiences for them.

All the while, I’m continuing to meditate every day and do the manifestation process.

There were many more insights along the way, and some deep realisations too. Plus all kinds of things happened. Not only did I teach my first successful six week yoga course, but I signed up for more teacher training with Power Living, I did a How to Launch Yourself as a Professional Speaker Workshop where I possibly landed my first keynote event, I recorded my first professional yoga video and I decided to move back to Wellington to pursue exciting opportunities down there.

Huge movement! (And yes, all without goal setting or ambition. These things just kept happening – literally showing up right in front of me.)

Now, a week or so after completing my Forty Days of Meditation and Manifestation practice my life looks and feels completely different. And it’s all a result of the subtle and deep internal work I did in the meditation and through out my day.

This is where real change happens in our lives – inside of us. Get clear, see what’s really going on inside of you, and focus on shifting those behaviours and thoughts. Your life will shift as a result – it has to. It’s impossible for things to stay the same when we change on the inside.

Books like The Secret etc promised so much for so little. Just visualise what you want and it will happen! It’s not true at all – but it is a part of the process. The real secret is that deep, subtle changes help you to align with what’s true for you. Out of this, your heart’s desires arise.

But you have to do the work.

You have to get quiet.

You have to listen.

You have to notice those fleeting moments when your unconscious reveals itself. And you have to change what you’re thinking and feeling on a deep level.

Until I did this process, I hadn’t realised that I’d been feeling like a failure for ten years, and because I felt like a failure, I expected things to fail. Those feelings and expectations were driving me.

If you had have told me this, I would have laughed at you. I wouldn’t have believed you. It was only through the process of M & M that I was able to see my own deeper truth.

Often, there’s lots of resistance. I love meditation, and can effortlessly sit for half an hour of more. Yet I found on this process that I was beginning to resist and often wanted to stop way before my timer went off. This is always a sign that things are working – that you need to stay the process and just keep sitting still.

For many of us, we’re not used to reading the signals like this. We feel resistance to meditating and we just don’t bother. We flag it for the day. We don’t realise that every time we do what we’ve always done, we’re going to get what we’ve always got.

Resistance is your friend.

It tells you where the treasure lies.

It tells you where to dig deep, where to stop still, where to listen intently.

There’s nothing magical or mysterious about manifestation. We all manifest things on a daily basis. We feel hungry, imagine lunch, go buy lunch and eat it. That’s manifestation.

Ready to do a Forty Day Meditation & Manifestation Process? Download the PDF here.