You are here: Home / Yoga Articles / Teaching • The Business of Yoga / Yoga & Community / The benefits and pitfalls of conscious community 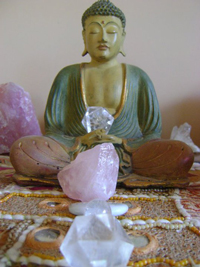 Living in an intentional community in the city

Given the discussions I often hear around me, and the positive reception from Jennifer’s recent article about family friendly spiritual communities, it seems like there are many people wanting to be involved at some level in a spiritually motivated community.

Not only being a part of such a community group, there appears to be a growing swell of people wanting to live within a conscious and intentional community.

I’ve co-created and lived in such a community, right in the heart of Wellington, and am now in the process of setting up another, a little further out from the city this time.

In the spirit of sharing insights, I thought I’d offer my reflections on what it means for me to be living in an intentional community.

Firstly, what do I mean by intentional community?

It’s actually not such a ponderous question. Five friends, including my husband and I, decided we wanted to live together; intentionally. It’s kind of a step up from being flatmates, in that we wanted to share space and our spiritual growth together, but falls just short of a collective wedding <grin>.

I jest not. When my husband-to-be and I announced our intention to marry and move in together, it caused such a stir amongst our current flat-mates that we decided to enter into a discussion around living as a community.

There was a collective I do from each of us, and a commitment to make this work.

We were fully aware that we were opening up a space for ourselves where our spiritual growth was a given. That we were going to bump and grind with each other – in the service of living in a more truthful, conscious, and loving manner – was also a given. Keeping this space open would require an on-going commitment from each of us.

We wrote down our requirements for a space that would support us in that process. Procuring the house happened very organically. You could say, the universe, God, higher self, was in full support of our intention.

We found a beautiful large house in Hataitai, minutes from the central city of Wellington, and called this space the Sanctuary, for that’s what we saw our house and our collective energy offering our wider circle of friends.

We found a love for hosting yoga community events such as Kirtan and potlucks, with no one person saddled to the job of preparing or cleaning up. We all felt honoured to host and pitched in accordingly.

Between the five of us, we had an age range of twelve years, a German, Scottish, Welsh and Kiwi mix, and with vastly different jobs keeping us afloat. What we all had in common was our meditation and/or yoga practice and drinking copious cups of herbal tea concoctions out of deeply rustic teapots.

It was a beautiful time.

As with all honeymoon periods, a few loose threads started to appear after a season or so and we had to devise ways to make our living situation flow and our spirits to flourish.

We found the single most adhesive practice of our community was our regular heart-shares.

It’s not a new idea, in fact it’s rather ancient; a circle, a talking stick, an open heart that expresses what’s on top.

Heart-shares became our reset button. Without fail, it pulled our intent back into the forefront of our lives; we had chosen to live together in order to be more conscious and kind human beings.

As you can imagine, living with four other people is going to – at the least – create some stretch marks. It became apparent that something else we all had in common was a sense of alienation from our families, particularly our parents, and the comradery of our circle began taking on a family constellation. Unresolved issues with parents started to appear in our dynamics.

Yet we were able to touch the wounds that, if exposed in its native environment, would trigger our hearts to close; defensiveness, anger, whatever. In the Sanctuary, we opened. Not without tears mind. But we learned to open to our own process.

Given our temperaments, most of our healing and reflection was a personal process, done in private. The heart-share became a platform where we could take responsibility for our actions and ask for the help we needed in order to stay an open and loving person. The request might be for privacy, or a sounding board, or simply an acknowledgement that I can’t be present in this moment.

From my experience, part–in-parcel of being in a relationship with someone – anyone – is the inescapable truth that that someone will be holding a mirror up to me, and I will get to see the bits of me that I don’t necessarily want to see.

To be in a conscious relationship is to welcome that mirror.

I encountered my shame in the confines of the Sanctuary and, at first, it was a blizzard to get through; a cold-snap that could easily have been forecasted – had I been honest with my motivations – and then it all blew away without a trace.

See, I use a moon cup. It’s an environmentally-friendly way of dealing with your period, rather than flushing tampons down the loo. This approach means you can insert a latex cup to collect the blood, wash it out and then reinsert. After each period, all you have to do is steralise it by boiling it in a pot for five minutes, and you’re good to go. It’s easy and sound.

When one of my house-mates found out I was sterialising it with a kitchen pot, he questioned me as to why I hadn’t informed everyone that I was doing that; given that he, and others, might have a preference not to use that pot.

He was right. I could have been upfront about it.

But I was burning with shame at this confrontation.

It touched the part of me that wanted to be discreet about womanly things. That deep in my psyche, I was still holding on to the fact that I was unclean; that my period was unholy.

Christ. I had no idea I believed those things.

I actually bawled when all those feelings surfaced.

My first impulse was to defend and push the sensation away. But then, with the support of the heart-share around me, I consciously welcomed in the movement of energy.

That energy was a drowning character of led weights, and in the second it took to close in and claw at my skin, I could feel an equal and opposite reaction; with out my resisting it, all the residual energy pulled away from my skin. I literally felt the energy dissipate the way puddles steam in the sun.

Shame, I realized, is a peculiar death, because it never in fact lived.

And then my house-mate hugged me. He hugged me the whole way through my bawling.

That’s kind of what it’s like to live in an intentional community.

And then there was the time I decided to get spiritual counseling from my meditation teacher because I couldn’t shift my antagonism towards a particular situation, and every time the situation arose, I would deflect an energy of injustice out. I couldn’t find a way of being responsible for my own feelings.

One thing I love about meditation teachers when you ask them for help is that they don’t indulge the story. My meditation teacher helped me to find my question: am I being kind to myself when I act or respond in this way?

I was suffering. And if I was really honest, I was suffering because I was choosing not to open my heart to someone. I had so many imprinted thoughts about this person’s actions, that all that was happening whenever the situation repeated itself, was that my mind clocked up ‘I’m right’ brownie-points.

It’s a while ago now, that talk with my meditation teacher, so I can’t recount the wise words offered, but I came away with an intent to clear the imprinted “brownie points”. A poem I wrote at the time reflects this:

I wanted the kindness and freedom of that sentiment so badly, and that intent won though. In clearing my thoughts about the situation, my house-mate “miraculously” shifted his behaviour. It was like I’d locked him into a story, and by freeing the story, I freed him. And me.

That’s how inter-connected our energy got.

Needing a soft hand to peal back the layers

The dynamics in our intentional community were hitting a very subtle layer. At the same time, I was coming up against core, primal aspects of myself; aspects that I’d outgrown and needed to let go of. I wanted a soft hand for this work, like the immeasurable subtlety of trees and bush that have both healed and soothed me in the past.

So after two years of living at the Sanctuary, I made the hard decision to leave. A new energy was pulling me away from the city and I found I was not able to sustain an urban pulse, despite the sanctuary’s nurturance.

The pull to be rural, (or to be more precise; to be living with nature) became so strong that I followed it, with no reasoning, no plan, no community on hand, and no house. I left it all, based on my instincts that this is the right thing for me to do.

Leaving the sanctuary of our intentional community

Living at the Sanctuary was never an easy ride, but for all the growing pains and stretch marks, I come away loving each and everyone of the Sanctuarians so completely.

Perhaps because I know them so completely.

I remember one heart-share where someone piped up:

I’ve never felt unconditional love before… this must be what it is… I mean, you’ve all seen me at my worst and you’re still all here supporting me and loving me.

We all hugged. It was true for all of us.

I wrote this article two months ago now, when my life had a different tenor and I had galvanized my ideas about what I thought I wanted.

‘What I wanted’ didn’t flow, but what arose in its place are the seeds of a new conscious-living flatshare on Wellington’s south coast.

There are three of us committed to establishing our new retreat-like space, with a move-in date of a couple of weeks away.

We’re looking for a fourth person

So if you’ve read this far – in what’s turned out to be the world’s longest flatmate advert – and you’re committed to living a kind and conscious life, sashayed with sanga and kirtan and yoga and meditation and baking and jamming with 3 others, drop me an email (alys . titchener AT gmail . com) and I can provide more details.

Or if you’re wanting to start, or have been a part of a similar enterprise, write a comment below and let us know your thoughts and experiences. We can all learn from each others’ insights.