You are here: Home / Yoga Articles / Deepening • The Yoga of Life / Yoga in the Media / Five reasons why stock yoga photos suck, and what you can do about it

Oh sure, the model in the photo will be approximating her body into the shape of a yoga posture, but she’s not actually practicing yoga itself.

Yoga isn’t a posture, it’s an internal state of being. It’s the quality of mindfulness and presence we bring to the yoga posture.

Ditto with many meditation photos. The model has got their body in the ‘right’ position, but they are just sitting there… there’s no meditation going on at all.

For those who aren’t yet sensitive to the internal states being presented, a faked yoga posture looks like any yoga posture. But for those who can see what’s yoga and what’s not, a faked pose just looks like someone doing gymnastics, or someone pretending to practice yoga. And this matters.

2. Yoga ain’t all white and shiny and pretty and happy

Need I say more? (Apologies to young, thin, blonde, smiley women. You’re cool – it’s just not cool when you represent all of us, all of the time.)

Yoga is all colours, all sizes, all shapes, and all moods. Diversity please! I mean… it’s the 21st century already!

Sure, a beachside practice is lovely (if there’s no wind blowing sand in your face), and new yoga clothes make us feel a millon dollars… but reality is we practice where we can, we wear what we’ve got and mats are always optional. Can we forget the perfection and show us some reality? Something to relate to? Something that might even make us laugh?

What about sweaty bodies, red faces, hair falling out of ponytails and eyes rolling around in exhaustion? That’s yoga.

4. Blandness, and the abuse of white

It’s everywhere, it’s everywhere. White White White. Comm’on, really? That’s the limit of the subtle imagery you can bring us, white to represent purity? Who wears white in real life? It’s see through, it shows dirt within a nano-second of leaving the house and it makes us look fat. (We’re past caring about fat, but still.)

And it’s not just white. It’s the cleanness and smoothness and blandness of it all. I get it – it’s partly representing the ideal of yoga, and it’s partly because clean lines make better photos. But there is such a sameness about it all… same same same. And yoga is about peeling back the layers to reveal who we are, and we are all different!

The worst of all. And shows up all the time when it’s models in photos who have no idea of yoga and are just duplicating an image they’ve been handed. It’s not that they’re a beginning yogi who’s not yet able to go deeper into a posture, it’s that they’re not praticing yoga at all.

The worst offenders? Heads turned at unnatural angles to smile at the camera. Like in Bridge pose. Mind that neck!

Mostly though, stock yoga photos suck because they’re so often false, and yoga is about learning to see what’s actually there.

Yoga is the stripping back of delusion and illusion to reveal the real. It’s coming face to face with reality, sweaty armpits and all, and being ok with that.

It costs a lot of money to do a photo shoot, and it’s far cheaper to use stock photos. However, there are ways and means around anything.

We don’t use stock images on YLB – both because of the reasons above, and also because everyone else uses them and they look bloody boring. They don’t tell a story. There’s no realness to them, and no depth either.

Instead, I’ve done impromptu, unprofessional yoga photo shoots with friends over the years, and taken 100s of crazy yoga photos.

And one real photo shoot with a bonofide photographer, doing my best to stay real with my own yoga clothing (old, and as it turned out, it didn’t look so great in the photos), and no make-up. Plus I actually practiced yoga while the photographer just shot around me. Many of the photos weren’t perfect. I’m often still moving into or out of a posture… but I’m mostly in a State of Yoga.

So if you’re a yoga teacher, a yoga studio, selling yoga products, or have a yoga website, I urge you to avoid stock yoga photos.

Get creative and find ways to source your own yoga photos. Harvest them from your students. Do an exchange with a local photographer. Get a bunch of yoga friends together and go out on location for your own yoga shoot. It’s a blast!

And if you do have to use stock yoga photos, be mindful of the images you choose to represent, yoga and your business. There are some great stock yoga photos out there – you just have to hunt for them. Don’t go for the easy reach, find something that’s real, and has depth.

The last thing the world needs is more fakery – even fake yoga photos.

Bring on the real, in all it’s messiness.

Sure your photos won’t be perfect, and people will have wrinkles and fat and funny hair. But that’s life. And god knows we need more real life in our media-saturated world.

How about you? Any pet peeves in yoga stock photos? Leave a comment, and a link to the worst offending photos. 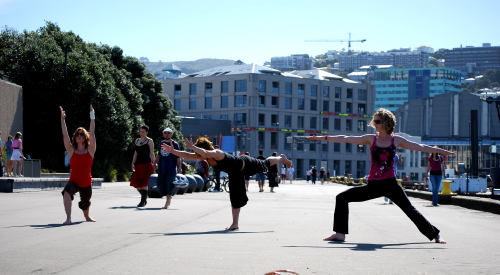 Not so perfect, but tells a story