You are here: Home / ARCHIVE / Energetic Practices / Effects of the Sankalpa in Satyananda Yoga Nidra – Manifesting the positive 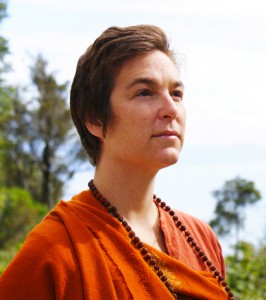 
Many people on the yogic path are committed to self transformation.

This active focus on growth may ignite questioning of one’s own behaviour.  Sometimes, there is genuine desire to change a particular habit or pattern, but try as one may, the cause of the action can be elusive!

Whether resisting or accepting those aspects of the self which seem outside of conscious control, in truth the reactions, perspectives and even external conditions are all a product of patterned responses deeply rooted in the subconscious and unconscious mind, which is normally inaccessible.

If they are not within conscious reach, how then to let go of these negative unconscious patterns and transform into a more positive being?

Satyananda Yoga Nidra provides the tools to ‘weed out’ these unconscious negative patterns and in their stead plant positive seeds deep in the subconscious mind, gradually allowing expression from the highest aspect of the self.

Each and every thing experienced through the senses, from childhood, school, career, interactions with friends and family is recorded and imprinted in the mind. The subconscious and unconscious layers of the mind are beyond the reach of the average human being, but they are the storehouses where all the impressions received via the senses accumulate. The impressions in the mind are held in the form of archetypes or seeds, called samskaras.

These samskaras have the power and capacity to influence behaviour and tendencies in everyday life. Put simply, humans are the result of their deeper mind and its store of countless impressions from the past. It is like looking into a big closet filled with photos, old toys and letters from lovers and friends. There are so many parts of the self stored within the closet that one brief glance over its contents renders it impossible to know exactly what is inside.

One may think consciously, “I want to be positive. I want to overcome my reactions, anger, stress and depression.” But the sneaky pattern, action or negative thought forms often arise before they can be stopped! So what can be done to support positive change and begin to overcome the deep patterns, which may be causing emotional, physical and energetic imbalances? How can these patterns be changed when they seem to stay so well hidden?

Satyananda Yoga Nidra is a deep relaxation technique which enables the pracitioner access to the unconscious mind in a conscious way. By holding the practitioner in the state between waking and sleeping for a significant period of time, Satyananda Yoga Nidra induces a state similar to that of deep sleep. However, unlike normal sleep, where the person is unaware of the external world, in Satyananda Yoga Nidra the awareness is active while the body and mind deeply relaxes.

In the visualization stage of Satyananda Yoga Nidra, with the use of guided imagery, the contents of the unconscious mind can arise and be integrated into the conscious experience.  Sometimes samskaras arise as painful memories, unfulfilled desires, conflicts, fears, etc. or often what arises is just a color or seemingly unrelated images.

Whatever surfaces, it is important to remain the witness of the experience and to view the contents of the mind as a movie. This is easy to do when in the deeply relaxed state of Satyananda Yoga Nidra, but in the every day waking state we cannot normally remain the witness. We react, interact, express from the force of the pattern and thereby often give the negative pattern more energy.

Remaining the witness in a relaxed state will unblock previously repressed and locked up energy so it can be used in other activities. It will also clean out the garden of the mind from the difficult weeds, which cause negativity and illness, and very gradually the positive flowers can be cultivated.

In order to enhance the growth of the positive seeds, Satyananda Yoga Nidra uses the practice of sankalpa.

The sankalpa is a short, positive statement or affirmation, mentally repeated whilst sinking into this deeply relaxed state. In the same way that large companies advertise their products by planting the seeds of desire within the subconscious mind, positive seeds can be planted in the subconscious with the sankalpa, thus affecting the actions of the practitioner  and manifesting profound, positive changes in their life.

The word sankalpa is derived from two Sanskrit root words: sam-‘union’ or ‘together’ and kalpa-‘possibility’- or every possibility in existence. When the sankalpa is used, the awareness is directed to a particular possibility that exists within, presenting a goal which, with repeated use, will gradually manifest.

The difference between sankalpa and a normal new year’s resolution is that the sankalpa is used when the practitoner is in a receptive state. At the time of sankalpa repetition in Satyananda Yoga Nidra, alpha brain waves are dominant. These are the brain waves of relaxation, creativity and receptivity. A resolution stated to the conscious mind is like planting a seed in too little soil. There needs to be enough soil for the root to reach deeply into the ground in order to create a strong and steady plant.

Advertising agencies work on our subconcious mind by consistently exposing us to their images, slogans and jingles. Being subjected to this constant barrage of advertising campaigns seems to have little effect on the conscious mind, yet the subconscious is recording and absorbing every detail of this bombardment.

Although the planting of these constant negative impressions cannot be totally avoided, we can choose to plant positive seeds and water them with the daily practice of sankalpa during Satyananda Yoga Nidra.

In the same way McDonalds always uses the image of the Golden Arches, the slogan ‘I’m Loving It’ and jingles like ‘There’s nothing quite like a McDonalds’, the sankalpa must be stated using the same words and the same intonation at the same stage of the practice each and every time it is repeated. The sankalpa should be chosen carefully, using positive, concise language and should be important to the individual’s purpose.

A sankalpa mentally stated with conviction, faith, and determination used daily will grow very strong roots and will bloom willingly.

One of the sankalpa’s many benefits is its practical application in shifting and transforming mental and physical patterns: It can be used to break a deep-seated habit in cases such as drug or alcohol addiction. Its mental repetition can be used to calm the nervous system whilst under stress. For physical or terminal illnesses it can be utilized to encourage healing, increase will power and promote positive thinking.

Society trains the individual to ignore that the power of transformation lies within. There is always a tendency to blame external factors for unhappiness and difficulties. Stop to question unconscious actions and mental patterns and it can be seen that they are indeed the platform from which the external world is viewed and interacted with. Although the majority do it unconsciously, individuals create their own reality.

Satyananda Yoga Nidra not only teaches that the conscious mind obediently follows in the wake of the subconscious and unconcious mind, it also reveals the gateway to the garden of the deeper mind. Utilising the sankalpa provides the tools needed to plant whatever is desired in the life of each individual. The only limitation is the imagination.

Sow a thought and reap an action

Sow an action and reap a habit

Sow a habit and reap a character

Sow a character and reap a destiny – Swami Sivananda

Swami Karma Karuna is a founding member and director of Anahata Yoga Retreat, New Zealand and a dedicated, intuitive yoga teacher with many years of teaching experience. She has trained Satyananda teacher trainees in Australia, taught Chakra Sadhana in India and works with groups of Yoga Therapists in the USA sharing the therapeutic uses of Satyananda Yoga Nidra.