You are here: Home / Yoga Articles / Deepening • The Yoga of Life / Living Your Yoga / Applying the fifth yama, Aparigraha (non-hoarding), to daily life 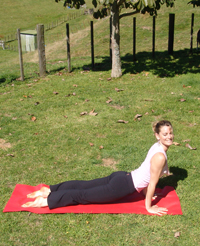 What do we try to possess on our yoga mat?

Of all the yamas, this is the one which, if kept, would have the most profound effect on our western, consumer, materialistic society. If we all lived in such a way that we were non-possessive, non-accumulative, and non-hoarding… it would totally shift our relationship to stuff, to the earth, to ideas, to ego-identity and to each other.

The practice Aparigraha does not require that we get rid of all our stuff, just our attachments to all our stuff – the idea that a car, or a phone, or a pair of jeans can make us happy. And in getting rid of these attachments, we’re able to see clearly what it is that we truly need, and so get rid of anything that we don’t need, the stuff that just weighs us down.

It’s not just stuff that Aparigraha refers to though. It’s also about being possessive of ideas, of people, of places. It’s about anything that we hold on to, act possessively toward or hoard. This intention – to cling to something, is a barrier on the path to enlightenment, or freedom.

One who is not greedy is secure. He has time to think deeply.

His understanding of himself is complete. ~ Yoga Sutra II.39

The more we have, the more we need to take care of it.

The time and energy spent on acquiring more things, protecting them and worrying about them cannot be spent on the most basic questions of life.

What is the limit to what we should possess? For what purpose, for whom and for how long?

Death comes before we have had time to even begin considering these questions. – Translation and commentary by TKV Desikachar

On the material side I get this yama in a big way. Years spent backpacking around the world, living a wanderer’s life (something like 30 different houses in eight years…) means I don’t like to own stuff. Even in the last three years, I’ve moved house eight times. It takes a huge amount of energy to pack up a house and move. So the less stuff the better.

Plus I have a real issue with the massive amounts of poor quality stuff produced by retailers in order to make a buck. I really struggle when I walk into stores like The Warehouse, Briscoes, Jay Jays, Glassons… so much crap, so much landfill, and all for what? Products are quite literally designed to break down within a year or six months so we’re forced to buy more. Electronic companies deliberately change their phone chargers so the old chargers don’t work with new phones. And God forbid we actually come up with a universal charger for all phones – no, no, no… selling brand and model specific accessories increases profits.

It’s a load of garbage.

And that’s right where it all ends up.

So I stay out of those stores as much as possible. Can’t bear to be part of the problem. Instead, most everything I buy is secondhand. And I only get what’s needed. When I do buy new, I’m making an effort to spend the money on quality so that it lasts. I’ve got one pair of shoes I’ve worn every single day since I bought them in April. They’ll last me until I wear them out. Ditto with my jeans. I stick to a dark denim pair, a casual funky pair, and a fun trendy pair. When one pair has had its day, I hit the second-hand stores and find a replacement. Took three years for my last pair to wear out. Gotta love that.

It helps that I don’t give a shit about fashion. I love to feel good, don’t get me wrong, but I know that feeling good is about way more than keeping up with the Jones. I know what suits me, what I like, and what’s worth it. That’s what I buy.

Same thing in our kitchen. All our crockery comes from second-hand stores. None of it matches. It doesn’t matter when something breaks. And when people come over for dinner, what do I care if the dinner set doesn’t match? I mean come on! We’ve only got a handful of each thing. And when we have a party requiring more plates etc, instead of buying plastic, I go to the local Salvation Army, and stock up. It might cost a bit more, but so what?

Even so, contemplating this yama has inspired me to go through the stuff I do own and get rid of everything I don’t need. Just thinking about doing this fills me with glee – I get a sense of spaciousness. Clutter messes with my energy, big time.

So material stuff. No big deal.

What about ideas, or people, or even the past?

A different story. A big part of the journey I’ve been on in the last few weeks has been recognising how much misery I’ve been creating for myself by holding on to the past. Huge amounts. It’s totally coloured the way I interact with my present. When we’ve been hurt before – and who hasn’t – we can try and avoid things and people that might hurt us again. This plays out in our relationships as we avoid intimacy and push away the very people we love because we’re afraid of getting hurt again. It’s a fool’s game because closing up means losing out on love.

Just like the very basis of our society is wrapped around the possessiveness, accumulating and hoarding of stuff, so too do we filter all our interactions with each other through the ideas that we hold on to. We insist that this way is right, or that way is right. We defend our ideas. We justify our ideas. And we spend huge amounts of energy doing it.

Ever got in an argument with a friend about which album is the greatest ever? Or which movie? Which singer? Huge waste of time really because there is no definitive answer. The ‘greatest ever’ is always going to be filtered through our own personal experiences of life. In essence, there are 6.8 billion greatest ever’s. Some might be the same. And some won’t be.

Aparigraha also applies on our yoga mat – for years whenever it came to do Dancer’s pose in a Bikram class, I would think ‘Oh God I hate this pose’. I held on to that idea about Dancer’s so tight… which was of course reflected in my experience of the posture. One day, coming up to Dancer’s, something inspired me to change my mind about it. Maybe the Baron Baptiste DVD I’d been practicing at home. He always talks about faking it until you make it, and on that day in Bikram, I decided to do just that. I changed my internal dialogue about Dancer’s so that I was telling myself ‘Man I love this pose!’

My experience of it completely shifted.

The resistance created by my idea of what the pose was dropped away and I was able to begin to truly experience my body in the pose just as it was.

It’s pretty much the opposite of the way we live now. Our lives, our heads, our timetables and even our virtual realities are stuffed to the brim with stuff. And all this Stuff takes time and energy to maintain. Me, I’m planning to continue to strip my life of the inessential. Clear the clutter. Ditch the sheer weight of obligations that can tie us down.

What about you? What have you discovered this week in the contemplation of aparigraha?

Read the first articles in this series here: